I tallied up the votes from my last quick takes, and the black and white photo won by a huge majority. So that’s the one that’s going up. Thanks for voting, y’all! Now, on to more important business, also related to voting. 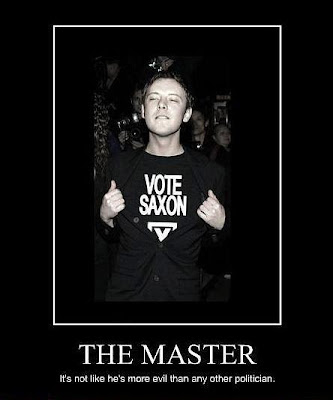 I hate election season. I hate politics, period, even though I read Drudge Report and Hot Air daily. I hate politics because people seem to think that it’s perfectly fine to act like a bunch of whiny and/or violent middle-schoolers when they don’t get their way, and that insulting the other side is a totally acceptable form of debate.

But most of all, I hate politics because all the politicians are so unbearably dull. No one is particularly good, and even the evil ones aren’t deliciously, villainously evil. They’re just evil enough to drown us in bills and despair.

That’s why I’m starting my own campaign. Harold Saxon for President, 2012! Why, you ask? Well, let me explain it to you.

First, Saxon (a.k.a. The Master) brainwashed everyone on earth via a rhythm (incidentally, the same rhythm that made him go completely psycho) embedded in the Archangel Network (a series of satellites that formed a low-level psychic field). Here, let me show you:

Now, why would I prefer this man, who literally brainwashes people, to our current Hopenchanger-in-chief or Mitt “I’m not even as interesting as the mind-numbing sport from which I derive my name” Romney?

Simple. It would restore my faith in humanity if we actually required hypnosis to brainwash us, as opposed to being perfectly amenable to brainwashing via nonsensical campaign slogans. (“Hope and Change”, anyone? Did anyone know how Obama actually planned to implement all these hopeful changes, or did college students across the country just say, “he sounds…good. Like you can trust him”?)

Second, Saxon had chutzpuh. No backhanded or accidental insults from him, no sir. If he didn’t like someone, or even if he was just a bit bored, you’d know it.

Because he’d blow them up.

See what I mean? He doesn’t vaguely insult the overbearing American president. Nope. He just kills him.

But most of all, I’d vote for Harold Saxon because this was a man with a plan. Granted, his plan was to destroy humanity using future humanity via a paradox machine, and then use future humanity to conquer the universe with lots of neat rockets, but damn it, he was gonna see that plan through. He wasn’t about to ruin his country slowly through a series of incomprehensible laws and gradual chipping away at the economic infrastructure; no way. He was going to take everyone out.

Look at that! That is not a world going out with a whimper; that is a world ending with a bang. The bangiest of bangs.

And the other super bonus to electing an overtly, obviously and horrifically evil leader is that we would all know who to fight against. I can’t see anyone defending the toclafane’s right to slaughter humanity, can you? (Yes, maybe PETA, but let’s pretend in our alternate universe that they don’t exist.)

Harold Saxon as President would really help us band together as humans. Look:

(I apologize for the extreme cheese you just witnessed. It was not one of Doctor Who’s finest moments.)

Would we likely be totally slaughtered if we tried to defeat a common enemy with only the power of our thoughts? Uh, yeah. But we’re Americans, you know, so we’d probably have the good sense to bring guns too, which would definitely up our chances. Humanity banding together with guns to fight against a common evil sounds like just what we need right now. Clear, identifiable evil, a common goal, and a guilt-free outlet for our collective pent-up rage.

Trust me, when we’re standing side-by-side with sawed-off shotguns and nothing to lose, you’ll be glad you did.

June 12, 2012 I Suck at Suffering
Recent Comments
0 | Leave a Comment
Browse Our Archives
Related posts from Barefoot and Pregnant

Catholic
A Cross to Bear
Barefoot and Pregnant