A Song and a Psalm for the Sabbath: Psalm 51

Psalm 51 gets a special mention with this weeks readings, so I’ve set it off with this post I’ve been holding for this week.

I’ve associated Psalm 51 with the Sacrament since I first read it. Like many Psalms, this one is a prayer, similar in tone to Ezra’s prayer. An extremely sorrowful and penitent Psalm that expresses remorse and desire for cleansing as well as faith in God’s power to bring those things about, I can think of no Psalm more appropriate to be in mind during our ritual renewal of covenant, with its promise of spirit and atonement. The heading places this Psalm in David’s mouth after his commission of adultery and murder. Various details suggest that the heading was added much later, and the original composition is unlikely to reflect that setting (e.g. in commission of these two major sins, does David really sin against God alone per v.4 ?). Yet that setting and depth of sin and despair add to the literary power of the Psalm.

Years ago, I heard a piece of music with Latin text. I didn’t know what it was, but it touched me. When I discovered that it was Psalm 51 set to music, my appreciation doubled. According to Wikipedia, it was written by Allegri around 1514, only performed in the Vatican during Easter, and forbidden to be written down or performed elsewhere. When Mozart was 14 and in Rome, he heard it on a Wednesday, wrote the whole thing from memory, then made minor corrections on Friday when he heard it again. That version was eventually published and performed in London in 1771, and has become very popular, with many versions. This one has the English lyrics shown. I suggest starting the music, and reading through my eclectic translation below.

1 To the music director: A Psalm of David, when Nathan the prophet visited him after David slept with Bathsheba.

Have mercy on me, O God, in keeping with Your kindness,1
according to Your abundant mercies, wipe away my transgressions. 2

2 Wash me thoroughly from my iniquity,

purify me from my sin

3 I know my transgressions,

and my sin is always on my mind.

4 Against You and You alone have I sinned,

and done evil in your eyes.

So you are indeed justified in speaking against me,

and in the right when you pass judgment

5 Indeed, in iniquity was I brought forth,

in sin did my mother bear me.3

6 Indeed, reliability is what You want on the inside4,

so teach me wisdom5 in the hidden place.

7 De-sin me with hyssop that I may be pure

cleanse me, that I may be whiter than snow!6

let the bones you crushed shout for gladness!

9 Hide your face from my sins,

wipe away all my iniquities.

renew a reliable spirit within me!

11 Do not exclude me from Your presence, nor

take your holy spirit from me.

12 Return to me the joy of your salvation, and

uphold in me a willing spirit.

13 Then may I teach transgressors your ways,

sinners will turn back to you!

God of my salvation, my tongue will wax lyrical of your good deeds!

15 Lord, open my lips that my mouth may declare your praises!

16 Animal sacrifices of any kind are not what You really want, or I would offer them 8

17 Rather, for God true sacrifice consists of a broken spirit;

You will not reject a broken and a crushed9 heart, O God.

18 Do good to Zion 10 as You will,
build the walls of Jerusalem!

19 Then You will take pleasure in righteous sacrifices, burnt offering and whole offering; then shall bulls be offered on your altar.

1 Traditionally “mercy.” Heb. ḥesed is theologically significant and “so pregnant with meaning as to defy translation.” Declaration and Covenant, A Comprehensive Review of Covenant Formulae from the Old Testament and the Ancient Near East, p.42 Both “covenant loyalty” as well as “mercy, lovingkindness” are part of its broad meaning. Sometimes it is a noun synonym for “covenant.” In the well-known Hosea 6:6, it is what God desires from humans more than sacrifice.  “For I desired mercy (ḥesed), and not sacrifice; and the knowledge of God more than burnt offerings. (Hos 6:6 KJV) Return to post

2 Pesha’ “transgression,” ‘avon “iniquity,” and ḥatta’ “sin” are used interchangeably throughout the text. Return to post
3 The implication here is not “original sin” but rather a tendency towards sin since birth. Return to post
4 KJV “truth” but the semantic range of “truth” is overly narrow for ’emet here.  Return to post
5 If this verse is to be read with the previous one about birth and conception, then “inside” and “hidden place” (both obscure Hebrew) may refer to the womb. See the Word Biblical Commentary for discussion.  Return to post
6  These two phrases either represent declarations of faith “(if) you cleanse me, I will be whiter than snow!” or more likely purpose/result clauses “cleanse me, so that I may be whiter than snow.” Return to post
7 For Israelites, the heart was the center of conscious thought, not the center of emotion/feeling as the modern mind/heart dichotomy would have it. Return to post

8 The syntax here can be read a few ways, and this is one of the more dynamic renderings. Return to post
9 Also dynamic. The first line reads “sacrifices of God are a broken spirit” with ‘elohim paralleling the vocative “O god” in the second line. The intent is to indicate what God really wants, God-like sacrifices, sacrifices acceptable to God. Trationally rendered as “sacrifice” zebach means “slaughter (of an animal)”; this passage is one of very few in the Old Testament where “sacrifice” does not refer to “ritual slaughter of an animal.” Also note, that this broken heart and contrite spirit is associated with sacrifice (and thereby, covenant) in the Old Testament itself. That association is not something that replaces sacrifice, per certain readings of 3 Nephi 9:20 and 12:19. Rather, it was understood to be part of sacrifice from when it was instituted. Cf. 2 Nephi 2:7, 4:32 Return to post
10 Jerusalem’s walls did not need to be rebuilt until late in Israelite history. Either this verse is a later addition or the Psalm was composed very late. Return to post 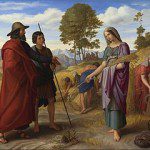 July 2, 2014 Update and Notes: Podcast Transcripts, Holy Land posts, and Jacksonville Fireside in mid-July
Recent Comments
1 Comment | Leave a Comment
Browse Our Archives
get the latest from
Latter-day Saint
Sign up for our newsletter
Related posts from Benjamin the Scribe