How I Taught Lesson 12

Last Saturday night, I was asked to pinch hit for Gospel Doctrine. Since my posts here aren’t written as lesson plans, what and how I teach often differ significantly from what I write. Our lesson ended with some text criticism, close reading, and critical thinking about tradition, and by the end of the lesson, I had a coherent thread tying it all together. This write-up is both minimal and all from memory, though.

We started by having everyone read John 5:1-18, the pericope about the paralyzed man who had waited 30+ years at the Pool of Bethesda to be healed by the moving water of the pool. We talked about the background of the pool a bit, and then moved into why they were there. We reread vss. 3-4.

3 In these lay a great multitude of impotent folk, of blind, halt, withered, waiting for the moving of the water. 4 For an angel went down at a certain season into the pool, and troubled the water: whosoever then first after the troubling of the water stepped in was made whole of whatsoever disease he had. (Joh 5:3-4 KJV)

We pointed out that there were many people there. “Now, who has a different translation of the Bible?”… crickets… “Really? no one has a different translation on their phone or tablet?” …crickets… (I’d guess 80% of the audience had electronic devices.) “Ok…” I sent everyone to their browser, to http://netbible.org, John 5:3-4. While they looked it up, I talked about the NET Bible, one of those I recommend because it’s accessible, free, and has so many footnotes explaining the translation and alternates. Then, I had someone read starting in v. 3.

3 A great number of sick, blind, lame, and paralyzed people were lying in these walkways. 45 Now a man was there who had been disabled for thirty-eight years. (Joh 5:3-5 NET)

As soon as he got to “now a man…,” I said “wait wait, what happened to the last part of 3 and all of 4? Where’s the explanation of the angel?”

Most modern translations omit the end of 3 and 4, because the oldest and best Greek mss. do not have anything there. The text is a late scribal gloss explaining the apparently common traditional explanation for why the water moved on occasion. Was that tradition true? Seems pretty unlikely. (FWIW, this pool also had non-Jews waiting there, it wasn’t just a Jewish tradition.)

So we talked briefly about the advantages of using modern translations, Apostolic citations of modern translations in the Ensign and General Conference, and the local Stake President’s usage of both the Jewish Study Bible and the Harper-Collins Study Bible, based on the NRSV. That was our text-criticism. If you’re interested in that kind of thing, I recommend you pick up this (accessible to non-specialists) or this (a bit more technical.)

Then we looked at this again from a different angle. This tradition was strong enough that this man had waited there for his chance for 38 years. Thirty-eight years! That’s a strong tradition. I explained that these later Greek manuscripts accurately (in all probability) represented an authentic tradition, something many people around the pool believed but wasn’t necessarily true.

I asked, “do we similarly have traditions in the Church? Things commonly believed that have been passed down, but aren’t necessarily true or well-founded?” Crickets, again.

Someone suggested caffeine, and I gave some brief background on the origins of that tradition with PhD chemist and Apostle John Widtsoe and his wife Leah. Someone else suggested “the Three Nephites” and those stories. Not a lot of suggestions about “tradition” though…

So I pulled out my copy (as I’d planned) of Deseret Book’s President Kimball bio, by his son, and gave some background on it. Then I read my commentary on this from the biography, on the power of tradition and one specific tradition.

President Kimball’s biography recounts that Joseph Fielding Smith was asked in 1963 whether it was necessary for faithful Latter-day Saints to believe that black men were denied the priesthood because of their activities in the preexistence. He replied,“Yes.” But when… asked for scriptural substantiation, Elder Smith reread the relevant passages, reflected, then finally stated, “No, you do not have to believe that Negroes are denied the priesthood because of the pre-existence.  I have always assumed that because it was what I was taught, and it made sense, but you don’t have to believe it to be in good standing, because it is not definitely stated in the scriptures. And I have received no revelation on the matter. (chapter 20, p5, footnote 12 of the PDF draft included in the book.)

The combination of tradition (“it was what I was taught”) and worldview (“it made sense”) contributed towards the assumption that such a tradition accurately represented God’s prior revelations on the matter as found in the canon. We talked about that a little, and moved back to John.

Eventually, we moved out of that passage to read John 5:39, a (former?) Scripture Mastery passage.

Search the scriptures; for in them ye think ye have eternal life: and they are they which testify of me. (Joh 5:39 KJV)

“Ok, back to your NET bible. Someone read it there?”

“Stop. What’s the difference between these two translations, in the very first word?”

The KJV reads the Greek as a command, whereas the NET and many other modern translations read it as a statement, an observation. The Greek mss. don’t vary there, the Greek form is formally ambiguous. However, context shows that the NET is correct. I also pointed out that the NET adds the adverb “diligently” because it’s a continuous verb, “you study the scriptures continuously, repeatedly, frequently.”

I then wrote this on the board.

“You search the scriptures, for in them

What’s the difference between A and B, I asked?

A is the text of the KJV, and B is our “counter-text”, playing with what the text doesn’t say in order to figure out what the actual text means. How does it change the meaning when we drop out “ye think”?

The inclusion of it suggests that the statement “in them ye have eternal life” is Jesus’ observation about something they think, which he disagrees with, not a general statement of truth. (And indeed, John likes to use this verb “to think” as “to think incorrectly” e.g. John 11:13, 16:2. But you don’t need to know Greek to pick up on that, just read closely.)

What Jesus is saying, if we read on, is that his opponents study scripture constantly because they think (wrongly!) that that’s where eternal life is to be found… yet those scriptures point to him! He’s right there but they don’t accept him! Certainly we should study our scriptures closely, but that’s not what this passage is saying.

I closed by pointing out that in Jesus’ day, very few people could actually “study the scriptures” constantly or closely because a) very few people could read and b) even fewer people had access to Torah scrolls or Greek translations because of cost. Without scripture, most people were dependent upon oral tradition and the regular Sabbath reading of a few passages. Today, however, we all have scriptures, multiple free translations we can download at all and the vast majority of us are literate… Do we study the scriptures closely, or do we base ourselves and our teachings on tradition we assume are scriptural? Do we focus on what scripture points to, Christ the savior?

That’s how lesson 12 went in my ward. Apparently, they liked it. 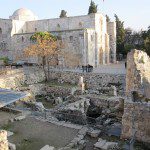