I’ve gotten behind, due to some unanticipated red-eye travel cross-country, spontaneous camping in Nauvoo with extended family, intensive home-improvement-on-a-tight-deadline, etc. I’ll try to catch up by taking a page out of a new book. 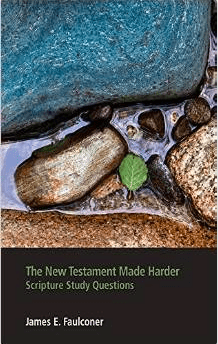 Faulconer is a philosophy professor at BYU, who previously wrote Scripture Study: Tools and Suggestions (Amazon, Maxwell Institute) and a lot of other things (more here, with some overlap.) I like Faulconer’s stuff so much, I recruited him to be a columnist at Patheos back when I worked for the site. I’m predisposed to like his material.

This book is part of his Made Harder series on the scriptures. (Rumor was the Old Testament volume was going to be called The Old Testament Made Even Harder.) It’s not a standard commentary series, nor like any other kind of commentary. Rather, each chapter corresponds to the New Testament lesson reading assignments, and contains thought-questions about the text. Occasionally it brings in a little outside information, often to provide set-up for a particular question. These are not questions like the manual asks, in the sense that I suspect many of these questions don’t have a specific answer.

What good is such a book and such questions? Faulconer repeats a formative story in the introduction. Early on in his studies, he spent a semester studying Genesis one-on-one with one of his professors, who was also a rabbi. Faulconer came with some typical questions.

“If you are a religious person, why would you be interested in questions like these?” he asked. “They have nothing to do with what is important about this reading.”

One of the things he learned from the experience and models in the book, is that the kinds of questions we ask have a huge effect on our study and teaching. Indeed, Faulconer says

“that experience was life changing. It showed me a way of reading scripture I’d not been aware of previously…. I’d never read with the attention to detail that the rabbi was showing, and I’d never read asking questions of the text that generated additional questions for me. But this way of reading wasn’t a way of making the scriptures easy to understand. It was a way of making me stop and think about them, a way of forcing me to reconsider what I thought I already knew. It is not too much to say that it was a way of making the scriptures harder. It didn’t make their content any more difficult to understand, but it did force me to work harder as I read.” x-xi.

I’ve written before about taking notes (part 1, part 2, part 3), and one of the productive things I keep in my notes is questions I’ve had.  NTMD basically represents some of Faulconer’s best questions, useful for personal study, as well as Sunday School, Seminary, or Institute teaching. I’ll incorporate a few into each lesson from now on.  Today, I’ll include a few, and some of my thoughts.

Surely Jesus doesn’t mean that if we pray enough we’ll get whatever we want, right? Is the parable about God’s motives, then? His tendencies? Is it relevant that the woman is petitioning the judge for justice?

N.T. Wright points out (though it is obscured in English), both this parable and the following one about the tax-collector and the pharisee are both about being “justified” or “righteous.” The widow wants the judge to pass legal judgment justifying her against her legal opponent, declaring her to be in the right.  Similarly, with the tax-collector and pharisee, the result is a declaration by God that the tax-collector who humbles himself is in the right (v.14), not the other guy who paid extra tithing and such.

After an intro, Faulconer offers these questions on Luke 18 (I’ve only typed out part of it)

The word translated faint means “to become weary or exhausted” and can mean “lose heart.” (For examples of places where Paul uses the term, See 2Th 3:13, 2Co 4:1,16; and Gal 6:9). What kind of fainting or exhaustion do you think Luke has in mind?

In verse 2, we find that the judge neither fears God nor regards man. What does the second mean? Are the two phrases parallel, and if they are, does understanding the first help us understand the second/ What does “feared not God neither regarded man” tell us about this judge? Is this a positive or negative description?

The King James Version (verse 3) says that the woman “came unto” the judge, but a more accurate translation might be “she kept coming to him.” A better translation than avenge is defend, plead my case. What is the woman asking, and why do you think she has to keep coming to the judge?” 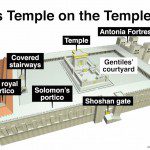 June 7, 2015 New Testament Gospel Doctrine Lesson 20: Matt 21:1-11, 23-46; 23; John 12:1-8
Recent Comments
2 Comments | Leave a Comment
"I just completed reading your paper The Israelite Roots of Atonement Terminology. Thank you for ..."
Minette Ngalu Gearing Up For Isaiah
"Even if the Gospels are eyewitness accounts, they are definitely not reliable sources. See here:https://lutherwasnotbornaga..."
Gary M Brief NT Introduction and Gospel Doctrine ..."
"Ben. A couple of comments on your references: ANYTHING by Raymond Brown is excellent. The ..."
CalSailor Virtual Sperry Fireside On Reading the ..."
"This is a great move! Looking forward to using your new website ."
DeAnn Spencer We’ve moved!
Browse Our Archives
Related posts from Benjamin the Scribe