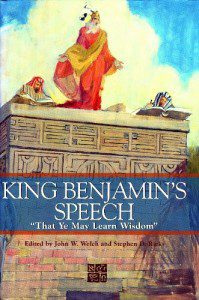 To open, we need some big picture structural discussion.

Mosiah 1 is not Mosiah 1. In fact, it is Mosiah 3, ppeand the first two chapters are missing. How do we know this?

First, Book of Mormon books tend to be named after the first and major character, but Mosiah opens with… Benjamin, not his father Mosiah1.

Second, books usually get some kind of intro, but Mosiah starts in media res– “AND now there was no more contention in all the land of Zarahemla, among all the people who belonged to king Benjamin, so that king Benjamin had continual peace all the remainder of his days.”

The image above is a screenshot from p.117 of the Printer’s Mss here.

Chapters 1-2 (which presumably talk about Mosiah Sr) were part of the 116 lost pages. According to the Words of Mormon, and a theory widely held by many different people, the Book of Mormon originally started with the Book of Lehi, and then went to Mosiah. That’s what Joseph Smith started translating. What Words of Mormon 1:3 says, is that when Mormon had already abridged the Large Plates (with the Book of Lehi and then the Book of Mosiah) down to King Benjamin, he found the small plates, and tacked them on. If this is correct, then the Small Plates were at the back of the Book of Mormon, and were also translated last, but then placed in the front where they belonged chronologically. (Where were the Title Page and the Words of Mormon on the plates? Unclear.) Among others, see here.

That volume includes a lengthy almost-verse-by-verse commentary, here, with lots of good stuff throughout. At least in these initial chapters, I don’t have much to add, so I’ll summarize briefly with my own minor twists.

Benjamin has Mosiah make a proclamation for people to gather at the temple, with tents, in family groups. In private, he chooses Mosiah, and passes on to him the tokens of kingship. Once the people gather,

Benjamin’s speech at the temple is covenantal, ritual, and governmental. It is partly inspired/related by an angel (3:2ff) who appeared to Benjamin because he had “heard his prayers and judged his rightousness.” (The connection between those two things is that praying with upraised hands, as the Israelites did, exposes the hands and heart to God, an invitation in essence to evaluate and judge one’s actions (hands) and intent (heart) and therefore grant the prayer, as happened with Benjamin.  This was a frequent posture of public prayer in the Bible (e.g. Isaiah 1:15, 1Ki 8:22) and among the Israelites’ neighbors, as well as in the early LDS church. The sacrament prayer was sometimes offered with upraised hands, for example. See the article here.)

At the chapter 3/4 break, Benjamin pauses relating the angel’s message, and takes stock of the people, which is where we end today.

Most of chapter 3 appears to be verbatim quotes from the angel. Is it so? If an angel woke you up in the middle of the night, and told you25+ verses, could you remember it verbatim? This is the angel’s words, as remembered by Benjamin as written down by someone, as edited by Mormon 400AD. So there is proabably a bit of slippage, or at least, ancient audiences (if we can generalize) did not expect “verbatim quotes” to be verbatim quotes. “Ancient readers knew this, and were not expected to believe that such speeches were merely reproductions of what was really said on a given occasion.” (Steve Mason, writing about ancient history in Josephus and the New Testament, which is a bit removed from the Book of Mormon, obviously.)

April 30, 2016 BoM Gospel Doctrine Lesson 16: Mosiah 4-6
Recent Comments
1 Comment | Leave a Comment
"I just completed reading your paper The Israelite Roots of Atonement Terminology. Thank you for ..."
Minette Ngalu Gearing Up For Isaiah
"Even if the Gospels are eyewitness accounts, they are definitely not reliable sources. See here:https://lutherwasnotbornaga..."
Gary M Brief NT Introduction and Gospel Doctrine ..."
"Ben. A couple of comments on your references: ANYTHING by Raymond Brown is excellent. The ..."
CalSailor Virtual Sperry Fireside On Reading the ..."
"This is a great move! Looking forward to using your new website ."
DeAnn Spencer We’ve moved!
Browse Our Archives
get the latest from
Latter-day Saint
Sign up for our newsletter
Related posts from Benjamin the Scribe