Link to the lesson manual.

Today, I’ve got a bit of writing about these chapters in General, an article I wrote in the past on Genesis 38, and some useful tidbits

Before talking about the stories in today’s chapters, let’s introduce a relevant principle. When we get to Exodus 20 in a few weeks, we’ll encounter the idea that God is “a jealous God, punishing children for the iniquity of parents, to the third and the fourth generation of those who reject me” (Exo 20:5). There’s a particular interpretation of this I like, but first let’s counter the context-free “mean Old Testament deity” interpretation by pointing out that in the next verse God is said to “show kindness to the thousandth generation of those who love Me and keep My commandments.” If we are to understand these as saying that God punishes even the 4th generation of children for the parent’s sin, let us point out that if the parental faithfulness reverberates equally down through not the 4th but thousandth generation. The rhetoric portrays God as 250x more “merciful/kind/loving/loyal” than he is punitive. (It’s hard to translate ḥesed. See this excerpt from the Anchor Yale Bible Dictionary, “Love.”) However, let’s take a different tack. Some have looked at the first verse from a sociological perspective; parental sins and mistakes often echo down through the lives of their children for several generations because children emulate their parents, not because of divine decree.

I’ve brought up this verse in order to take a closer look at the chain of deception initiated by Jacob and how that reverberates through his children and grandchildren. Not all of these examples are direct, but I believe they are included in the text and made literarily significant in order to demonstrate something like Exodus 20:5. “Deceive, and both you and your children in turn will deceive and be deceived.” So who deceives whom, and with what?

For Genesis 38, here’s an article I wrote a few years ago in Religious Educator that explains what’s going on and shows  a few of the connections to  the surrounding chapters. Please read that as the rest of this post. And if you need background on Religious Educator, go here. 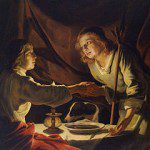 March 20, 2018 An essay on the nature of prophetic knowledge, with a side helping of evolution
Recent Comments
8 Comments | Leave a Comment
Browse Our Archives
Related posts from Benjamin the Scribe