Who Put Bathsheba on the Roof? Leonard Cohen and Failure to Study in Context, That’s Who

Apparently, the idea has entered popular consciousness that in 2 Samuel 11, Bathsheba herself was on the roof. I’ve actually been confused as to why people seem to think this, since the text doesn’t actually say so; It’s David who was on his flat palace roof, trying to cool off. So, where is this idea coming from that Bathsheba was “bathing” on the roof?

I suggest one popular source, Jeff Buckley’s popularization of Leonard Cohen’s song “Hallelujah,” which references David and Bathsheba.  It includes the lyrics, “you saw her bathing on the roof.” Now, I suppose it could be understood as “you saw her bathing [while you were] on the roof” but that seems to flout Grice’s linguistic maxims.

I suspect most people hear this song and imagine Bathsheba, having a bath on her own roof. Such a ridiculous thing, at least in our cultural understanding of bathing and roofs, could have no other purpose than self-display and seduction. It’s been painted this way by, e.g. Jean-Leon Gérome in 1899. 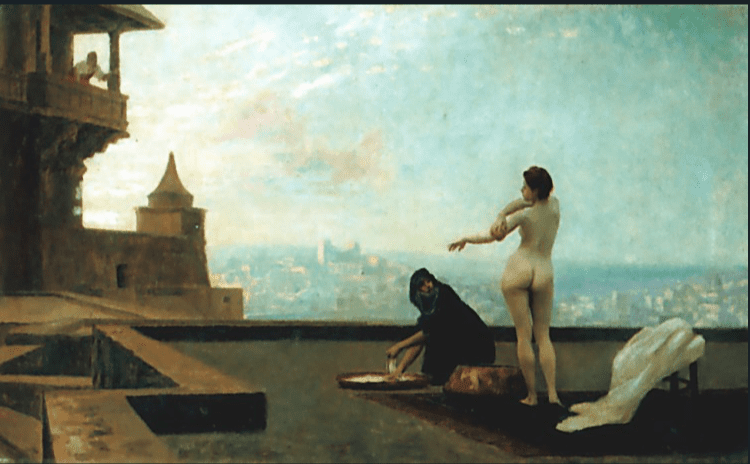 This is just another example of how tradition and culture influence us without our even being aware. This is what happens when we read scripture completely unaware of ancient context, so insert here a strong plug for reading a modern study bible (like the Jewish Study Bible) and studying the bible in context.

While Cohen/Buckley and some tradition disambiguate the Bible in favor of Bathsheba’s “seduction” like the flagrant painting above, it is just as unjustifiable to disambiguate the Bible in the other direction and make Bathsheba completely innocent. Both of these disambiguate, because the text itself is ambiguous… and we don’t like ambiguity that. The text is heavily focused on David’s abuse of power, but are there hints? I think so, but in both directions. That’s for another post.

As always, you can help me pay my tuition here,. You can also get updates by email whenever a post goes up (subscription box on the right). You can also follow Benjamin the Scribe on Facebook. 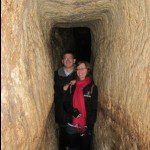 August 4, 2018 Old Testament Gospel Doctrine Lesson 30: 2 Chronicles 29–30; 32; 34
Recent Comments
0 | Leave a Comment
"I just completed reading your paper The Israelite Roots of Atonement Terminology. Thank you for ..."
Minette Ngalu Gearing Up For Isaiah
"Even if the Gospels are eyewitness accounts, they are definitely not reliable sources. See here:https://lutherwasnotbornaga..."
Gary M Brief NT Introduction and Gospel Doctrine ..."
"Ben. A couple of comments on your references: ANYTHING by Raymond Brown is excellent. The ..."
CalSailor Virtual Sperry Fireside On Reading the ..."
"This is a great move! Looking forward to using your new website ."
DeAnn Spencer We’ve moved!
Browse Our Archives
Related posts from Benjamin the Scribe