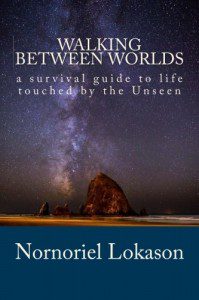 I think it’s a wonderful thing that we live in an age when self-publishing is at our fingertips.  I say this because fellow Patheos and PaganSquare writer Nornoriel Lokason’s new book, Walking Between Worlds, billed as “a survival guide to life touched by the Unseen,” would never have gone farther across any publisher’s desk except for the trash pile.  And that would be a damned shame because this is a sparkling gem of a book.

Some people have to work at spirit contact.  They struggle for a lifetime to reach out to the Unseen world and catch glimpses of it with a lot of work and persistence.  Others get hit over the head with the “you’re-now-a-medium stick” and the intrusions of the Unseen world are impossible for them to ignore.  If you are one of the latter, this book is for you.

But it’s got rough edges.  Nornoriel writes like he writes in his personal blog The Serpent’s Labyrinth, which I enjoy (actually, I recognize a few passages from that blog.)  He’s crass, sarcastic, informal, and vulgar; by which I mean he swears a little bit.  It’s especially interesting to read in juxtaposition to Brendan Myers’ flowing, liquid prose (I’m also currently reading one of his books and will post that review soon.)  But that’s what I like about Nornoriel as a writer.  Radical honesty.  He tells it like he sees it and he doesn’t put sugar-coating on it.  And in the realm of dealing with spirits, I think that’s a very good thing.  There are some hard issues that come up when you’re walking in the spirit world that need some direct approaches.  It’s like drawing down Hecate; don’t ask Her a question if you don’t want the answer in bold type!

Actually he writes a lot like I try to teach.  His style is direct, open, and he draws extensively from his own personal experience.  This gives his readers something they can identify with and relate to.  I even found myself going, “Yeah!  That’s right!  That’s how it was for me too!” on several occasions.  He makes a point, then explains why he thought it was important in connection to his own life experience, and then explains what worked for him to deal with it.  He’s also very good at saying, “You can try these things” rather than “this is the way to do it,” which is marvelous because not every single technique works for everyone; and also at saying, “I don’t know for sure” or “I don’t have any easy solutions.”

Significant points that I think are outstanding:

Not everybody is going to like this book.  There is at least one reviewer on Amazon who absolutely hated it.  And none of her criticisms are unfair.  Nornoriel obviously copied a great deal of this book directly from his blog.  Which is fine by me, except that he never got around to editing “blog” and “post” out of his work, and I admit, I find that distracting in a book.  It’s heavy with internet slang.  It’s often repetitive and probably more than a few pages could have been saved if some of that had been cut (or perhaps compressed).  And I have to admit, as much as I support his stance 100%, the repeated “I’ll do things my way and you have no right to tell me I’m wrong, who are you to tell me how to live my life so shut up!” does get tiresome after awhile.  He might have made his point better if he had just said, “if you don’t like it, see above.”  (Though I can’t say I disagree with any of his views of the people he would like to butt out; I have had similar encounters with many of these sorts of people and I wish they would bug off too.)

The reviewer said that he probably would have benefited from an editor.  I can’t disagree.  I do, however, disagree with the reviewer’s opinion that any of these criticisms wreck the book.  And even though I do think that he should hire one, I also think that an editor would have to be very careful not to lose Nornoriel’s unique style and voice, because that would destroy what makes this book so excellent.  Nornoriel writes as if you were in the room chatting with him.  I understand he’s also a fiction writer.  I bet his dialogue is brilliant.

If you have never experienced the sort of weirdness that has you talking to, what Nornoriel calls with friendly self-depreciating humour, “your new invisible friends,” then Nornoriel is going to seem like a complete nutcase to you.  But that’s okay, because this book wasn’t written for you.  It was written for people who are born with mediumship and shamanic abilities, or suddenly experience them, in ways that simply cannot be ignored or denied.  I am going to recommend it to three or four people that I know because they need it badly.  And I’m going to make sure to keep a copy on my bookshelf for the next desperately lost and frightened spiritworker-student who crosses my path.

For those of you who like ratings systems, I am giving “Walking Between Worlds”:

You can get it on Amazon for the very reasonable price of $13.49 for a trade paperback; or at Etsy for a little less for a pdf e-book. 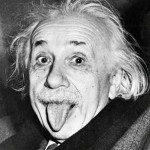 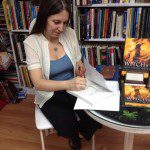 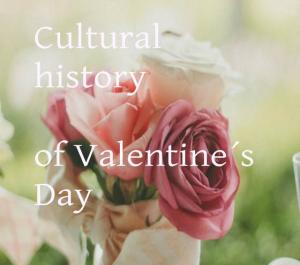