Seekers and Guides: A Short Ritual for the New Year

Seekers and Guides: A Short Ritual for the New Year December 29, 2014 Sable Aradia

I like to look at the holiday season as a liminal time.  The change from the old year to the new year is not on the Pagan Sabbat calendar, but it’s still a magical time that we have rituals for in our culture (and other cultures also share in this; the turn of the year, for example, is big in Asia and in North American-Asian communities).  Here’s a little non-tradition-specific ritual to acknowledge the change with some of our North American customs but also throw in a Pagan sense of the sacred.  It shouldn’t cost you much and you can do it as a solitary or as a group.

Light the candle at about a quarter to midnight on December 31.  Make the space sacred in whatever way you prefer.

Imbue the chosen food item with the energy of the past year, using the candle as a focus.  Consider what you learned, what you gained, and what you have to be thankful for.  Eat the food with the intention of accepting the gifts given in an “attitude of gratitude.”  Consciously thank the Old Year for its gifts and lessons.  If you like, you may also thank your household gods and spirits for protecting you through the year and make offering to them at this time.

Fill the drinking container with your chosen drink and set it by the candle.

Observe the countdown to midnight in whatever manner you prefer.  Listen to the radio, gather around your clock to count down the seconds, or turn on your TV and watch the descent of the ball in Times Square.

At the stroke of midnight, bellow “Happy New Year!” and make noise!  (I like to go to my door and blow a horn three times at the threshold.  For me this invites the Wild Hunt to chase ill-meaning energies and spirits away.)  Maybe sing “Auld Lang Syne” if you don’t have noisemakers (or just want to).  Traditionally, all the noise scares away evil spirits.

Take the broom and sweep negative energy out of the house, ending with your most-used entranceway.  Shut the door firmly on it and lay the broom across the doorframe.  This symbolically seals the threshold against the return of what you’ve banished.  (I also view it as an omen; the first person who crosses the threshold and steps over the broom will have a powerful effect on the household in the next year.  I usually leave it until it has been crossed by both someone from the household and a guest.)  If you don’t want to leave it for a long time because it’s in the way, at least try to leave the broom for the night before you remove it.

Imbue the drink with the energy of promises and hope for the New Year and make a celebratory toast, drinking deeply of the liquid.  This would be a good time to make oaths, New Year’s resolutions, or engage in the Norse “brag and boast” custom. Drink all of the liquid (and make sure to offer some to the household spirits also, if that is part of your custom.)

Thank the gods you follow and extinguish the candle; or leave it burn for the rest of the night until it goes out, symbolizing the light of hope in darkness (to do that, you can often put it in a kitchen sink if you’re worried about possible accidents; even if it spills over, sinks are usually fireproof.)

That’s it!  Happy New Year to you! 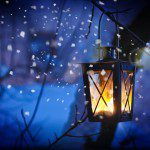 January 2, 2015 A Requiem Ritual for an Unborn Child
Recent Comments
0 | Leave a Comment
Browse Our Archives
get the latest from
Pagan
Sign up for our newsletter
POPULAR AT PATHEOS Pagan
1

Watch Hilda not Sabrina if You...
Dandelionlady
Related posts from Between the Shadows