This is my first time contributing an article for the Patheos Public Square and I’m excited about engaging in some interfaith dialogue with my fellow and sister Patheos faith writers!

One thing we Pagans have learned is that sometimes, collective action accomplishes what individual action can only dream of accomplishing.  We’re not very good at creating peace among ourselves, however.  “Witch Wars” is a term we use to describe internal conflicts within a Pagan community or group and they happen frequently.  I think this is because we come from groups that are disproportionately disempowered.  We are a bunch of misfits, highly individualistic by nature, held together by our rejection of the status quo.  We are a countercultural movement by definition.

Mostly, we believe in doing things collectively, as individuals.  If everybody does their small part towards contributing to reducing their carbon footprint, for example, there is a possibility that we will make a real difference in reducing the damaging effects to our environment.  Or as some of us with a more New Age bend like to say, “Be the change that you want to see in the world.”

I cannot speak for everyone, but I will speak for myself.  Here are my resolutions to improve peace that I will take on in 2015.  I believe that if we, as individuals, resolve to do these things, collectively, that will bring peace wherever it can be brought.

I resolve not to judge anyone; but I reserve the right to exercise my discernment.  I will keep an open mind, and I will work very hard to understand and forgive everyone their frailties; gods know I have enough of my own. But I will not censor my better judgment when I know that something is not right.  “Avoiding conflict” is by no means a synonym for “making peace.”  It builds anger and resentment, and allows injustice and abuse to continue unchecked.

I resolve to work towards greater understanding in my relationships with people.  Fear of the unknown, or misunderstanding of intent, cause the most disagreements.  I will work to place myself in the viewpoints of others and learn about their ways and beliefs as much as I can.

I resolve not to assume that I know better than anyone else.  This will be applied to belief, politics, and logical discourse.  I will allow myself the luxury of pointing out when something is factually wrong, but I refuse to allow myself the Argument of Incredulity.  Just because I don’t like it, doesn’t mean it’s wrong.

I resolve, when I join a group, to act in the best interests of the group; not myself.  This is a big problem in Pagan communities, as people jockey for power positions instead of encouraging the well-being of all.  I think it’s a problem in world politics too.  I think this is due to fear of exclusion.  If you run the group, you can’t be excluded.

I resolve to assume that everyone has the best of intentions; though I will try to be prepared for the worst.  Many times we jump at shadows in our communications.  Islam is not engaged in a conspiracy to destroy Christianity and the Western World, and I will not assume that when dealing with Muslims because that would not only be ridiculous, it would be prejudicial (and such attitudes are often thinly-disguised racism anyway.)  But it turns out the CIA really were doing experiments on American citizens without their knowledge or consent.  I refuse to be blind to evidence of wrongdoing; and though I may occasionally be wrong and be required to engage in some pretty deep apologies, I know that my actions will also protect others.

I resolve to reach out in kindness whenever possible.  One of the members of my community, whose name is Dallas, decided to try to take on one random act of kindness per day in 2015, and asked the rest of us to meet the challenge.  I’m doing okay so far but I haven’t left the house yet much!  A simple moment of kindness and compassion can heal so much, it can even save lives.  A word of compassion at the right time can change the world for one, or many, people.  Each day I will ask myself: How can I be kind today?

I resolve to do, and accept, my just and equal share.  Allowing others to carry us along by their efforts builds resentment.  I am no more nor less important than anyone else, and I will do my part; though my part may be of a different nature than that of others.  Nor will I be greedy, because greed has caused almost as much evil as cowardice in this world, and greed is born of fear of not getting enough.  But neither will I accept less than my share, because then I will build up resentment.  Such an imbalance is innately unsustainable.

I resolve to defend the underdog.  It is said that a society can be judged by how it treats the least of its members.  If we will stand up for the weakest of the group, together we are stronger.

I resolve not to tolerate abuse of myself or anyone else, be it spiritual, emotional, physical or mental.  “No justice; no peace!”

I resolve to try not to believe that I am entitled.  We are entitled to human rights; no less, and no more.  Everything else in life must be earned.  If we all had this attitude, much pain would be ended.  We’re not – not any one of us – “specially special.”  Nothing we have done under the sun is original and we are not in any way superior to anyone else on the street.  I believe that coming to this conclusion, and developing “right-sized ego” is one of the most important goals of Wiccan/ate practice.

I resolve to try to respect everyone.  There are numerous problematic beliefs that purport to “justify” a lack of respect.  Since many Pagan traditions believe in magick, we try to protect ourselves by believing that misfortune can’t happen to us if we are good people or worthy magicians.  It’s just not true, any more than being “right with God” makes you less likely to experience these things.  Magick can influence probabilities (I believe,) but sometimes the odds are just really bad, no matter what you do, and you’ll get the least bad of seven bad things. “There but for the grace of God go I.”  Just remember that the next time you decide to sneer at a crack addict panhandling.  Also: politeness is a form of respect.  I will try to be polite.

Though I resolve to speak my truth, I will do it in the least hurtful way possible.  I will take a deep breath before replying when angry.  I will consider carefully the words I use.  I will delete the angry comments I start writing for YouTube or Tumblr or Facebook without posting them (because who needs to get into that poo-flinging contest really?)

I resolve to focus daily on manifesting these intentions.  In other words, I will pray for the ability to do it.  I will light candles to Brighid and ask Her to help me learn peace, mercy and love.  I will meditate under the stars on how to be better at this.  I will take a lesson from early Christianity and try to love all whom I meet.  I will take a lesson from Thelema and I will remember that “every man and every woman (and everyone who is both or neither or some mix thereof) is a Star.” 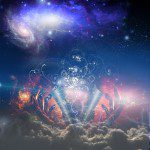 January 10, 2015 Faith, Feminism and Gender
Recent Comments
0 | Leave a Comment
Browse Our Archives
get the latest from
Pagan
Sign up for our newsletter
POPULAR AT PATHEOS Pagan
1