Okay, so check this out:

Let’s say you fire two electrons out of a box at the same time.  If one spins upwards, the other must spin downwards.  They change from moment to moment as to which one is which.  So if you observe one as spinning up, you know the other is spinning down; or if you cause one to spin up, then the other, by default, will be forced to spin down.

Now let’s put one of these electrons on the moon and leave the other one on Earth.  You would think that with such a distance separating the two, one would no longer be affected in any way by what you’re done to the other.

This video explains the whole process really well.  They call it “quantum entanglement”:

Now I have to admit, as a sci-fi geek and a witch and magician, this whole concept gives me goosebumps.

Quantum computing takes the binary functions of computers and applies them at the quantum (subatomic) level.  Remember that binary code works in particular combinations of 0s and 1s.  Everything is either a value of 0, or a value of 1, and this encodes the computer’s instructions that tell it how to run.  The integers of a quantum computer would be both 0 and 1 at the same time, and when the value of one of those integers is decided, this would have the immediate effect of deciding the value of its entangled integer.  In this manner, instructions could be given to a computer, and information processed, instantaneously; that is, faster than the speed of light!  This isn’t science fiction: scientists are working on this concept right now.

It gets better.  Quantum teleportation transmits energy instantly from one location to another, through the use of quantum computing and quantum entanglement.  In the most recent successful experiment, scientists sent one entangled photon along a 25 kilometre length of optic fibre and sent the other into a crystal.  The first was bombarded with a third photon, which destroys it.  Except that the information remains stored in the crystal.

Hmm, information stored in crystals, eh?  Well, we already knew it was possible with silicon; you’re reading this, aren’t you?  Maybe those New Age crystal programming types are quite so crazy after all . . .

The implications from a magickal perspective are mind-boggling.  First of all, if we know for a fact that information can be transferred over long distances instantaneously due to quantum entanglement, what implications might that have for the possibility of psychic phenomena?  Also, this principle lends some support to magickal theories such as the Law of Sympathetic Magick and the Law of Contagion.  Sympathetic magick tells us that to create a link with something else, we should use something that is strongly symbolic of or resembles the thing we’re trying to affect with your magick (which is why poppets are used to affect people, particularly in the area of body and health.)  The Law of Contagion tells us that anything that was once in contact with anything else (especially if it was for a long time; especially if it contains a person’s DNA) maintains a link to it, and so if you do something to the “linked” thing, it also affects the thing to which it was linked (which is why the poppets often contain hair, fingernail clippings, or possibly a piece of cloth with a person’s sweat on it.)  Are these mental triggers that formulate the human will into accessing (and affecting) quantum information?

Hmm; maybe we shouldn’t be so smug about what we believe is, and isn’t, possible, should we? 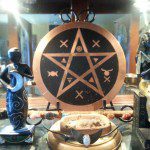 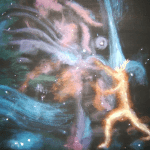 January 23, 2015 Old Hornie
Recent Comments
0 | Leave a Comment
Browse Our Archives
get the latest from
Pagan
Sign up for our newsletter
POPULAR AT PATHEOS Pagan
1

Building For A Future We Won’t...
John Beckett
Related posts from Between the Shadows