As Above, So Below

As Above, So Below – What do you seek from the Divine? How is that reflected in the mundane? Where do you find your place of synthesis?

I did something I really love to do yesterday.  I was able to speak to a spiritual entity – in this case, a god – to help facilitate the bridging of the gap between the worlds for Him and a girl on this plane.  She’s a beautiful, compassionate, empathic young woman who reminds me of my younger self in a lot of ways.  One of those ways was in her sensitivity.  I was so raw when I was her age.  Every grain of sand that rubbed me was a shard of glass that cut me and made me bleed.  I see this in her, and I see all those scars on my own spirit, and I fear for her.

But she’s not alone.  She has developed a personal relationship with Loki, who has stepped up to protect her.  I don’t work with Loki a great deal but I’ve always had a soft spot for Him because He’s a perpetual outsider who’s probably too bright for His own good.  And I love a guy who can make me laugh!  She was nervous and having some trouble being sure that her Unverified Personal Gnosis was “good.”  I was pleased to be able to confirm much of it.

Opening the gates is always a little risky.  Not all of the entities on the other side (or, if you prefer, brewing in our subconscious) are friendly.  Some of them are hostile and dangerous.  So if I’m going to do this kind of thing I always do it in dedicated Temple space.  I also question whether or not the entity that has come by (or emerged from my subconscious soup; which it is exactly is a matter of perspective as far as I am concerned) is the one I’m seeking.  I was satisfied that this was indeed Loki that I was dealing with and I proceeded with the Work. I felt very much like I imagine that a translator in the UN must feel.  Or maybe a relationship councilor.  She made me this lovely work of art to thank me for my efforts. I feel exactly the same way towards her.  I made a friend, and I believe I made a difference.

Maybe you don’t believe in spirit realms and literal deities.  Hey, that’s cool; I don’t have a problem with that.  I’m not really sure how it all works myself though I do have some ideas.  But either way, the fact of the matter is that whether they come from the human consciousness or not they have to be dealt with.  Sometimes they’re hostile.  Sometimes they’re helpful.  But either way, they are part of us, and always have been, and our culture no longer has any idea how to deal with them.

Part of the reason is that in a world of facts and figures, dealing with anything that defies rational explanation is challenging.  You can’t see gods and spirits, so how can they exist?  Yet every day, otherwise “perfectly rational” people come to mediums, hedgewitches and psychics because they are having an experience that defies rational explanation (at least currently,) and they need help putting it into context.

A hard core rationalist might decide that we’re all mentally ill.  I won’t lie; running a metaphysical store taught me that metaphysics are a great place for the benignly crazy to hide, and it’s not a bad place for the malignantly crazy to hide either; especially because of the Curse of Pagan Niceness.  But you know, I live with a schizophrenic; one who has been known to have legitimate paranoid delusions and hallucinations (he’s medicated and mostly it’s not a problem, but every now and then it can be.)  There is a difference between his “voices,” which seem as real and tangible to him as I am; and the entities that spirit-workers deal with.  We are aware that they exist only in the spirit realm.   The stuff that they “say” flashes into our heads like distant memories of conversations.  And that differs, again, from the conversations between characters that happen in my imagination when I am writing fiction.

Now again, I’m not going to assert that these beings are literal.  They might not be; I accept and own the doubt.  I don’t have enough hubris to believe that I hold the keys to the universe and people who do not experience these things are in some way “deficient,” as many spirit-workers often accuse them of being.  But neither are these beings hallucinations, delusions, or the figments of my imagination.  They are something else, perhaps spawned of shared human consciousness.  Perhaps they’re one of those shared mob delusions.  And maybe they really do exist in a different dimension.  Faerie, Annwn, Alfheim and the Dreamtime might all be parallel universes slightly out of phase with our own, just like in a Star Trek transporter accident episode.

At any rate, sometimes we reach across that Veil, as others have called it, and there’s a connection.  Someone has to deal with that stuff.  And that’s where I come in.  I love the work because I really feel like I make a difference. I feel like all the suffering I’ve put up with because I was so weird as a kid has a purpose.  I love teaching the Craft for the same reason.  For me, witchcraft is all about personal empowerment.  I live for the eureka moment in the eyes of my students, when they seize their own power back from the world that would strip it away.  But best of all is when I’m teaching others how to bridge that gap between the worlds for themselves so that they, too, can touch the numinous and speak directly to the wonder that is the Divine.  For this, I have given my life to the Pagan path and the deities that choose to participate in the crazy multi-faith hodgepodge that is the Pagan community.

I have integrated the Pagan path and the work I do into my life more fully than most.  I have to do things specifically to keep in touch with Mundania, and I choose to do them so that my ability to communicate what I have gleaned isn’t lost completely in the ether of theological rhetoric or the obscurity of Academia.  Or, as the common vernacular suggests, I don’t want to become so heavenly bound that I’m no earthly good!  If the ear I turn to the Divine cannot connect to the mouth that speaks with my sister and fellow mortals, then what use am I and how can the messages of the Divine be heard?  And it works the other way around too; sometimes spirit-entities need to be reminded that physical bodies have special needs, limitations, and powers that beings of pure spirit do not.

So what do I seek from the Divine? I seek a lot of things.  For myself, I seek the numinous.  I want to touch and taste the Mysteries.  I want to experience that sense of being something more than myself; and being just a small part of something that is more than myself.  I want to breathe stars and drink the spaces between quanta.  How do I reflect this in the mundane?  I teach; I do spirit-work; I write; I make music.  All of this is to share what I’ve learned about dancing in the stars and the spaces between the stars, and maybe to help someone else to find their own meaning in it.  Where do I find my place of synthesis?  I find it in the Work and in the knowledge that I have reached others.  As Joseph Campbell said, all the lessons of the Hero’s Journey mean nothing and serve no purpose until the Hero returns from the journey and shares what she has learned with the people in the World she came from.

As above, so below. 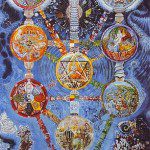 March 9, 2015
Seekers and Guides: Knowledge, Wisdom and Gnosis
Next Post 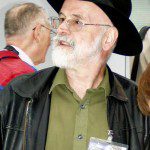 March 13, 2015 Belief Makes it Real: In Memoriam of Terry Pratchett
Recent Comments
0 | Leave a Comment
Browse Our Archives
Related posts from Between the Shadows