It was my honour and privilege to be asked to serve as a keynote presenter at Gaia Gathering: the Canadian National Pagan Conference this year.  This is the text of my address.  In person I asked questions of the audience rather than engaging my own views (such as what our common mythologies might be; and I’m pleased to note that others generally agreed with my suggestions), and it was written as a speech that addresses a Canadian Pagan audience so please keep that in mind when reading.  It’s considerably longer than my usual posts but I thought I had a message that was worth sharing.  I hope that if the subject interests you, you’ll take some time and read it and offer your thoughts.

I’d like to extend my heartfelt thanks to the organizers of the event, both the national board and the local committee, for the invitation and for showing me such a good time.  I’m looking forward to the next one!

Good morning.  My name is Sable Aradia, and I’m very honoured to have been invited to do a keynote presentation here at the Canadian National Pagan Conference.  Today I’d like to consider a contentious and many-layered subject: Pagan Theology.

Theology is either “the systematic study of the existence and nature of the divine and its relationship to and influence upon other beings,”[i] or “a specific branch of this study, undertaken from the perspective of a particular group.”[ii] We’ve tried to avoid this subject in recent years for fear of angering everyone else.  But I believe that avoiding a subject just makes it more difficult when it finally breaks through the surface of our repression.  If it’s contentious, I think that talking about it is even more important.

Part One: The Importance of Theology

Chaos theory tells us that at the beginning of a thing, even extremely small variations can have long-reaching and permanent effects.  We live in interesting times.  Paganism, as practiced in the modern era, is a new religion.  Even if you practice a Reconstructionist tradition, our Paganisms are being interpreted in new ways, as part of a broader spectrum, for a modern people.  In other words, this is the beginning.

Here, now, in this room – we have found ourselves in the position of the Christian church fathers.  Not because we are special snowflakes; not because we’re particularly bright, or particularly interesting, or particularly charismatic; but because we are the ones taking an interest who are here at the beginning.  Everything we write, everything we blog, everything we say about the subject, will become foundational doctrine for the Pagans of the future.  That is, if Pagans exist in the future; and that’s by no means assured, especially if we’re willing to bury what makes us unique in the mire of fads and popular opinion.

Think of it!  Someday someone in a school of theology, pursuing the future equivalent of a doctorate of divinity, will quote the works of Brendan Myers or Kerr Cuhulain in the same essay as the writings of St. Augustine!

Our Pagan ancestors had theology, and their theology was involved and complex.  From our Stone Age animist roots to the elaborate cultures of Ancient Greece and Ancient Egypt, our Pagan ancestors had consistent spiritual understandings of the world, though there were many variations and they debated those understandings extensively.  They were faced with many of the same issues that we are faced with now, such as what to do when one encounters a vastly different theological perspective.  Some (like the Greeks) chose syncretism and eclecticism; others (like the Romans) chose a mostly “live and let live” path; still others (like the Aztecs) chose to enforce their theology with war.  We, too, will have to make such choices.  We’re in the process of making them right here, right now.

I doubt that Augustine considered the future impact of his work when he was creating it; and as I learned in the writing of this speech, thinking about it too much can result in paralyzing fear and self-doubt.  Augustine was just giving serious thought to his young faith and trying to figure it out and understand what it meant.  He probably had no idea that his interpretation of the myth of Eden, and his take on the concept of “original sin,” would result in the theologically-supported oppression and abuse of women and anyone designated as being of a lower class for almost two millennia.  He was just trying to understand why life was so hard when an omnipotent God could just fix all that.  Small seeds will grow into very big thickets.

But one good thing about Pagans is that we tend to be pretty self-aware.  I think we should consider this.  I don’t think it should stop us from coming to the conclusions we believe are right, but we need to consider the possible consequences of those conclusions.

We don’t want to have this conversation.  That’s because of something I call the Curse of Pagan Niceness.  The problem is that we’re so eager to get along and to not rock the boat in any way that we allow antagonists into our midst whose goals are not to have meaningful exchanges of faith or even to just celebrate with other like-minded people.  We respond to challenges with a recitation of our rights to individual beliefs, even when those challenges are intended to destroy rather than to merely invite debate.

Out there in the blogosphere the community is dividing itself along theological rifts.  I think that, largely fueled by the black-and-white, right-and-left political climate of the United States, the Pagan blogosphere wants to separate things into dualities and then tell us why everyone not on their side is wrong and is trying to destroy civilization.

I think there’s a better way.  I believe that perhaps Canada is uniquely suited to provide a model as a framework for that process.  In Canada, at least in principle, we believe in a “cultural mosaic.”  We are happy – again, at least in principle – to embrace anyone of any race or cultural background, who is willing to adhere to a handful of “core Canadian values,” as a Canadian.

I think we are present at a time at which we find it necessary to decide on some “core Pagan values.”  We know what Paganism is – we recognize it when we see it – but we have difficulty articulating this.  Then, once we have decided, collectively, on those values, we can embrace all those who would be part of Paganism without needing to fight so hard to assert who we are, lest we lose it.

Ultimately my goal for today is to consider some of these values; the things that unite and divide us, the things that make us who we are; and to propose a vision of Paganism that is as inclusive as possible without compromising its internal sense of identity.  I hope to spark similar thoughts and conversations.  Like most Pagan theologians I will qualify my statements by saying that these are merely my opinions and in some cases, not even opinions, but thoughts and questions. I do not believe I have all the answers.  But I’ve been doing this for a long time now and I practice, read, and write quite a lot about the subject, and I hope that at the very least, what I have to say will inspire all of you to think about it.

One of the reasons that faith exists is to confront, and possibly answer, some of the big questions about life, the universe, and everything.  Perhaps there is a consistent Pagan theology in our beliefs about those things.  What do you think?

I bet that none of us have the same answers to those questions.  I bet that some of us have even more than one answer for some of those questions!  (Like me.)  Part of that is because the modern Pagan movement is so new that we’re still trying to figure all of that out.

But remember that the title of this presentation isn’t “creating” Pagan theology.  It’s “reawakening” it.  Other Pagans who preceded the Christian world had their own ideas about those sorts of things, didn’t they?  And though much of what we’re doing is new, we are looking to those old beliefs.  I wonder what the ancient Babylonians thought about Du’at.  What did the Egyptians think of Elysium?  What did the Romans think about Annwn?  When they collided with other cultures, did the ancient Pagans argue that the Otherworlds of those cultures were delusional?  Did they view these other realms as the same ones they knew about, only with different names?  Or did they decide not to worry about it on the assumption that Norsemen go to Niflheim and Asgard, and Celts go to Annwn or Tir Nan Og?

We don’t really know because for two thousand years or more the followers of some religions have been slaughtering everyone who doesn’t agree with them.  Even most of the literature we have from those cultures has been copied with particular spins by the peoples who ultimately supplanted them; “de-Christianizing” Pagan literature is a constant challenge for the historian.  So anything we do at this point is starting over and rebuilding.  The sleeping giant of Paganism has actually been in a coma, not taking a cat-nap.  That deep of a sleep, for that length of time, means that there will be significant changes in personality; and – let’s be honest – a lot of physical therapy is needed.

It’s a beautiful thing that we can all share the same faith, or faith-group, and have such differing beliefs.   I hope we can maintain that because it’s one of the aspects of Paganism that I love most.  But obviously, core beliefs about life, the universe, and everything are not what bind us together.  I guess we have to look elsewhere. 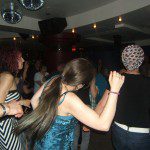 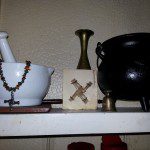 May 28, 2015 A Devotional for Brighid
Recent Comments
0 | Leave a Comment
Browse Our Archives
Related posts from Between the Shadows