People of the River by W. Michael Gear
My rating: 4 of 5 stars

This is my first acquaintance with these writers, who have written a whole series of historical novels about the First Nations. I was hesitant because these do not sound like First Nations names, but I figured since they are archeologists they couldn’t be too bad.

In this novel, the Mississippian culture, known for their enormous earth mounds to archaeologists and having a high culture that was somewhat comparable to the high cultures of the Central American First Nations, is in serious trouble. Historically the culture fell apart when a climate shift between a several hundred years’ wet spell and a drier change occurred. In the O’Gears’ novel, this is because the Sun Chief, the high chief of the Mississippian Nations, has done something to offend the spirit of First Woman, who has the power to show people to the opening to the underworld, or to bar the way; and also, because their culture, in exacting tribute from the surrounding villages, has brought harm to the local people and to Earth Mother by its greedy ways. The story centers around three Dreamers, or shamans, whose spiritual quests to resolve the issue have real-world effects, thus making this more of a magical realism/fantasy novel than historical fiction (which I don’t mind, because I love that kind of thing, but in a way I’d like to give their publishers hell for false advertising), and around two warriors in service to the Sun Chief, who are aware that he’s gone insane, and that the things they are being ordered to do are morally wrong, but who can’t see a way out of the situation without the complete collapse of their culture.

I really enjoyed this look into the spirituality of the First Nations of the Mississippi and a glimpse into their world, but I have some caveats to this. First of all, I really could have used less descriptions of the necklaces and kirtles that were worn by the first cousin of the best friend of the warrior’s wife, if you see what I’m saying. I imagine this is a fault of being archaeologists, because they think all of that stuff is fascinating, but I would have personally preferred it were left for important situations, such as what a warrior of the Starborn caste wears compared to what a ruling chieftain of the Sunborn caste wears compared to what the common people wear, and I would prefer it were kept to the main characters. I think the book could have been about a hundred pages shorter, which was very frustrating, especially since I was reading it for a reading challenge that had an imminent deadline. Second, I got a strong sense of European conceit. For instance, the authors insisted on referring to the ruler of the nation, highest of the Sunborn caste, as High Chief, when I don’t think “King” would have been inappropriate, since that’s what he was. I don’t know if this is some particularity of archaeology, in which “Chief” and “King” might have some very specific meanings, but to me it seemed like they were not quite granting the Mississippian culture the respect it deserved. Certainly the power of the High Chief was as vast and as absolute as that of any of the ancient Middle Eastern priest-kings, if this story is to be taken as a quality novelization of a historical culture; and “Chief” is certainly not what they called him at all, since that is an English word and I’m certain their title was in the Mississippian language.

But, it was interesting how small a scale we were discussing, and perhaps that’s why the particular titles were chosen. The Sun Chief could command an army of a thousand warriors, which was frightening enough that most of the surrounding nations had to combine their forces in order to oppose him. I suppose that sounds like a lot, but ancient armies usually numbered in the thousands in the Middle East and Mediterranean.

Despite my criticisms and a slow build, the story kept me glued to the pages about a hundred pages in, and it kept me riveted to the edge of my seat by the last hundred pages. Really a good read, and I learned a lot about the Mississippian First Nations besides the point. What made it even more interesting to me is that about the time I finished the book, I was travelling in and around the Great Lakes, which of course are not that far north of the book’s location; and as a matter of fact, the characters made reference to trade with the First Nations of the Great Lakes. Since I’m from British Columbia, it made it all the more immediate, somehow. All in all, an excellent read that I would recommend, and I’ll probably pick up the rest of the O’Gears’ “People” books in time. 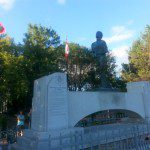 October 15, 2016 A Quest for Canada
Recent Comments
0 | Leave a Comment
Browse Our Archives
get the latest from
Between the Shadows
Sign up for our newsletter
POPULAR AT PATHEOS Pagan
1

An’ it Harm None, Do What...
Beneath the Moon
Related posts from Between the Shadows