Latinisms, Western Diction, and the Provenance of Mark’s Gospel 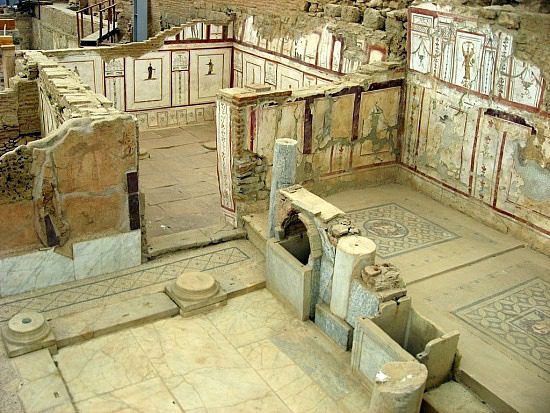 Sometime ago, my good friend and colleague Richard Bauckham wrote an intriguing book entitled The Gospel for all Christians. Actually the book began as an essay, but in any case the thesis of the book was that the Gospels were not written, or were not just written, for some specific target audience, but for a broad group of Christian churches.

Richard and I discussed this, and in due course he allowed that maybe the Gospels were written for both a specific local audience and also with one eye on the larger Christian audience as well. Maybe. But I would want to stress that whatever else we say, we cannot afford to under-stress the particularity of the Gospels, and their specific provenances. We are going to do a series of posts about an intriguing and helpful recent book— Alan Millard’s, Reading and Writing in the Time of Jesus. This is actually the stimulus for this post as well.

Scholars have long been curious about the use of ‘foreign’ terms and phrases in NT Greek. One subset of those terms is the use of Latinisms, in our NT. There are some 18 Latin words found embedded in NT texts, but no less than 10 of them are found in Mark’s Gospel which is in fact more than in any other literary Greek text we know of from antiquity (see Millard p. 148).

In two places Mark pauses to explain Jewish terms with Latin terms. For example at Mk. 12.42 he explains the two lepta of the widow using the Latin term ‘quadrans’, and at Mk. 15.16 he refers to the governor’s hall as the ‘praetorium’. Other examples in Mark would be the use of the term ‘modius’ in Mk. 4.21 for a measuring vessel, or ‘census’ in Mk. 12.14, or the use of ‘flagellare’ to refer to the whipping of Jesus (Mk. 15.15). There is in addition the use of the term ‘sextarius’ for a measuring cup (only in Mark), the use of ‘speculator’ for a member of the governor’s staff (only in Mark), and so on. Something has to account for these loan words showing up in Mark in greater profusion than anywhere else in the NT, especially in the first two cases where terms are explaining by means of Latin. Indeed, over half of the Latinisms in the NT are in Mark.

Now if you have read your Mark commentaries, you will know that most commentators rightly take this as a clue to Mark’s provenance, namely that it was not merely written in Rome, but for Romans (hence the Latin explanations), and this fits nicely with the testimony of Papias that Mark took down memoranda of Peter in Rome.

But this leads to further clues. Let us take for a moment the term we come across in Mk. 7.26— Syro-Phonecian, a term the First Evangelist converts to ‘a Canaanite woman’. The term Syro-Phoenician does not stand alone in ancient vocabulary, it has a parallel term -Libo-Phoenician. We are talking about two places in the Mediterranean where Phoenicians once ruled the day— one on the coast of modern day Lebanon, the other on the coast of north Africa. But here is the deal— these labels were not used by the locals to describe themselves, these are the labels Westerners, and in particular Romans used to describe these two regions and their peoples.

Again we have a clear clue, as clear as one could want, that the provenance is Roman for this Gospel– and more particularly it was written for Romans who used such terms. Mark himself, not being from Rome, had no need nor inclination to use such terms, except in so far as the they communicated something to the target audience.

This of course is evidence that there was a target audience— Romans. Now, I am quite willing to allow that Mark hoped and trusted his Gospel might circulate to a wider Christian audience, as it has done, but in the first instance he is addressing a particular Roman audience. Which makes the next fact all the more striking.

Scholars have often noticed the ‘Semitic interference’ in Mark’s Gospel. This phrase means we have evidence from awkward Greek phrases and use of terms that the author has been thinking in one language and expressing himself in another— rather like me thinking in English and trying to speak German to my friends in Germany.

Maurice Casey in a remarkable monograph entitled Aramaic Sources in Mark’s Gospel (CUP, 2007) has even argued in detail that large chunks of Mark’s Gospel can be shown to have originally been composed in Aramaic, and then translated into Greek, sometimes well, sometimes poorly.

The compelling evidence of Semitic interference in Mark adds some real spice to the provenance debate. Now we have an author writing for Westerners, who himself is clearly an easterner, an Aramaic speaker, which even the vast majority of Jews outside the Holy Land were not. We learn something of where the author came from, from this evidence.

And of course the fact that our Mark has to explain to his audience the meaning of Aramaic phrases like ‘Talitha kumi’ in Mk. 5.41 means of course that he knows Aramaic, but his audience most certainly does not. Contrast Luke, who leaves out every one of Mark’s Aramaic phrases in the parallel passages in his Gospel, presumably because Luke himself (and his audience) knows no Aramaic at all.

In short, there are vocabulary and linguistic clues in a document like Mark which not only help us to figure out the provenance of a Gospel, it also provides us with very specific evidence that the document had a specific provenance, a specific audience in mind, written by a particular author.

November 2, 2011 Reading and Writing in Herodian Israel-- Was Jesus an Illiterate Peasant? Part One
Browse Our Archives
Related posts from The Bible and Culture