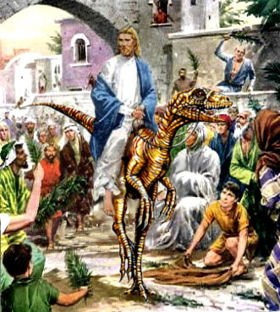 I enjoy fairy tales as much as the next person (see the picture on the right), and some of the best fictional early Christian stories from the late second through the early fourth century are Gnostic fairy tales. It would appear that someone has found a fragment of such a tale and handed it to Harvard Professor Karen King. Here is the link to the NY times article—– http://www.nytimes.com/2012/09/19/us/historian-says-piece-of-papyrus-refers-to-jesus-wife.html?_r=2. My caution would be as long as the document is unprovenanced we cannot be absolutely sure of its authenticity or origins. But perhaps in due course we will learn more of where it came from. I would put my money on southern Egypt, since it is in Sahidic.

Professor King is cautious to make clear that she is not making any claims about the historical Jesus being married. But she is adamant that we have a clear reference to a ‘wife’ in this tiny scrap of papyrus. It maybe be a genuine ancient Sahidic Coptic text (Greek characters, Sahidic language). Roger Bagnall may be correct about that, though the document is yet to be properly carbon dated. It’s so tiny, it is probably precarious to do so anyway. What is suspicious as some scholars have now noted is: 1) the shape of the document, and 2) the fact that it appears to have been cut off at the top in modernity. Richard Bauckham has told me he thinks it is likely to be a forgery and this is the clear opinion of many of those who were at the Coptic conference in Rome where King unveiled this manuscript. Here is a link to some of the discussion—-http://evangelicaltextualcriticism.blogspot.co.uk/

Here is a picture of the document– 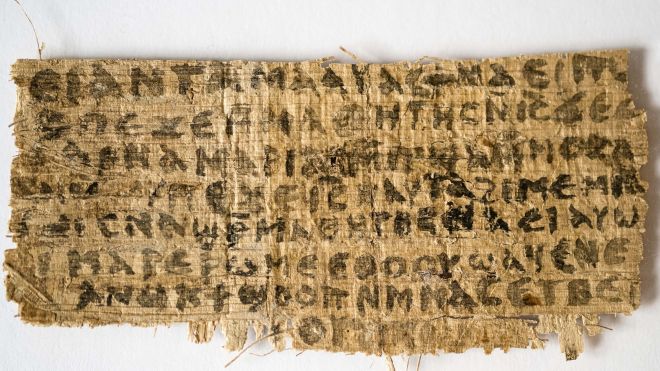 Here is a rendering of what the document actually says….

What is not said in the N.Y. Times article, but should be said is that in view of the largely ascetic character of Gnosticism, if this is genuine it is likely that we are dealing with the ‘sister-wife’ phenomena, and the reference is to a strictly spiritual relationship which is close, but does not involve sexual intimacy.

You can already see the evidence of this in other Gnostic texts which talk about kissing, but the chaste kissing in question refers to a Gnostic belief in which, through a kiss, esoteric knowledge is conveyed from the kisser to the kissee. In other words, this is no confirmation of the Da Vinci Code or even of the idea that the Gnostics thought Jesus was married in the normal sense of the word. Probably not.

In any case, a Gnostic fragment from the fourth century A.D. cannot be taken seriously if the question is— Is it making an actual claim about the historical Jesus based on some hitherto unknown historical evidence? The answer to that question must be no, not least because the Gnostics were not really interested in the Jesus of history, the pre-Easter Jesus. Their writings again and again focus on the exalted Jesus, the post-Easter Jesus and his esoteric teachings post-mortem. Furthermore, there were no Gnostics in the first century A.D. and no Gnostic movement as far as we can tell, that early. Gnosticism arose out of a Gentile ethos, not a Jewish one and indeed many Gnostic texts are profoundly anti-Semitic, not to mention anti the God of the OT and the whole theology of creation found in the OT (see my book The Gospel Code).

Here are some of Larry Hurtado’s recent cautionary reflections on this find….

———-
The Coptic of line 4 of the text appears to have Jesus referring to “my wife/woman”, but it is actually not explicit that this refers to the “Mary” mentioned in the preceding line as “worthy”. The two phrases might refer to the same person, or might not. Confident claims that Mary is the “wife/woman” in line 4 are inferences.

Calling the putative larger writing from which this fragment may derive “The Gospel of Jesus’ Wife” is a bit over the top. If all we had were a fragment of the Gospel of John where Jesus heals the blind man, would we refer to “The Gospel of the Blind Man”? Probably not. It’s a fascinating fragment and we should all be grateful for Prof. King making it so public. But it’s a huge leap to take two Coptic words in line 4 (“my wife/woman”) as indicative of the focus and larger contents of whatever writing from which the fragment derives.
It’s also a bit of a leap to propose that the text reflects some supposed larger sexual-political standpoint in early Christianity. We simply don’t know this. Prof. King has a strong scholarly investment in the idea, and I respect that. But let’s avoid suspending moutains from this thread.
There is nothing particularly shocking about saying that Jesus has a wife. In fact there are several references in the New Testament that come to mind: In Ephesians 5:22-33, the relationship and duties of husbands to their wives are likened to the relationship of Jesus and the church, and the author here takes the Genesis 2:24 phrasing about “a man shall leave his father and mother and be joined to his wife and the two will become one flesh,” as “a great mystery” which he applies “to Christ and the church”. Still more explicitly, in Revelation 21:9-14, the seer is shown a vision of “the bride, the wife of the Lamb” (“the Lamb” in Revelation a recurrent image for Jesus).

These are obviously metaphorical, you will say, and rightly so. But the point is that the fragment doesn’t actually say clearly either who the “wife/woman” is or the nature of the marriage relationship in question. It’s going waaay beyond the text to read into it uncritically some sort of romantic relationship between Jesus and a “wife/woman” in any real sense. Maybe . . . maybe not. It is entirely possible that the fragment is part of a writing of a more esoteric nature (other examples include texts often referred to as “gnostic”, such as Gospel of Philip), and in these texts words often don’t carry their usual meaning. That’s a large part of being esoteric!
So, let’s (1) be grateful for what looks like a fragment of some hitherto unknown early Christian text, and (2) hope that scholarly analysis will continue on all relevant questions, and (3) take along generous quantities of salt as we read the over-excited (and somewhat tendentious) reporting about the fragment in the news media.
———

Thus while this fragment is interesting if your baileywick is the history of the heretical sect called Gnosticism, if on the other hand you are interested in the Jesus of history, this is much ado about not very much.

September 24, 2012
Margaret Mitchell's Paul, The Corinthians, and the Birth of Hermeneutics Part Three
Next Post

September 25, 2012 A Moment of Grace--- Nine Months Out
Browse Our Archives
get the latest updates from
The Bible and Culture
and the Patheos
Evangelical
Channel
POPULAR AT PATHEOS Evangelical
1

That's Not How Any Of This...
Preventing Grace
Books by This Author Books by Ben Witherington

Evangelical
A Podcast on Pursuing a Teaching Career and...
The Bible and Culture

Evangelical
On Spiritual Practices
The Bible and Culture

China's extermination camps
Are we as brave as we think we are? Many Christians wonder...
view all Evangelical blogs
Copyright 2008-2021, Patheos. All rights reserved.