Jesus and his Disciples—- What’s in a Word 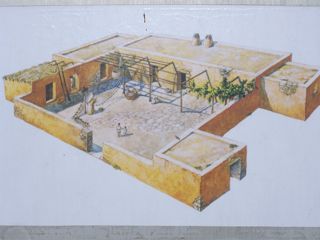 (A schematic of the large house of the fisherman unearthed in Bethsaida— hometown of Peter and Andrew).

The term mathetes is thrown around a lot in church these days, usually translated ‘disciple’. It’s actual literal sense is a ‘learner’ but often it means something more like ‘adherent’. Interestingly, this term does not really show up in the NT outside of the Gospels and Acts, and in Acts the usage seems to be Lukan, by which I mean it does not seem to come from Luke’s sources, but from his extending the usage from his first volume into his second one. Paul, for instance, never uses the word at all. Furthermore, the term is almost entirely absent from the literature of early Judaism (a few uses in Josephus, and even fewer in Philo, and not really elsewhere). By contrast it’s all over the Gospels. Of the 261 times it is used in the NT, all of them are found in the Gospels and Acts. All of them. And yet the term is not found in the LXX at all. It’s use in the Gospels cannot be attributed to the use of the LXX in the Gospels and Acts, not even in the case of Luke who uses the LXX and this term frequently.

But perhaps the most interesting part of the phenomena of this term is that it is found almost only in the plural in the Synoptics, and mainly in the singular of a particular person in John. Yes the singular form is found in Mt. 10.24,25,42 and Lk. 6.40;14.26,27,33 but in these texts the discussion is of the nature of discipleship as an abstract subject. In the Synoptics then, being a disciple is something you do with a group of people, it is a collective enterprise. We do not hear about Jesus individually discipling a particular person. He calls people as individuals but they are formed into a group— the disciples of Jesus. It may be possible to come up with a taxonomy of circles— the 12 are the inner circle, then there is the wider circle of ‘disciples’ (which includes the 12 of course), and then there are even more ‘followers’ of Jesus. Yes, there are many followers and yes the 12 are called to follow Jesus, but the calling happens to specific individuals, not apparently to all the folks that follow Jesus, and follow him around (often looking for miracles).

But as I have hinted the most interesting bit of this linguistic phenomenon is that in John, apart from John 9.28 where the blind man who has been healed is accused of being Jesus’ disciple and John 19.38 where Joseph is said to be a secret disciple, the term in the singular always refers to exactly one person— the Beloved Disciple, or put the other way around ‘the disciple whom Jesus loved’. I do not think this is in any way an accident. This disciple is first mentioned, and mentioned by name, like the calling of disciples by name in the Synoptics at John 11.1-3. And his name is Lazarus, not John. He is the one who is said to be especially loved by Jesus, and having once introduced the Beloved and the terminology in John 11 (and not before) it continues in one form or another throughout the remaining chapters right to the end of John 21. Yes, ‘disciples’ plural are referred to in some places in John 2, 4.1;8.31-32; 13, and one even hears of how some disciples abandon Jesus after his hard saying about eating his flesh (etc.), but these folks are not named and there is no individual or personal focus on them, unlike the case with the Beloved Disciple. It should be clear as well that the Beloved is clearly not some cipher for disciples in general since the Evangelist is perfectly happy to talk about both ‘disciples’ (plural) and one particular disciple called the Beloved One.

I would argue, and have argued at length in What Have They Done with Jesus? that the reason for this unique use of both beloved and disciple in this Gospel is because he is the eyewitness source of the material in this Gospel. It is his memoirs, as John 21 suggests, memoirs that were later collected and put into Gospel form after the death of the Beloved by a prophet named John (hence the later title that was appended to this Gospel in the early second century). The difference in the usage of the term disciple, almost exclusively in the plural in the Synoptics and in the singular in John is explained by two facts: 1) Jesus historically related to his Galilean followers as a collective group of disciples, and the testimonies we have in the Synoptics ultimately go back to this group of Galilean disciples in one way or another. It is a collective testimony about a collective group of disciples and their relationship with Jesus; 2) this is not the case in John. In John we have an individualistic perspective of one disciple, and not a Galilean one, but rather a Judean one. This is why, for instance, we have no parables and no exorcisms in John, and only one miracle story from the Synoptics recurs in John (the feeding of the five thousand/walking on water tandem). Instead, we have Judean stories like the story of Lazarus, and the man born blind, and the paralytic at the pool, and so on. The Synoptics give is the Galilean story and perspective, John gives us the largely Judean perspective and story, and Jesus operated differently in these two regions. (Note that the singular is found four times in Acts of particular people in Acts 9, 16 and 21, but not of the Beloved Disciple)

In Paul Trebilco’s recent book Self Designations and Group Identity in the New Testament Paul points out that Jesus, uniquely among his peers called people to be his disciples and set a cost of discipleship higher than anything else known in that period so far as a relationship between a teacher and his students is concerned. Jesus demanded adherence, and following him in the case of the Galilean disciples. It does not appear he demanded this of his Judean disciples— Mary, Martha, Lazarus, and others. Think on these things.

November 11, 2012 Self-Designations and Group Identity--- Part One
Browse Our Archives
Related posts from The Bible and Culture