Self-Designations and Group Identity— Part One 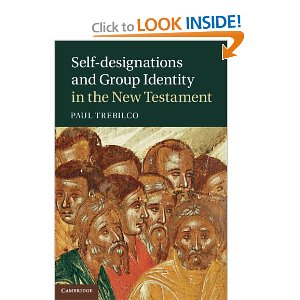 The sociological study on the NT has been going on now for decades, and it has produced some remarkable fruit ever since the landmark study by Wayne Meeks— The First Urban Christians. More recently, one of the most useful and insightful approaches has involved appropriating social identity theory, especially when it comes to group identity. A good example of this is the recently published thesis of Aaron Kuecker on social identity in Luke-Acts. Paul Trebilco’s work has for sometime made contributions to this sort of study of the NT, especially his work on the churches in Ephesus, but now we have a full dress study from his hand on self-designations used by early Christians to demarcate who they were and it definitely warrants a series of posts to analyze this book. A few details first.

The full title of the book is Self-Designations and Group Identity in the New Testament (Cambridge U. Press, 2012, 392 pages, $100 U.S in hardcover). It’s subject matter is chiefly seven of the major labels early Christians used to delineate themselves— 1) brothers and sister; 2) the believers; 3) the saints (hagioi); 4) the assembly (ekklesia); 5) disciples; 6) the Way; 7) Christian (christianos). There are of course other terms used (see e.g. 1 Peter ‘aliens’), but Trebilco has picked some of the more noteworthy and most frequently used labels. The book then has an Introduction and a Conclusion, but all the chapters in between will deal with each of these terms or concepts one by one in the order mentioned above.

It will be in order to talk about methodology at this juncture. While the Introduction does provide us with certain sociological terms used in dealing with group identity labels, or sociolects, such as insider and outsider designations, or ‘inward facing labels’ and outward facing labels’ (i.e. how one talks about one’s group to insiders and to outsiders) or outsider labels for the group (such as Christianoi), on the whole the methodology that is most in evidence on page after page of this study involves: 1) source criticism, 2) redaction criticism, and 3) word studies (frequently using old or dated resources like Kittel). There is no discussion about the limitations of word studies or source and redaction criticism, the methods are simply applied, and it is taken for granted that the reader will know what the consensus of scholars is about such things. In other words, this is a scholarly monograph, with a scholar talking to other seasoned scholars, and it partakes of the limitations and usefulness of the aforementioned methodologies. There is another way as well that this study is decidedly old school in approach— consider for example the discussion of the ‘pistis christou’ debate (p. 12 and elsewhere in the volume).

Certain foundational presuppositions should also be mentioned– namely language is constructed in a community and at the same time constructs the community. The community engages in self-definition, but at the same time comes to conceive of itself on the basis of the labels it uses in self-description. Secondly, sociolects are a form of shorthand that usually assume that the insider audience will be able to fill out the reference. For example ekklesia simply means ‘assembly’ and was used in the Greco-Roman world and in the LXX long before it was used in the NT. Insiders in the Christian community would know which assembly a person like Paul was referring to, and could fill out that he meant ‘the assembly of God in X place…’ or in general. Even a loaded theological phrase like ‘the ‘pistis’ of Christ’ is a form of shorthand, in this case likely referring to the faithfulness of Christ, alluding to Christ’s obedience even unto death on the cross.

It was the Bard who once asked ‘What’s in a word? A rose by any other name would still smell as sweet’ As it turns out, the answer actually is ‘much in every regard’.