The Voice— Yet Another Way to Read Scripture 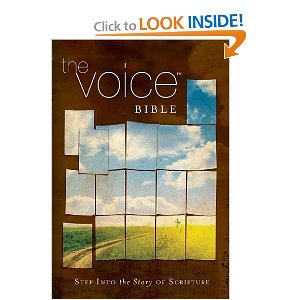 Of the making of Bibles there is no end. But few Bibles have been done in screenplay format, and equally few have been done to emphasis the narratological or story side of the Biblical script in as thorough-going a manner as the Voice. Let me be clear from the outset that this Bible is not just a product of artists and the literarily gifted, though they were certainly involved. The list of Bible scholars involved in the project produces some very well known names—Darrell Bock, Alan Culpepper, Peter Davids, Andy Dearman (my former classmate at Carolina in the early 70s), Tremper Longman and others. Not unexpectedly, it also reflects the touch of gifted writers like Donald Miller.

It is important in evaluating any translation to ask about its aims and its audience as well as its approach. Different Bibles serve different purposes, and reflect different theories of translation. This translation seeks to make the Bible readable as a story by anyone. That in itself is commendable, as ‘scripturese’ puts off a lot of people when they pick up the Bible, especially the unchurched who are about as likely to read a Gideon’s Bible in a hotel room as they are to order out for three year old anchovies or sardines.

The aim of this Bible is not to compete with more literal translations of various ilks. It is intended to make the Bible reader friendly and understandable in a post-Christian era. To the latter end it has notes, and summaries, and one of its more unique features is that it identifies the speaker right in the text itself (say Joshua or Moses or Jesus). There are also synopses or summary explanations or even devotional applications in the text (see for example the one on Rahab on p. 257).

Translations are of course already interpretations of the original languages because decisions have to be made about what words mean in particular contexts. It is the context that usually determines the meaning. With a more paraphrastic translation like the Voice there is indeed more interpretation in the rendering for the sake of intelligibility. The reader has to decide whether he wants a translation that does more of the heavy lifting of interpretation for him or her, or less. If the answer is that a particular reader is unlikely to read commentaries or even detailed notes in the Bible itself, then the Voice is probably a good translation for you.

One of the flash points for any translation is how the divine name or names are rendered. In the Voice’s OT translation you get a lot of ‘the Eternal One’ used and when it comes to Jesus ‘the Anointed One’ shows up a lot. This however obscures the fact that ‘christos’ is used in various places as a virtual name for Jesus (for example in Paul’s letters), and not as a title. Mercifully, in the Gospels the phrase Son of Man has been left alone (which in my view is one of the real big mistakes made in the CEB translation. ‘The Human One’ completely obliterates the literary allusion to Daniel 7 in the phrase).

I have some test passages I always use to see how able a translation is. One of these is the superman verse in Phil. 4.13— which should NOT be rendered ‘I can do all things in him who strengthens me’. Thankfully, the Voice gets it more nearly contextually right— “I can be content in any and every situation through the Anointed One who is my power and strength’. Yes! The issue is not leaping tall buildings in a single bound, the issue is endurance, learning to endure and be content in any and all circumstances.

1 Tim. 2.12 is another good test. In the Voice it is rendered “Now Timothy it is not my habit to allow women to teach in a way that wrenches authority from a man.” This does justice to the context in which Paul is correcting misbehavior by both men and high status women. It makes clear this is a correction of misbehavior, not some apodictic statement that Paul would never allow women to teach men. The verb authentein in corrective contexts does indeed mean ‘usurp authority over’ (or master in a negative sense) rather than ‘exercise authority’ (the meaning in a non-corrective context).

A third example however where I think the translators have failed the test is in their rendering of Heb. 12.2–‘Now stay focused on Jesus who designed and perfected our faith…’ This translation is doubly wrong: 1) there is no ‘our’ in any early Greek text of this verse; 2) the context makes clear that Jesus is being presented as the last and most excellent example of faith and faithfulness in the Hall of Faith which began in Heb. 11. It is Jesus’ example that is being lauded here for us to follow in his footsteps, hence it should reading ‘looking to Jesus, the trailblazer and finisher of faith’ (or even more paraphrastically the example of faith/fulness from A to Z).

One of the difficulties in producing a narratologically driven Bible is of course that the Bible is not simply a bunch of stories. It has other literary genre besides narrative— say Law, or wisdom speech such as proverbs. For this reason I find portions of the Voice like the translation of Leviticus less convincing in this translation as it tends to obscure their literary character.

But having said that, I really like the Voice, far better than say the Living Bible, and perhaps about as much as the Message. I find it has a little less literary polish than say the Message, but it’s certainly a lot more readable than some translations which refuse to use any English above an eight grade level. There are even moments of eloquence in this translation– “What if I speak the most elegant languages of peoples or in the exotic languages of heavenly messengers, but I live without love? Well then, anything I say is like the clanging of brass or the crashing of a cymbal.”

With Bibles, one size never fits all, nor does one translation suit all purposes. But for what it is, and what it intends to accomplish, I am always glad for something like the Voice which does help us get immersed or at least started in the Biblical story and helps us see how his story is not merely history, but the Story through which our stories can be redeemed.

February 8, 2013 The Early Text of the New Testament-- an Important Resource
Browse Our Archives
Related posts from The Bible and Culture