The Early Text of the New Testament– an Important Resource 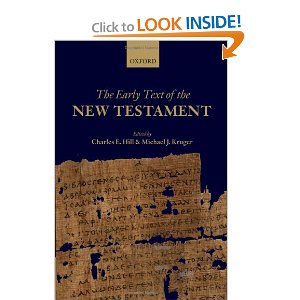 Technical monographs are important, not least because they are usually repositories of detailed information that you can’t very easily get elsewhere, or would have to get from a variety of sources. The new volume just published by Oxford U. Press entitled The Early Text of the New Testament (eds. C.E. Hill and M.J. Krueger, 2012) is such a work. What we have in this important work is a detailed study of the manuscript evidence for all the books of the NT up to and including the period of the great codexes (Vaticanus, Sinaiticus, etc.). The evidence presented is up to date (the authors take into account the latest edition of Nestle-Aland, and recent papyri finds) and generally speaking the assessments of the evidence is fair and balanced. Take for example the chapter by Professor Peter Head of Cambridge on the early text of Mark. He is quite right that Mark is the neglected Gospel, with only one early papyrus (p45) helping us know the state of the text prior to the great codexes. But alas, the evidence of p45 suggests that the scribe who made that copy was happy to paraphrase or give a sense translation, rather than literally copying his source.In other words, the later codexes probably preserve an early state of the Greek text of Mark than does p45. This of course is one of the reasons that the rule ‘the earlier the text, the closer it is likely to be to the original’ is not an infallible rule, and must be used with care. Head goes on to remind us that the so-called long ending of Mark (Mk. 16.9-20) is not represented in the great codexes Vaticanus and Sinaiticus, and nor is it in the Chester Beatty papyrus mentioned, but then the fragment doesn’t get to Mk. 16. In any case, I entirely agree with Head’s judgment that Mk. 16.9-20 reflects traditions and verbage from all three other canonical Gospels, being a pastiche added probably sometime in the second century because somebody thought Mk. 16.8 an inappropriate, or too abrupt ending (a conclusion with which I agree). Head is right to stress that the paucity of evidence for the early text of Mark reflects the fact that it was indeed the least copied, least used Gospel in earliest Christianity, compared to Matthew and John especially which were the most popular ones.

While pp. 81-413 provide us with a series of chapters on the state of the text of all the NT books followed by the citation of said books in other early Christian literature (e.g. the apocryphal Gospels or Barnabas etc.) for me the most helpful portions of the book are found in the first 80 pages where we have excellent essays by Harry Gamble, Larry Hurtado, and Michael Kruger.

Gamble’s essay entitled ‘The Book Trade in the Roman Empire’ reviews briefly the usual evidence for said trade in Rome (see the previous reviews of the works of William Johnson on this blog), and then he goes on to discuss the Christian book trade. He says for example “Christian communities, far from being cultivated literary circles embedded in pre-existing social relationships, were sub-elite voluntary religious associations, and their literature consisted not of belles-lettres but of sub-elite genre–gospels,letters,apocalypses,manuals for church order. hortatory tracts, acts of apostolic figures, and the like. Moreover, as a marginal, largely uncultivated, and indeed counter-cultural minority whose texts had no broad appeal for outsiders Christianity held no interest for the commerical book trade…. Christian texts…were produced and disseminated [by]… private channels among Christian communities.” (p. 32). Even so, as Gamble goes on to point out, there are remarks both about copying and sharing the documents, and also about not altering the documents (see Rev. 22.18-19). Despite all this, Gamble admits that there is clear evidence that these documents were widely disseminated within Christian circles. So for example Clement of Rome, Ignatius of Antioch, and Polycarp of Smyrna all were familiar with various of Paul’s letters in the late first and early second century. Or again, the second century Shepherd of Hermas, which even made some Christian text lists of approved reading, which was created in Rome, not long thereafter was being used in Egypt. Christians got around, and shared their texts. Christians seem to have preferred the codex form of publication due to ease of use. More on this in a minute.

Larry Hurtado’s essay continues his study of the form and function of early Christian manuscripts. While Christians did use scriptio continua (a continuous flow of Greek letters) they also tended to have shorter lines and more spacing between lines to make reading easier, while still getting about the maximum script possible on a page. What is clear enough is that the document was meant to be read out loud, and by a practiced reader who could decipher where the word and sentence breaks were in the text. Later Christian texts did use some punctuation and breathing marks and sigila to help in the process of deciphering the text. As Hurtado says quoting William Johnson “the reader [i.e. the lector reading the document out loud to the group] played the role of the performer, in effect, and the the sort of direction for pause and tone given by the author’s para-linguistic markup in our texts..was left to the reader’s interpretation of the lines. In short ‘A surprising amount of the burden to interpret the text shifted from author to reader.'” (p. 52). This is precisely why Paul chose various of his co-workers to orally deliver his documents to the intended audiences. What distinguished Christian reading circles from the pagan literary elite in Rome was the very social diversity of the hearers— slaves, minors, women, freedmen, freedwomen, the poor, and yes some of considerable means. It surely must have been the latter who fostered the copying of the texts for the community’s use.

Hurtado hypothesizes, perhaps rightly, that the codex form was chosen in part because even literate non-elite persons (e.g. educated slaves) would be expected to read these texts, at least to the other members of their Christian household. Hurtado in fact produces startling evidence of the ubiquity of the codex in Christian circles— of 41 Christian mss. from the second century, 77% are codexes only 23% rolls (which is about the opposite of the case with pagan documents). While Christian documents make up only about 2% of all second century documents, they make up 27% of all the codices and in the third century 38% of all the codices. Hurtado is able to show as well that Christians used the codex for their scriptures, but were o.k. with using rolls for for non-scriptural Christian texts. Further, he points out how Christian documents do not reflect a professional hand, by and large. A fair copy yes, a calligraphic one, not so much. There was much more concern about the content being clear than the form being aesthetically pleasing. The use of abbreviations of sacred names for Jesus and God (the nomina sacra) show as well that these are insider documents, documents not meant for the world in general, but for those within the Christian circles who would know what the abbreviations stood for.

There is much more of this sort of fascinating data in this book, and it is a great pity that you would need to take out a bank loan to buy it (on sale at Amazon, it’s $140 large). Nevertheless, this book is yet further proof that while real education is expensive, ignorance is even more so.

February 7, 2013
The Voice--- Yet Another Way to Read Scripture
Next Post

February 9, 2013 America's Culture of Death
Browse Our Archives
Related posts from The Bible and Culture