Paul and the Heritage of Israel– Part Nine 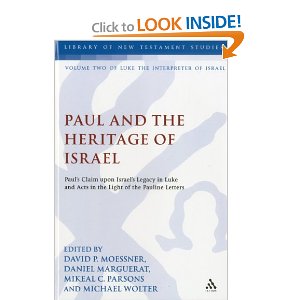 It is a long standing tendency of certain streams of NT scholarship to claim or blame Paul for the way the Jesus movement turned out– namely a largely Gentile religion based not on the teachings of Jesus but on what was later viewed as his soteriological significance and work. This in turn led to a ‘back to Jesus’ and ‘away with Paul’ thrust which we still hear the echoes of today from various members of the Jesus seminar, and most recently from the book by James Tabor Paul and Jesus: How the Apostle Transformed Christianity (Simon and Schuster: 2012), quite properly critiqued by James Dunn in a review in the latest issue (March 2013) of BAR.

The article we are dealing with in this post by Gregory Sterling (found on pp. 220-47 of Paul and the Heritage) deals with this very matter, and at some length and depth. It deserves our close attention. This article was previously test-driven at the SNTS Reception of Paul seminar in 2005 and thereafter revised.

Sterling begins by acknowledging that letters and a narrative like Acts are of different literary genre and therefore deserve different kinds of analyses when it comes to biographical material found in one or the other. This is a good and necessary observation. But in both cases one must take into account the rhetorical shaping and uses being made of the materials. Sterling is also right to note that in Hellenistic historiography such as one finds in Acts there was a regular biographical orientation when it comes to major figures like Jesus or Peter or Paul, and we certainly see that in Acts. Sterling also subscribes to the notion that we have a variety of pseudepigrapha in the Pauline corpus, including Ephesians so that biographical material in such sources fall under the heading of reception of Paul, rather than expression of Paul. We have already noted how Ehrman’s recent treatments of forgery bring this whole line of reasoning into question, from a ethical point of view. Sterling chooses to focus on what Ephesians adds to the discussion of the ‘legacy’ and ‘reception’ of Paul. Sterling also accepts the received wisdom that the author of Ephesians used Colossians in the composition of his document, which I agree with. Ephesians is a circular discourse for various groups and it does draw on Colossians. There is nothing preventing Paul from having done this himself. What Sterling completely fails to take into account is the rhetorical character of Ephesians— namely that it is both Asiatic rhetoric and more particularly epideictic Asiatic rhetoric.

Sterling rightly points out that Ephesians doesn’t mention a co-sender, but rather the focus is entirely on Paul the apostle. This is basically correct though Tychicus is clearly said to be with Paul and his go between to the audience in Ephes. 6.21-22. Sterling points out of course that in Acts Paul is only in Acts 14 called an apostle, whereas this is emphasized in Paul’s letters, including Ephesians. The problem with citing the parallel use of apostle (to mean emissary of a particular church– 2 Cor. 8.23) is that elsewhere in Luke-Acts Sterling takes the reference to apostles to be a terminus technicus. Sterling settles for the idea that Luke was inconsistent in his use of the term. The problem with all this is the basic assumption that ‘apostle’ is a technical term in the first place meaning something like: 1) a member of the 12; 2) one of the original eyewitnesses of the ministry of Jesus. But what if it simply means an agent of Jesus, an emissary sent by Jesus? Paul believes that what makes him such an agent is: 1) the resurrection of Jesus, and 2) his having seen and been commissioned by the risen Lord. In Acts, the commission is for him to testify to Gentiles, Kings, and the children of Israel. In short, I think the discussions of the term ‘apostoloi’ have been overly problematized.

On the basis of Ephes.3.3-6 Sterling attempts to claim that the revelation of the mystery (of Gentile salvation) came to Paul before it came to the other apostles and prophets. In other words “his argument is that Paul has pride of place in the revelation of God’s mystery.” (p. 235). Of course the problem with this is that Ephesians is based on Colossians, and it would be hard to argue that Ephesians is intended as a correction of Colossians, not to mention a correction of Acts, where Paul and Peter both get revelations about the mystery (Acts 9-10) in close sequence (though Paul comes first). Sterling argues that Luke is basically doing the same thing Ephesians is, namely focusing on Paul as the pre-eminent apostle to the Gentiles by placing his conversion first. Thus, he is not sublimated to the Jerusalem authorities— whether the 12 or later James etc.

Sterling goes on to argue that Luke presents Jesus as the founder of Christianity, and then the 12/apostles, and then Paul as his successors. In fact he says Luke’s view is that while Jesus is the founder, Paul is the architect and builder of early Christianity (pp. 239-40– appealing to Irenaeus’ evaluation of Acts in ad. haer. 3.15.1). But this is probably to view Acts too much through a biographical lens. Luke is a historian recounting the signal events in a historical progression. His primary interest is in how the good news about Jesus gets from Jerusalem through the Empire to Rome, it’s center. This is why we do not have resolution of Paul’s fate in Acts. Luke believes it is God and the Spirit who is the prime agent of the spread of the Gospel, not Paul. Indeed, the book of Acts might be best called the Acts of the Holy Spirit (not the apostles, including Paul). Sterling also makes the mistake of assuming Galatians could not be an early Pauline letter written before the Acts 15 council. The matter is not even argued or discussed, it is just assumed, and this leads to the further assumption that Acts relates many more journeys of Paul to Jerusalem than Paul does. That is in fact not really correct. The ultimate journey to Jerusalem is alluded to in Rom. 15, but is still in the future, whereas Acts relates it as a past event with consequences. In other words, Sterling doesn’t synch up the accounts in Acts and the letters very well. Another example of this (see p. 243) comes when he tries to argue that Ephesians and Acts both suggested that while the life of Paul is over, the voice and message of Paul carries on into the next generation. This works for Acts, but not for Ephesians, where Paul is still sending emissaries to churches, like Tychicus. In the end, Sterling endorses the notion that Ephesians is the quintessence of Paulinism, a sort of summary of his thought from a later period. The reader has access not merely to Paul’s thought but the man himself through his letters, even this one thought to be written after his death. According to Sterling, in Ephesians, Paul goes from being the apostle to the Gentiles, to being the apostle to all the churches, and he argues that the letter reflects the later situation when the church is largely Gentile and the Jew-Gentile controversy that wracked the early period of the church was well and truly over (p. 244). So it is that while there are clear agreements between Acts and Ephesians, the former emphasizes his career, the latter his thought, according to Sterling, but they both agree he is the pre-eminent apostle of any sort, especially to the Gentiles, who turn out to be the dominant church population by the time Luke is writing. 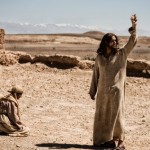