The Problem with Preaching– Part Two

In my last post, I pointed out that preaching seems to be somewhat missing in action within the context of early church meetings in homes, and elsewhere. Of course there is nothing in these NT texts that says or suggests there is anything wrong with preaching in such worship contexts. Far from it. And in an age of increasing Biblical illiteracy it’s frankly irresponsible to think that we would be fine without good preaching in the church. We wouldn’t, and we aren’t, and I say ‘we aren’t’ because much of what passes for good preaching is not good preaching.

It may be good entertainment, it may be attractively packaged with lots of video clips, powerpoints etc. but the real question is— ‘Is God’s Word being faithfully, accurately, truthfully, powerfully expounded in ways that convict, convince, and even convert persons in the congregation?’ If what you are getting instead is Chicken Soup for the soul, or Stand Up Comedy, or just a good buzz, you have not been well served by your preacher.

Unfortunately,the Catholic and Orthodoxy model which offers ‘the sacrifice of the mass’ or the ‘divine liturgy’ (left almost entirely in the hands of a class of priests), is not a NT model of ministry or worship either. Usually, in such services if any exposition of God’s Word shows up at all, it is a homilette, not even a full homily. Bible lite– less filling, tastes great.

The problem is only exacerbated if only a tiny minority of the church is involved in things like :1) in depth Bible study in groups (not just alone); and 2) in Sunday school classes where there are good teachers. Everything can not be front-loaded into worship. There have to be other times and places where the Word of God is opened up and applied to our lives.

It’s no good giving people an exhilarating experience and buzz in worship if there is little or no Biblical substance to chew on thereafter, little or no sound exposition of God’s word. Without Biblical and theological literacy you have no means to properly interpret your worship experiences, say, being able to tell the difference between a heart-warming experience and heart burn!

The NT knows no priesthood except the High Priesthood of Christ, and the priesthood of all believers. It has no time for a class of priests or clergy, not least because we should not be worshipping according to the Gospel of Leviticus.

Ministers are not priests, the Lord’s Supper is not a sacrifice, the church is not a Temple, Sunday is not the sabbath, Christians are called to sacrificial giving not tithing, and I could go on. All of that revisioning of New Testament practices in the light of the OT practices ignores how radical Jesus and the early Christians were when it came to worship, sacraments etc. As Jesus says, ‘the day is coming and now is’ when true worship has to do with worship in Spirit and in truth, not to do with Temple-centered worship, whether on Gerizim or Zion.

It has to do with sacred persons, sacred times, not sacred spaces and zones and clergy. It has to do with all of us being caught up in love and wonder and praise of God, all of us presenting ourselves (not presenting Christ) as living sacrifices. Lest however, you think I have become a Quaker or a radical Pentecostal, let me add that it does also have to do with leaders as well as followers, shepherds as well as sheep, preachers as well as listeners. The church needs, and the NT urges particular models of leadership, including leadership in proclamation, exhortation, evangelization, edification and so on. And this brings us back to preachers. What does good preaching look like? In my next post, I will talk about that. Meantime, you might want to pick up and read my book We Have Seen his Glory about a Kingdom or eschatological perspective on proper worship. 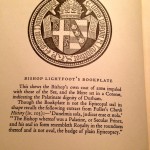 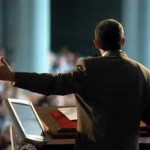 September 28, 2013 The Problem with Preaching-- Part Three
Browse Our Archives
get the latest from
The Bible and Culture
Sign up for our newsletter
POPULAR AT PATHEOS Evangelical
1

Four Tips for Reading the Book...
Crux Sola: Formed by Scripture to Live like Christ
Books by This Author Books by Ben Witherington

Evangelical
Matthew M. on Giving Your Children Biblical Names---...
The Bible and Culture

The Forgotten Woman Who Jesus Said to Remember
The following article is an excerpt from Jesus: A Theography (Leonard Sweet...
view all Evangelical blogs
Copyright 2008-2021, Patheos. All rights reserved.