The ‘Gravity’ of the Situation

The ‘Gravity’ of the Situation October 10, 2013 Ben Witherington

Make no mistake, ‘Gravity’ is one of the most visually stunning movies to have ever been made (especially in Real 3-D), and one of the most sophisticated ones made in the CG era. And as space movies go, this one certainly wins the prize for seeming to be real, and putting you right on out there in 0 gravity with George Clooney and Sandra Bullock. Granted there are better places to meet them than out there in a bulky space suit, but still, it’s fun.

At an hour and thirty one minutes, there is also absolutely no filler in this film. And at many junctures it keeps you on the edge of your seat. My one major complaint is there is not enough back story, and character development, but then you can’t have everything. The problem of course with a physical action thriller is there are not many lines, precious few memorable ones. The story is tight, and the characters are tight-lipped for a good deal of the storyline. In fact, there really is only one actor for the whole film, and that is Sandra Bullock— and she is excellent in this film, really terrific. George Clooney by comparison plays just a supporting role, and really he just plays himself– the avuncular chatty male hunk self.

The basic premise of this movie is– Can one survive a disaster in space? This premise is played out as a sort of survival of the fittest tale, a tale of human courage when one is basically on one’s own and having to be creative enough to give oneself a chance of survival. At one juncture Commander Ryan Stone (yes that’s the name of Bullock’s character) thinks she will die and says she wished someone had taught her to pray. The movie, if not godless, is just about faithless, that is until near the end… when a prayer of thanks emerges involuntarily after a wild ride.

To be honest, this film settled the issue for me as a child who grew up in the space era and heard Kennedy’s announcement that we were going to the moon. I have concluded I have no desire to go to outer space or the moon. Even if I got to be marooned with Sandra Bullock for a while. I’m just saying. It may be beautiful out there, but it is cold and foreboding and dangerous…. and it lacks gravity. Without gravity, you are in grave danger and in danger of the grave. I’ll settle for seeing the satellite pictures…. and a great movie like this. 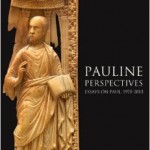 October 11, 2013 N.T Wright's Pauline Perspectives-- Part One
Browse Our Archives
get the latest updates from
The Bible and Culture
and the Patheos
Evangelical
Channel
POPULAR AT PATHEOS Evangelical
1