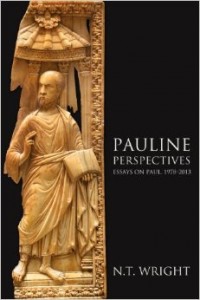 My friend and colleague Tom Wright now has two new big books on Paul coming out, the first is a collection of his many essays on Paul over the last 35 years (640 pages, out with SPCK first) and the second is his magnum opus on Paul (which we will deal with in due course). Since these essays are mostly all previously published, I thought it would be helpful to do a dialogue with Tom on some of their major themes and trajectories in a several part series. Here is his response to my first question–

Ben: A very long time ago (B.C. in fact— before computer! 1978), I met you for the first time in Cambridge, at a Tyndale House session. You were presenting a paper on St. Paul and the Law. It seems like this is a subject that has fascinated and stimulated you throughout your career, and now your new Pauline Perspectives volume sort of proves this point. Why has this been a theme that you have returned to over and over again? What about it do you find so significant when it comes to the thought world of early Christianity?

Tom: From my earliest puzzling over Paul, at undergraduate level, I was struck by the vehemence with which some expositors took the line that ‘Christ is the END of the law’, meaning with that to sweep away not only the Old Testament but also all effective Christian moral reasoning. That isn’t an exaggeration; I recall one guest speaker at my seminar, challenged about his moral relativism on the basis of the Ten Commandments, replying, ‘Ah, but since then Christ has come, and Christ is the end of the law’. More recently, a senior NT scholar responded to my proposal that for Paul the unity and holiness of the church was central by suggesting that to emphasise ‘holiness’ was to fly in the face of Paul’s rejection of the law. From the first time I met this kind of thing I knew in my bones it wouldn’t do, exegetically or theologically never mind pastorally — and remember that all my adult life I have been involved in various kinds of pastoral work.

But if that was how I ‘got in’ to the whole area, it quickly became fascinating in and of itself. I soon discovered, through studying the Reformers as part of my degree, that there was a major cleavage here between Luther and Calvin, and it was clear to me that Calvin gave the far more theologically robust account of the law. Equally, the best Calvinist expositors — I’m thinking of Charles Cranfield, for instance — couldn’t give a (to me) satisfactory account of Galatians. The whole thing needed reframing. At the intellectual level, it was like a crossword puzzle or a Su Doku that just wouldn’t come out right and I realised that there were some fundamental mistakes underlying all the problems. This was one of the contributory causes of my going back in much more depth to the second-temple Jewish background, and my attempt to reframe all the questions in real-time first-century issues has, I believe, basically solved the problem, though of course Paul’s writing is often so telegraphic and compressed that all expositors have to ‘fill in the blanks’ where he leaps over things he takes for granted, and so there will always be room for debate . . . But what’s going on in ‘Paul and the Law’, obviously, is a major point of tension and transition within the world of ancient Judaism, precipitated by the death and resurrection of Jesus, and for that reason it is one of the classic challenges to anyone trying to give an account of that explosive moment — as well as containing vital elements for both evangelistic and pastoral strategy and practice… 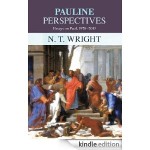 Evangelical
Impressions of the Impressionists-- Part Three
The Bible and Culture

Hymn of the Day: Lord, Speak to Me...
https://www.youtube.com/watch?v=0nAeVBQIp6w Lord, speak to me, that I may speak In living echoes...
view all Evangelical blogs