Blomberg’s Can We Still Believe the Bible?–Part Eight 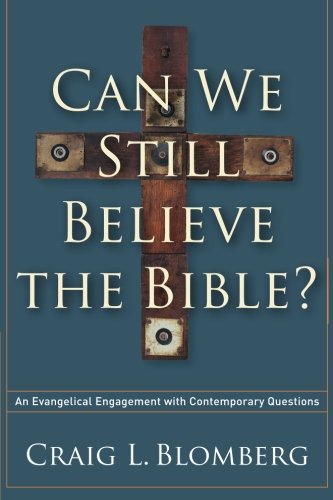 The last main chapter in Craig’s book deals with the subject of miracles, both ancient and modern. Craig relies not only on the various analyses of the Biblical miracles available in scholarly works, but also the recent large compilation of modern testimonies about miracles compiled by my Asbury colleague, Craig Keener. To this Craig adds some personal testimonies about miracles in his own life, or that of his close family. While reading this chapter I remembered a conversation I once had with Bart Ehrman about miracles in which he said to me ‘miracles don’t happen because they can’t happen’. How exactly he could be so omniscient to know that miracles couldn’t possibly happen is a mystery to me, and such a dogmatic statement from an agnostic seemed equally improbable. This is especially the case when there are millions of testimonies to miracles happening, some of them verifiable and even verified by doctors, even now. What that conversation with Ehrman reminded me of is that faulty presuppositions about what can or can’t happen are often the real impediments to believing in a religion full of miracles like Christianity.

Craig reminds us at the outset that miracles by definition, as one off events, precisely because they cannot be duplicated exactly under laboratory conditions and so lie outside the bounds of the kind of scrutiny empirical science can give such phenomena. (p. 179). This is correct and reminds us that there are plenty of realities in this world that are not duplicatable under laboratory conditions. Real is one thing, scientifically verifiable is another, which is a much smaller category of reality. For example, one cannot prove that person X loves person Y doing scientific tests in a lab on the two persons. Love is not quantifiable in terms of size, shape, color, smell, taste etc. Empirical reality is only a part of reality. We could say the same thing about pain. While science can study the causes of pain, and can tell us nerve endings are the sensors that detect or make possible pain, you cannot open up a person and find pain. It can’t be seen, smelled, touched, tasted as it is not a material thing and so it can’t be tested. Craig also makes the point that miracles, since by definition they are extraordinary events that take place randomly rather than regularly or periodicially, can’t be predicted either using probability models. I would tend to agree that they transcend the normal causal mechanisms in nature, but don’t contravene them. As such, they are inexplicable in simply medical or empirical terms.

On p. 181, Craig makes the interesting point that no other founders of world religions outside of the Judaeo-Christian tradition have miracles attributed to their founders in their earliest foundational documents. Not Mohammed, not Buddha etc. There are such claims in Hinduism, but it is the only other major religion in which miracles are regularly claimed, and it should be noted that miracles continue to be claimed in Christianity today, but I know of no such parallel claims coming out of modern Judaism, but there may be some.

One of the usual comparisons made to Jesus from antiquity is of course the stories about Apollonius of Tyana, which Craig deals with on pp. 187ff. He is right that the biography of the man comes from the third century A.D. and there is something of a parallel in that biography to the raising of Jairus’ daughter. This story is too late to have influenced the Gospel tradition (though Apollonius was a first century resident in Capadoccia) in the first century, but the influence could well have gone the other way, since Christianity was a religion on the rise in the 2nd and 3rd centuries. Craig reminds us that “nowhere in any ancient mythology or folklore do we ever find even the claim that an indisputably human individual who died within the living memory of others was raised bodily” (p. 186), apart that is from the Apollonius story just mentioned. And the claim that there were many such Greco-Roman miracle works is not validated by the scrutiny of the sources (p. 190). The NT miracles in any case are closest to various OT ones, as Craig stresses, except for the exorcisms.

On p. 188-89 Craig deals with the supposed parallels with Mithraism but that was a male only cult, indeed it was a soldiers cult supported by the imperial authorities, and the parallels with the celebration of a deity on Dec. 25th do not even exist before Christians began to do that in the third century A.D. Furthermore, the claim that there is a virgin birth story that’s part of Mithraism is false— there is a story of a bull-slaying god springing forth from a rock, which hardly parallels a virginal conception! Craig also deals with the Horus/Osiris/Isis supposed parallels with the early Christian stories about Jesus resurrection. It was never claimed in these stories that Horus was crucified and resurrected. Nowhere. Horus was a falcon born by Isis after she had sex with her dismembered and dead and then reassembled husband Osiris.

What were the function of miracles in the NT, besides being acts of compassion. They were meant to indicate that God was doing a new thing, the divine eschatological saving reign of God was breaking into history and with this the divine savior. The miracles in acts differ in that they are done on the basis of Jesus’ name and his power. Jesus himself however has the inherent power to do them.

Craig’s conclusion chapter is carefully based on the evidence and arguments of the previous chapters and provide a summary of the six major points that he has been making throughout. This is a fine book, by a mature and experienced scholar, and my hope would be it gets a wide hearing and use.

October 29, 2014
Sir Paul surpasses All-- The Louisville Concert
Next Post

October 31, 2014 Scary Papyri I-- I want my Mummy
Browse Our Archives
Related posts from The Bible and Culture