Can You Dig It?— Part One 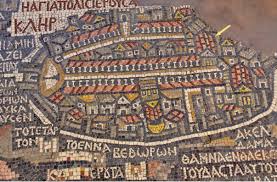 There are of course some archaeological sites that are ‘no doubters’, for example the site of the Temple Mount in Jerusalem. But it’s a whole different story when it comes to excavating tiny Galilean villages near the sea of Galilee. Recently, we have been told that the ancient Roman city of Julia has been found which is said to be the successor on the same site to the Biblical city of Bethsaida, home to Peter and Andrew, and perhaps other members of the Twelve. Here for example is a story about this site—–http://www.foxnews.com/science/2017/08/07/lost-roman-city-that-was-home-to-jesus-apostles-found-say-archaeologists.html

The problem is, another city has already been excavated and identified as Biblical Bethsaida, through the careful work of Rami Arav. See his site here—–https://www.unomaha.edu/international-studies-and-programs/bethsaida/about-us/index.php

Both of these archaeologists and their claims cannot be right. So how does one decide? Neither site has a ‘Peter slept here’ inscription of any sort. Et Tel, the site excavated by Arav, has the virtue of being nearer to other sites we know Peter and Andrew were associated with, for example it is not far from either Capernaum (home of Peter’s mother in law) or Migdal (home of the famous disciple Mary=Miryam). The site el Araj is further away from these other Biblical sites, but is possible. See further—-
http://www.biblearchaeology.org/post/2012/09/14/Text-and-Tell-The-Excavations-at-Bethsaida.aspx
– http://www.biblearchaeology.org/post/2007/08/15/Three-Woes!.aspx
– http://www.bibleplaces.com/bethsaida/

One clue is that Josephus says that Herod Philip expanded the village of Bethsaida to make it into the Roman town of Julias. To give you an idea of the difference in location Netours has created a couple of maps, we produce them here, courtesy of Netours. 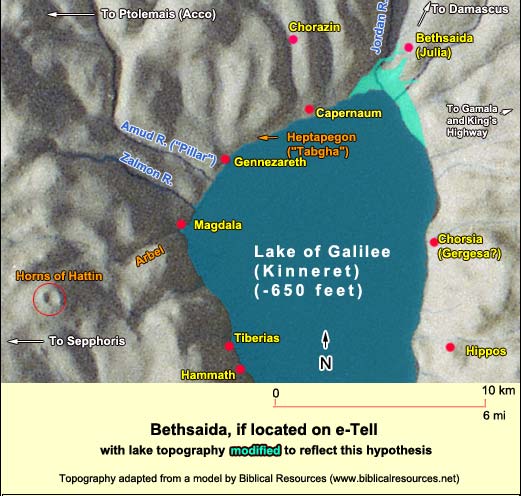 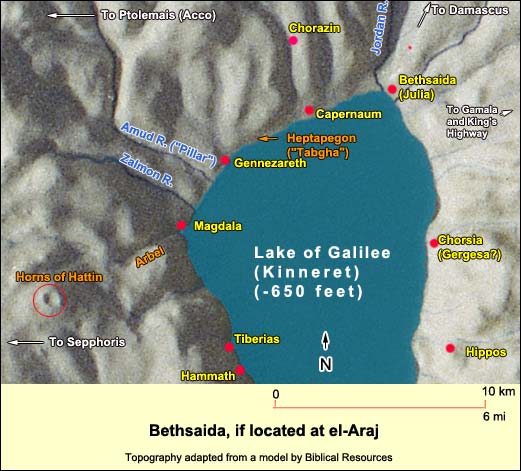 Scholars have wondered whether Bethsaida at et Tell makes sense because it is well up on a hill. Much depends on the level of the sea of Galilee in that era. On the other hand el Araj, as the map shows is a bit closer to the lake (possibly). The height of the tel however can’t be a deciding factor, not least because a large fisherman’s house has indeed been found at et Tel, showing that it must have been near enough to the water for that to be the occupation of some of its residents.

There is however the fifth century remains of a Byzantine church at el Araj, and some coins, even first century coins have been found there. There is however yet one more problem with el Araj being Biblical Bethsaida— namely it was within the territory of Herod Philip, not in Galilee. Peter is clearly enough identified as a Galilean in the Gospels, not, say, an Iturean. Herod Philip’s territory did not include Galilee.

I bring all this up to make clear that archaeological evidence is often ambiguous, and not definitive and equally competent archaeologists can come to differing conclusions, unless of course one finds a smoking gun kind of evidence. Thus far, such evidence is lacking at these digs.

March 10, 2018 Writer's Reckoning
Browse Our Archives
get the latest from
The Bible and Culture
Sign up for our newsletter
POPULAR AT PATHEOS Evangelical
1