‘Tombland’— Where Readers Go to Die 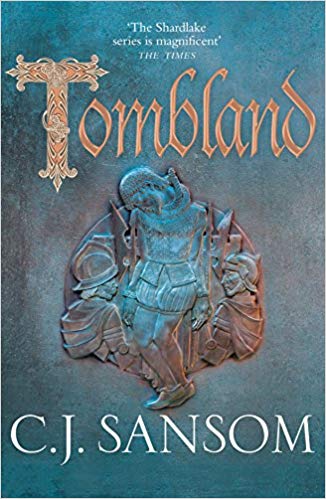 C.J. Sansom is an an accomplished historical novelist, and his latest volume has been nominated for the Sir Walter Scott Prize. It might be better dubbed ‘Tomeland’ as it is a whopping 854 pages long. No quick Ellis Peters or Paulm Doherty medieval read this volume! The volume came out in the States in January of this year, and I have been reading and reading it for weeks. It recounts the events of 1549 in England, specifically the abolition of the Latin Mass coupled with the emergence of worship entirely in English. This event, plus social upheaval caused by the wealthy ‘enclosing’ common land previously used by the poor and working class to grow crops and raise animals led to various uprising and rebellions throughout the South and Midlands portions of England, the largest of which transpired in the late summer of 1549 in Norwich. The title of the book comes from an area in the center of Norwich, and recounts especially the actions of Robert Kett and his organization of the local rebellion which involved an actual pitched battle between the forces of the Crown and the ‘gentlemen’ and some 6,000 or more peasants, yeomen, ex-soldiers who had deserted from the war with the Scots, and others.

As usual Matthew Shardlake, lawyer supreme is in the middle and the mix of things, doing an investigation of a murder in Norwich of a relative of young Lady Elizabeth (later to be queen) in whose employ Shardlake found himself. The story also involves Barak, Matthew’s familiar partner in adventure as well as a wide range of interesting characters with intriguing names (like Mousy Brown, Goodwife Everneke, Sooty Scambler, and Leonard Witherington— ye gads, one of my ancestors no doubt). This is the seventh volume in this running series and is rightly often compared to the Hugh Corbett series of historical novels by the incredibly prolific Paul Doherty, though that series focuses on the 13th century, not the 16th and the novels are much shorter, rather like the even earlier beloved Brother Cadfael novels of Ellis Peter (a.k.a. Edith Pargeter).

Tombland has many twists and turns and interesting plot developments, and the murder investigation does not come to a conclusion until over 700 pages into the story, and is to some degree overshadowed by the larger plot focusing on Kett’s rebellion. Once again Sansom has done his homework well, and his analysis of the historical vagaries seems on point, and is further justified by a 50 page essay at the end of the novel showing some of his historical research complete with works cited in endnotes.

For me, less would have been more when it comes to this novel, as it drags a good deal in places in the first 500 pages of the story, but nonetheless it retains your interest. The reader wanting to get a sense of Sansom at his best in less pages should try Dark Fire (also reviewed earlier on this blog). The Tudor period of Henry VIII which precedes the time of this novel is inherently more interesting than the short-lived reign of the boy King Edward.

May 20, 2019 It's About Time--- Digitizing the Mt. Sinai Library
Browse Our Archives
Follow Us!