The Third Sunday of Advent 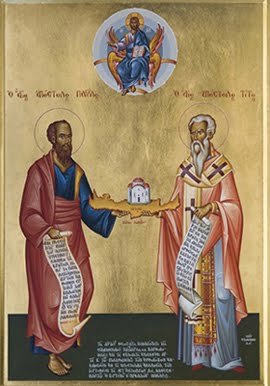 Above, Paul and Titus and the Church in Crete. Paul never really talked about the birth of Jesus much, though Paul mentions he was born of woman, born under the Mosaic Law (Gal. 4.4) and that he was of Davidic descent (Rom. 1.3).   Clearly, as Phil. 2.5-11 would show he is more concerned with the significance of the incarnation of Christ as a human and yet divine person than about the particulars in regard to how and where he came into this world. If Luke was indeed his sometime companion, he will have known some birth stories about Jesus, but chose to focus elsewhere.

But the focus of this third Sunday of Advent should be on Mary and her virginal conception and giving birth to Jesus. I have written a poem about the larger significance of this.

Ate from the apple
Shared it with him
Disobeyed the order
Indulged the whim.

What was the outcome?
The fruit of the act?
She ‘knew’ good and evil?
She experienced it in fact?

Did the earth creature join her?
Did he crumble into dust?
Did he die in an instant?
Or just tumble into lust?

To love and to cherish
Becomes ‘desire and dominate’
Objectify the ‘other’
So you can subjugate.

Suddenly self conscious
Instantly aware
There are no coverings
Only nakedness there.

Hiding in the garden,
The creature in shame
Running from her Maker
Like some kind of game.

Passing the blame on
From God to the wife,
From the wife to the snake
‘The’ creator of strife.

Banished from the garden,
But clothed by their God
Not allowed to live forever
Find a living from the sod

And would she be able
To raise Cain at all?
Or will her next offspring
Be first to fall?

And how to redeem this?
Set the process in reverse
Put a stop to the death toll
Undoing the curse?

From the very beginning
The burden was clear
“Be it unto me as you said,
The Lord’s servant is here.”

A virginal conception
Had a child without a man
Which no one expected
And few would understand.

She received a word of warning
A sword would pierce her soul
But the death of her first born
Would make the race whole.

There beneath a crooked tree
Stood that woman and a man
Neither disobeyed the orders
Each accepting the plan.

Then He rose in the garden
Reopened its gate
To the tree for the living
To the Adam without mate.

And there in the Scriptures
Was a promise true and sure
“She’ll be saved through the childbearing”
That Mary did endure.