A Comedy of Terrors– Another Flavia Albia Mystery 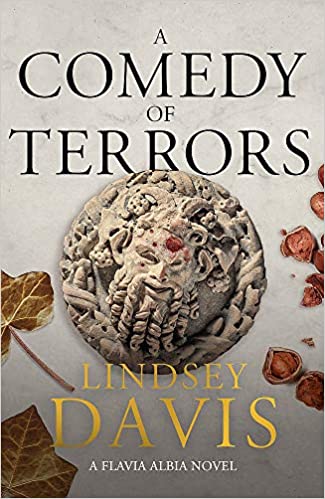 We are now nine novels into the spinoff series from the very popular Falco series, only in these novels the detective in question is the adopted daughter of Falco and Helena Justina, found as a street child in Britain, Flavia Albia.  The series started out a little too stridently with Flavia sounding like a mad-at-the-world modern feminist, but predictably, Lindsey Davis, who is a great writer found her groove, and the series has been percolating along quite nicely ever since.  One of the things that makes Davis’ novels so enjoyable is her wry wit, with some scenarios bordering on hilarious in all these novels.  This sets her work apart from other major novelists who write about this period.  These novels are just more fun, but still full of excellent historical data and insights.

As for Saturnalia, here’s how Wikipedia sums things up:

“Saturnalia is an ancient Roman festival and holiday in honour of the god Saturn, held on 17 December of the Julian calendar and later expanded with festivities through to 23 December. The holiday was celebrated with a sacrifice at the Temple of Saturn, in the Roman Forum, and a public banquet, followed by private gift-giving, continual partying, and a carnival atmosphere that overturned Roman social norms: gambling was permitted, and masters provided table service for their slaves as it was seen as a time of liberty for both slaves and freedmen alike.[1] A common custom was the election of a “King of the Saturnalia”, who would give orders to people, which were to be followed and preside over the merrymaking. The gifts exchanged were usually gag gifts or small figurines made of wax or pottery known as sigillaria. The poet Catullus called it “the best of days”.

This particular novel starts very slowly. Flavia has no case, and anyway the holiday revelry is about to begin. Her husband Tiberius Manlius the tribune however is very busy. On the surface it appears he is dealing with the nut wars, between sellers of nuts vying for a corner on the market.  Beneath the surface however lurks organized crime, actual mob gangs, with dark clouds on the horizon of truly bad things about to go down and what could the poor vigiles or even a tribune do about it.  FYI the vigiles were a sort of combo fire department and law enforcement group.

The real strengths of these novels including is one are: 1) the insight into the messiness of domestic and public life in ancient Rome; 2) the wittiness of the dialogue and various story lines; 3) and Davis’ unrivaled ability to build a story, create suspense, and still have a total surprise by the end of the tale, saving the reveal to the very end.   I love the exploration of the life of a somewhat ordinary family where there is plenty of stress, but also plenty of familial love.  Let’s hope there will be many more volumes in this series that rightly feature the roles women often played in society, roles that tended not to make the history books later written by men focusing on men’s roles.

January 7, 2022
My Top Ten (Mostly) Instrumental Jazz LPs of All Time
Next Post

January 9, 2022 Podcast on Voices and Views on Paul
Browse Our Archives
get the latest updates from
The Bible and Culture
and the Patheos
Evangelical
Channel
POPULAR AT PATHEOS Evangelical
1