The Bible is neither mysterious nor straightforward in how we have come to read it. Human hands have both copied, miscopied, rewrote, preserved and reconstructed its many pages of ancient inspiration to the present day.

For many practicing Christians around the world, the Bible’s origins are an unanswered, let alone unasked question. Without realizing it, many simply have come to assume certain ideas about their sacred text based on nothing but their own speculation. They imagine images of Paul, Wycliffe and Luther, creating a seamless thread linking the original inspired author to the printed pages held in their hands.

The truth is though, that the Bible was not dropped out of the sky as if by magic. It was copied, edited and changed by the human hands that read and re-wrote it. Moreover, the plethora of modern translations available today are the result of careful reconstruction on the part of trained scholars.

Someone need only turn to examine one of the Christian faith’s most prolific writers, Paul of Tarsus, to see an example of this. When the apostle first wrote his letter to the small community of house churches in Corinth, it could only be sent to one of them. The only way another church could read that said letter was if someone in the community had the ability to write and could make a copy of it to give to them.

Unfortunately, as Eldon Jay Epp, a prominent textual critic points out, literacy rates at this time were exceptionally low. This was especially true for the Christian community who attracted converts from the three most illiterate and uneducated groups of the Roman Empire: women, children and slaves. Such handwritten copies were, as to be expected, of variable quality and could often be expected to contain many mistakes.[i]

This was also due to the fact that Christians did not view Paul’s letters initially as scripture.[ii] It wasn’t until the second century that Christians began to see within these works what they perceived to be the handprint of the Holy Spirit.

Even then though, the copies they made were sometimes sloppy because these early Christian scribes were more interested in quantity than quality, as they held to a belief that the world would end within their lifetimes.[iii]

Another famous textual critic, Bart Ehrman, points out that there were three types of mistakes or changes that these scribes might make while creating a new copy. These would include:

There existed a number of reasons why scribes might have chosen to alter or change the text from what they originally received. Sometimes they had simple miss-sights of the eye that allowed them to skip sentences or verses by accident while at other times these changes were due to theological motives, such as a disagreement with the text being copied. If a scribe did not believe that Jesus was a carpenter, then that said scribe might choose to remove such a reference from the text he was copying.[iv]

As a result, modern translations of the Bible are created not simply for the purpose of improvements in the English used to convey the meaning of ancient Greek words, but to decide what passages even belong in the New Testament and whether any need to be added or removed.[v] This can be clearly witnessed by the fact that some Bible translations do not include verses that other translations do.

For instance, many passages that are included as part of the King James Bible are no longer included in new translations, such as 1 John 5:7-8. Other passages, such as the last few verses of the Gospel of Mark and John’s story of the woman caught in adultery may also eventually be removed from future translations or added as appendixes due to the work of textual scholars.[vi]

In conclusion, the Bible has had a complicated path to journey, from the archaic poetry of Ancient Israel to the Hebrew scroll of Chronicles, and from the pen of Paul in Greek to the leather book at home in English. It is neither mysterious nor straightforward in how we have come to read it. Human hands have both copied, miscopied, rewrote, preserved and reconstructed its many pages of ancient inspiration to the present day.

It is, like all books, a story in its own right. 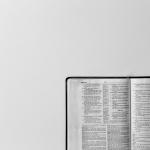 October 7, 2018
When the Bible Rejects Its Own Stories
Next Post