Baby Yoda and the Biblical Canon

Unless you’ve been living under a rock for the last year or so, or simply don’t use social media, you’ve probably been made aware of the social media phenomena known as “Baby Yoda.”

I was actually first introduced to it during the release of my new book, Saying No to God: A Radical Approach to Reading the Bible Faithfully.

Everywhere you turn online there seems to be images of this adorable and anime-esque alien creature. The Star Wars character is from the new Disney+ TV show The Mandalorian, which became the world’s most watched television show last November and December.

And yet, the story of this phenomenon isn’t as simple as a TV show. Because, although the character is seemingly in every place that you look, almost everything one sees about it is not “true,” so to speak. Or to use a word that is common to both Star Wars and Religion, they aren’t “canon.”

While the television show represents the official version of the character’s known details, most of what people recognize or think about the character does not relate to the show at all. Confused? As a much older character named Yoda once said: “You should be.”

For one thing, “Baby Yoda” is not actually the name of the character. Officially, his name hasn’t been revealed. For the time being, Disney officially refers to him simply as “The Child.”

And yet, perhaps strangely, most fans know him by his “apocryphal” name.

When the character was first revealed in the show during the second episode, audiences lacked a name for it and so began to refer to it widely by a name they themselves collectively imagined.

This is important, because although Disney has tried desperately to make the official name “The Child” just as popular (putting it on all of their merchandise), most fans still prefer and retain use of the apocryphal name, even if they utilize the official one at times too.

All the more interesting is the admission of Disney that the character will not always be referred to as “The Child.”

This is because the mysterious character actually has a real name, known to some at Disney, which will eventually be revealed to audiences.

This means that even the official name is almost as apocryphal as the fan-made one, a placeholder for the true identity.

MEMES AND THE APOCRYPHA

Yet, the name known to most is not the only divergence from the canon.

Despite the popularity of the show, most people are likely to know about Baby Yoda based off storylines, quotes, and ideas that are entirely foreign to the show. In other words, they are utterly apocryphal.

Most of these are delivered in the form of memes which consist of a picture(s) of Baby Yoda and dialogue. Some memes are more popular than others, and one remains the most popular of any: “Chiccky Nuggies.”

Like most widespread traditions that evolve, it’s hard to pinpoint which meme actually started the idea. However, this was the first meme I ever encountered with it: 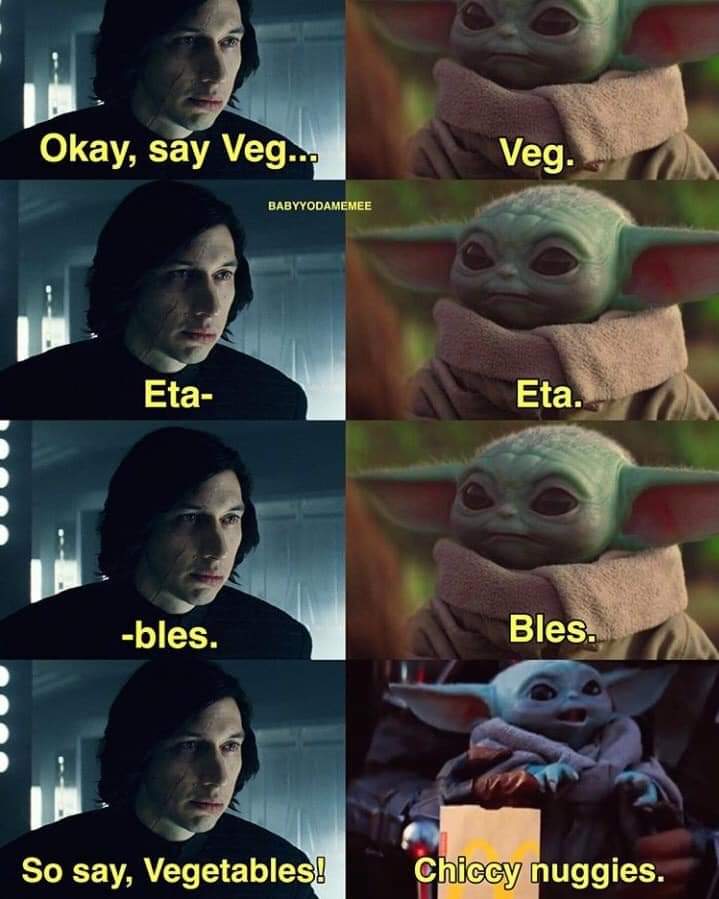 Countless other memes exist which feature the character enthusiastically endorsing “Chiccy Nuggies.” So widespread has this idea become that it has crossed mediums.

There now exist videos and songs that feature this idea.

For example, when one searches for “Baby Yoda” on YouTube, the third most popular result is the following video:

The point of reviewing this is to note that for many people, who have yet to watch the show, most of the things that they have encountered about Baby Yoda prior to watching are not “canon.”

And yet, did this change her or other’s love of the apocryphal material? Not at all.

The Baby Yoda memes raise an interesting situation that should be reflected on by religious scholars everywhere.

It may even help to shed light on the longstanding questions about the development of the biblical canon (specifically the New Testament) and the proliferation of early Christian apocryphal material.

Those who invent the Baby Yoda memes do so knowing from the beginning that they are neither canonical nor true. The audiences of those memes only recognize this as well if they have watched the show.

But those who have never seen the show are liable to accept the memes as, in some way, accurately reflecting the canon until shown otherwise.

What unites both groups is that whether they know already that it’s apocryphal, or they believe its canonical, the material in the memes remains popular because of the meme itself, and not its connection to authoritative tradition.

People like sharing Baby Yoda’s face and the dialogue about “Chiccy Nuggies” because they find it, in itself, a cute and entertaining combination. This is why even people who have no interest in watching the show still share the memes and enjoy them.

On another level, for many fans who do watch the show, what is “true” for the memes is not their literal content, but the spirit of that content which many fans find in harmony with the show’s official character.

Did the early Christians potentially split into similar sorts of groups, with some enjoying the short stories found in the Infancy Gospel of Thomas or James because although they recognized them as fiction, they saw them as true in a deeper way, whereas others assumed the stories were true due to a lack of more knowledge of the more authentic official tradition?

Perhaps thinking along these lines, we could begin to recognize certain apocryphal traditions as more akin to Christian religious entertainment?

And yet, the idea of memes and apocryphal stories is not foreign to the official canon either. A number of things in the New Testament represent something similar.

Or even within the Synoptic Gospels themselves (along with the Coptic Gospel of Thomas), one can see examples of how various disciples and believers were adapting the “essence” of Jesus’s life and teachings into new parables, stories, and statements that although never uttered by Jesus, were believed to be true to and embody his teachings.

These things became part of the canon, despite perhaps having origins similar to Baby Yoda memes.

So what then is the dividing line between those sorts of additions and the kind that the apocryphal Infancy Gospels give us? What made one acceptable of becoming part of the official story, and others rejected?

One answer might be the timeline. By the time the Gospels began to incorporate this material, both the fictional and historical were almost as old as each other and so were both seen as intricate parts of the tradition.

One other answer though might be the purpose: unlike Baby Yoda memes which intend to entertain and emphasize the “cuteness” of the character, the various apocryphal statements and stories about Jesus that grew up over time were believed to embody his teachings and point others toward God.

Perhaps that’s why the Infancy Gospels struggled? They might have been seen by many as more entertaining than edifying.

The material then that was eventually canonized was valued early on not because of whether it was historically correct, but whether it was believed to have accurately reflected and increased the understanding of the community regarding who Jesus was.

So whether or not John was entirely historical, the fact that his interpretation of Jesus was seen by Christians as illuminating who Jesus “truly” is was enough to defend his inclusion in the grand narrative.

We will probably never know for sure why the canon developed the way that it did, nor the many and complicated reasons why apocryphal material was created and distributed so widely by Christians.

But it does seem to me that by studying the current phenomenon of Baby Yoda more closely, we might strangely perceive some of the psychological and social circumstances that similarly helped to shape early Christianity’s canon.

Which just goes to show you that this is one more good reason to go and re-watch the first season of the Mandalorian during your quarantine. May the force be with you… Oh, and of course, Chiccy Nuggies.

Matthew J. Korpman is the author of Saying No to God: A Radical Approach to Reading the Bible Faithfully (Quoir, 2019). Pursuing his Master of Arts in Religion at Yale Divinity School, he did his undergraduate work at Richards Divinity School, where he completed four degrees in Religious Studies, Philosophy and Archaeology. He is an active member of the Seventh-day Adventist church whose research interests include everything from the Apocrypha to the Apocalypse. 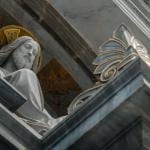