5 Guys from Early Christian History You Should Get to Know

5 Guys from Early Christian History You Should Get to Know November 22, 2013 Zach Perkins

This may not come as a surprise to you, but Christianity is a two thousand year-old religion. For much of my life in Protestantism this little fact was completely off my radar. Two thousand years is actually a really long time and considering that the period after the Reformation makes up only one-fourth of that actual timeline of the church, I believe it’s worth it for all Christians (Protestant, Catholic and Eastern Orthodox) to always try and learn more about those voices of faith who helped guide the church through it’s early struggles to the place it is today.

So I present to you 5 notable people from the 1st through 4th centuries who I consider to be essential. 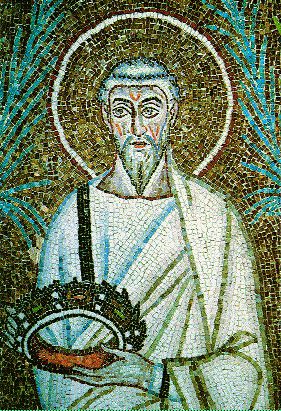 Polycarp was ordained the bishop of Smyrna by John. That’s right –John, the disciple of Jesus. Not much is known about Polycarp’s early life, but the story goes that he was a slave to two men when a godly woman by the name of Callisto redeemed Polycarp, took him into her home and taught him about Jesus Christ. As he grew in compassion and virtue, he decided to serve the Church. In his early teens, he went to learn under John and served under him for 20 years.

Polycarp started as a deacon in the church, doing work to care for the poor, the sick, the widow and the orphaned. Not long afterwards, he was so well-liked by the congregation he became a priest in his local church and was considered an invaluable pastor to his flock.

Polycarp was around 85 years old when he was taken to his death. Christians already weren’t the most liked people in the Roman Empire and mobs had begun to form in Smyrna calling for the heads of any Christian within distance. Fourteen Christians were dragged into the town arena and fed to the lions.  But the mobs wanted more, so they called for the death of Polycarp, who was in hiding during that time. The town guard was sent to find him. They finally managed to find him and brought him to the arena. He was then repeatedly asked to declare allegiance to Caesar and deny Christ. With firm conviction, Polycarp declared over and over again his allegiance to Christ, until he was ordered to be burned at the stake.

The crowd setup the fire and Polycarp told the magistrate that they didn’t even need to tie him to the stake because he wouldn’t bother struggling.  The flames burned around him for well over an hour without consuming him before he was finally stabbed in the chest by a soldier.

Why he’s important: Besides being one of the very first martyrs, Polycarp was one of the first bishops of the church, showing an early line of succession through ordination from the Apostles themselves to later elders and bishops. He also influenced many other faithful men who we have writings from now 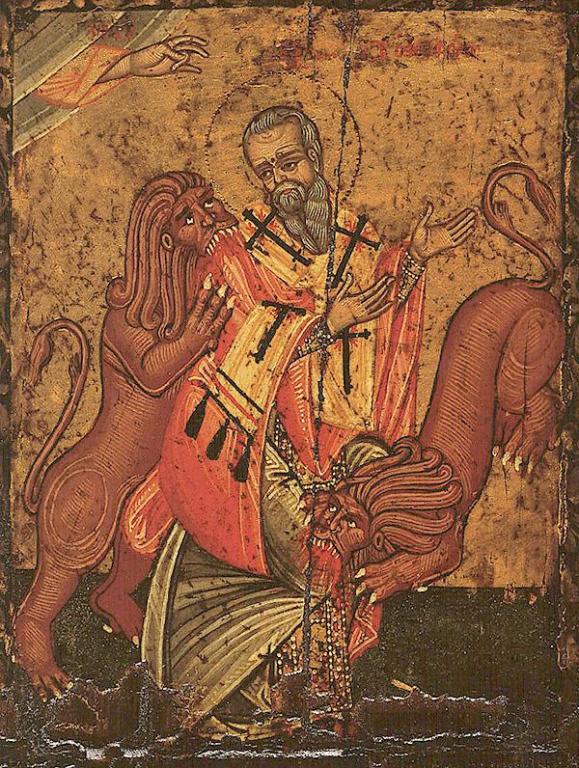 Ignatius came to be a Christian at a very young age. Similar to Polycarp (of whom Ignatius was a friend), Ignatius devoted himself to life in the church and studied under John as well. After some time, he rose to Bishop of Antioch, being ordained by Peter himself according to tradition.

Ignatius was arrested several times by Roman authorities while traveling. It’s during this time he wrote several epistles, some of which survive to this day.

At the turn of the 2nd century, Ignatius was sentenced to be eaten by lions in the famous Colosseum in Rome. His bones were sent to Antioch and they now reside in Rome to this day.

Why he’s important: His epistles are some of the first records about early Christian theology and church life that we have to this day. Largely considered to be authentic, the seven preserved letters of Ignatius show affirmations of Christ’s deity, how to sort out disputes between the presbytery and the importance of the Eucharist, calling it “medicine of immortality” (To the Ephesians 20:2). If any Christian seeks to find the roots of Christianity, the epistles of Ignatius are very important to read. 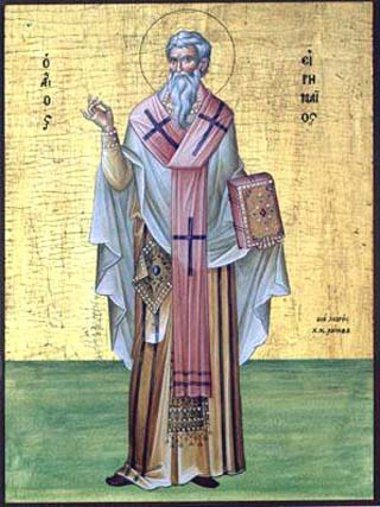 Irenaeus grew up in the 2nd century in the Gaul region, which is now known as France. He studied under Polycarp and is considered one of the greatest theologians that ever lived.

He was also raised in a Christian home. He studied theology from a young age and in his adult years wrote numerous letters against heresies that were continuing to crop up in the church, such as Gnosticism and Montanism. One of his greatest works is called Against Heresies, in which he battles the Gnostic arguments against the church and the divinity of Christ in that day. He continued this work even after being ordained Bishop of Lyons.

Not much is known about his death, but it’s guessed that he died near the end of the 2nd century as a martyr.

Why he’s important: His impact on exploring the theological foundation of Christianity cannot be stressed enough. His work has been referenced centuries after his death. His works also provide a solid foundation for exploring the unity and goodness of God. With the popularity of the “Gnostic Gospels” these days, which are false gospels written by the Gnostic sect in order to shore up their beliefs, it’s important to revisit Irenaeus because he directly addresses Gnostic gospels, such as the Gospel of Judas and dispels the myths propagated in these books. He’s also one of the first individuals in the Church to record down a canon of the many writings we now consider scripture today.

Athanasius is one of the most renowned saints in all of Christian history. He was a bishop during a time of great change in Christianity, wrote the definitive work on the Incarnation of Christ and managed to save Christianity form being overrun by heresy.

Athanasius grew up in a wealthy Christian home and received a prominent education in a Roman school. His intelligence served him well in later years when his skills of persuasion were needed during the Arian controversy. Before that time, Athanasius wrote his definitive works, Against the Heathen and On the Incarnation.

He later became bishop of Alexandria during Constantine’s reign, when Christianity was finally legalized. In 325 AD, he attended the first council of Nicea to settle the Arian controversy. Arius was a Libyan bishop who taught that Jesus Christ was a created being and therefore not co-substantial with God, ergo, Jesus is not God. Athanasius’ arguments at the council are considered to have tipped the scales of opinion amongst the Arian-leaning bishops and under Constantine’s urging, the council created the Nicene Creed.

For a while, Arius and his followers were exiled from the region, but when Constantine died several years later, his nephew Julian, brought back the exiled Arian bishops and a PR campaign was waged against Athanasius and his followers. The Arians started to take over and Athanasius was forced into exile off and on for a total of 17 years. He spent the rest of his life helping heal the wounds in the church after the controversy and died of old age in his home.

Why he’s important: It could be said that Christianity would never be the same if Athanasius had not stood his ground at Nicea and against the Arians. His writing, On the Incarnation is considered the definitive work on the divinity of Jesus Christ. To understand the Trinity and the importance of Jesus’ Godhood, this is the book you have to read. 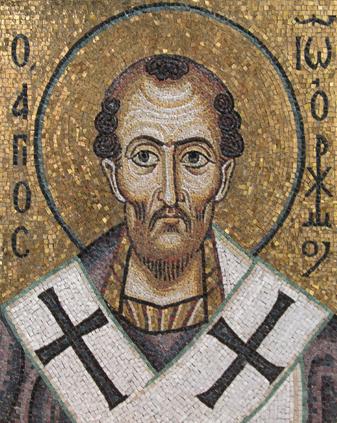 John, Archbishop of Constantinople, nicknamed “Chrysostom” which means “golden tongue” in Greek. He was given this nickname through his great oratory style. He’s considered one of the greatest theologians and preachers of all time. His love of the scriptures and great attention to what the scriptures have to say for every Christian have influenced many Christians throughout the ages.

John’s father died when he was very young and his mother raised him. He grew up fairly wealthy so he was afforded a good education in Antioch. I his adult years, he became deeply committed to Christianity and after studying theology he became a monk and hermit for two years. He had to stop though because his health was deteriorating.

When he arrived back in Antioch, he was ordained an Archbishop and for 12 years he gained notoriety for his speaking. His speaking was well known for calling his congregants to love the poor, spend time in the Holy Scriptures and for calling out corruption amongst church hierarchy.

After a while, John was nominated to be the Archbishop of Constantinople, a very notable position. It wasn’t a position he sought after, but he took it anyway. He kept mostly to himself and lived a simple life, but this didn’t sit well with the political leaders of the time who wanted him under their thumb. He protested quite loudly towards several corrupt leaders, and this eventually got him exiled. He continued to be exiled further and further distances, but at this time he was old and his health could not take it. He died before reaching his destination.

John Chrysostom is one of the most influential church fathers in the East. His popularity gave him the ability to break many misconceptions of Christianity people had. After the time Christianity was legalized, many politicians sought to use their Christian status as a way to promote themselves into higher political status. Chrysostom would have none of this. His sermons are timely for our age as they speak to lavish lifestyles and nominal Christianity.

Also, we can learn a lot from reading his homilies and commentaries. Being as masterful and thorough as he was, his exegesis of the scriptures is still used to this day. His most influential works were his homilies, of which we still have many records.

Zachary K. Perkins Freelance writer, blogger, full-time husband and father of three. Trying to navigate Christianity as a Millennial through the traditions of the Church. You can find him on Twitter or his blog.

November 22, 2013 Question Friday: What media makes you weep?
Recent Comments
0 | Leave a Comment
"The day of my birthday, May 1st, is also a feast day of St. Joseph. ..."
American Patriot Saint Joseph – Actions that Speak ..."
"This is so true! I reread the Practice of the Presence of God last year ..."
Kathy Sullivan St. David Of Wales – The ..."
"One of my favorite saints"
Ame Angela Merici – Humble, Simple, Practical ..."
"Is the Amplified Bible guilty of illegitimate totality transfer? I have compiled dozens of explanations ..."
Michael Weaver The Use of the Bible in ..."
Browse Our Archives
get the latest updates from
The Orant
and the Patheos
Catholic
Channel
POPULAR AT PATHEOS Catholic
1

Pope Francis Did NOT Say EWTN...
Biblical Evidence for Catholicism
Related posts from The Orant