Fill in the blank: “With great power _______” If you know the answer to this, you’ve been exposed to American comic books. “With great power comes great responsibility” is the lesson that a young Peter Parker ignores from his uncle who subsequently dies from a fatal gunshot wound that Parker could have prevented. So what’s sociology have to do with this? Maybe I’m just trying to rationalize something I just enjoy, but I do think comic books are a window into social life. And believe it or not, they can sometimes illuminate aspects about religion we would not normally think about.

Comic books have received surprising new attention in part because the current President of the United States has stated publicly that he enjoyed them while growing up. Yes President Obama has gone on record as saying that his favorite comic book characters are Spiderman and Conan the Barbarian. Marvel Comics ran with this and showcased Spiderman with the new president: 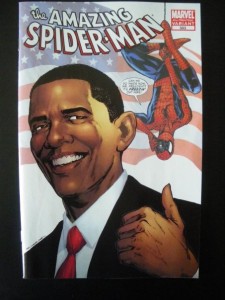 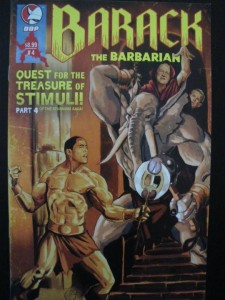 The primary audience for comic books as we all know is males of nearly every age now it seems; the incredible disproportion of male heroes to female heroes demonstrates this. The male heroes usually exhibit power manifested in superhuman and sometimes unearthly form. Strength, speed, invulnerability, energy- all of these are part of the world of super heroes. But since these stories of grown men and women are geared primarily at youngsters, they serve as moral narratives that inform young minds about life. This is not all that shocking to most of us; we understand how this works in any story we share with children from Grimm’s Fairy Tales to Harry Potter. Mainstream comic books simply offer another world (or worlds) in which these same dilemmas of right and wrong, good and evil, trust and betrayal, competition and cooperation, choice and action are all worked out in dramatic fantasy. In sociological terms media like comic books usually (not always) narrate moral values and become part of the socialization experience of many. Parents are always the number one source for modeling morality since they are usually the most visible to children. But comic books and other media can also be a means of socialization.

That said, I was hooked when I discovered this PBS documentary called “Wham! Bam! Islam!” It was a delightful narration of a dream that one Kuwaiti Muslim psychologist, Dr. Naif Al-Mutawa shared with the world: to make his faith accessible to familiar and new audiences through the medium of comic books.

The comic books that most readers of this blog are familiar with are nearly entirely based in America (and almost exclusively in New York [even in DC comics, Gotham City and Metropolis are just “New York by day” and “New York at night”]). And the heroes are almost entirely white and/or American. Interestingly most of our mainstream characters are actually religious and specifically Christian (mainly Catholic and Protestant forms as seen in this list online [hat tip to the individual or group to construct this]).

What’s a Muslim kid (or adult) to do when there’s nary a character in mainstream comic books that he can identify with? Indeed this website of superhero religious affiliations shows a list of Muslim heroes and if you look carefully you will notice that none of the 55 or so are clear central characters in the Marvel and DC Universes. Thirteen are particularly new and appear as a result of Dr. Al-Mutawa’s efforts. 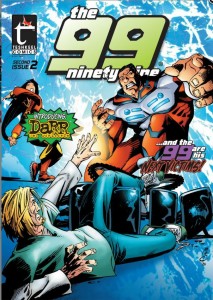 The aim was to create a world in which 99 superheroes emerged from a series of events linked to an archaeological object that’s significant in Muslim history. Each of the 99 represents an aspect of Allah’s character (technically 99 names of Allah). Through this story, the author can then portray Muslim virtue through the behavior and perhaps powers of superheroes that align with basic Muslim theology. As with any form of art that is intended for broad and young appeal, the specifics and accuracy of theology are tempered by clarity of narration. So it’s not surprising that Dr. Al-Mutawa has not gained sympathy from the most orthodox of Muslim theologians.

But for me, what’s so interesting here is not the theological content and whether it’s true to Islam. It’s about the social implications of this. As the second largest religion in the world, Islam has not had a positive portrayal in western cultures. Through the use of comic book superheroes that relate a relatively unheard of Islamic concept in Christian/secular environments, Al-Mutawa helps affirm Muslim identity for youngsters who might feel insecure about their faith in environments where they sense hostility. Imagine the Muslim kid who feels embarrassed about his Muslim faith in Iowa or Paris picking up an issue of The 99 and finding a new way to validate his culture and faith. And for those avid non-Muslim readers of comic books, we’re invited into this new world where heroism is linked with Muslim virtue.

So here’s my main and final point: why hasn’t any Christian thought about doing this with major characters? As the superhero religions website shows in the blurbs on the right, of the 14 “most consistently religious” only Wonder Woman stands out to me as a widely known character and her religion is “Greco-Roman Classical Religion” (she is Amazonian after all). From my experience, Daredevil’s Catholic background stood out to me as the only one among the pantheon of heroes to wrestle with his faith and his behavior. We have little evidence of comic book characters that portray Christian beliefs in ways that might model for young men and women the virtues described in the Christian traditions. Perhaps Christians who are concerned about the socialization of the next generation can learn from this new venture from a Muslim fan of comic books.

July 12, 2012
Map of religion in the United States
Next Post