Popular Civil Religion and the Making of a Texas Convert

Popular Civil Religion and the Making of a Texas Convert July 6, 2012 Jerry Park

On our trek across the mid-Atlantic states recently, I experienced what I might describe as a new awareness of my Texanization (new word, copyright pending). We were at the National Harbor (near Washington DC), a neat plaza-like area flanked on 3 sides by streets and stores and 1 side facing the harbor (I still prefer to say that word like I remember hearing it from locals in South Bend, IN: “hhar-ber”). I was looking down the pier and gazed up at the many flags waving in the soft breeze. And it was at this moment I realized that something in me had changed.

I started looking for the Texas flag. 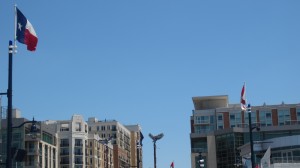 It took 8 years but who’s counting? Truth be told, understanding Texas culture was a part of my daily experience as the many symbols I saw seemed to add-up to what I describe as a popular civil religion. Civil religion is as Margarita Mooney pointed out earlier, quoting Robert Bellah:

“from the earliest years of the [American] republic is a collection of beliefs, symbols, and rituals with respect to sacred things and institutionalized in a collectivity. This religion-there seems no other word for it-while not antithetical to and indeed sharing much in common with Christianity, was neither sectarian nor in any specific sense Christian.”

It is a way of describing the kind of sacred qualities that imbue much of our national culture, from invoking God in speeches and anthems to the use of Biblical allusions and imagery in monuments, memorials and film. With the infusion of the sacred in our national pride we tend to associate American-ness as a kind of semi-religious experience. Indeed many modern nations have some examples of civil religion if one looks closely enough.

But Texas is unique in this regard. It’s not that its civil religious sensibility with respect to the US is so much greater than any other state. It’s that its civil religious sensibility with itself is so remarkable. Texas has its own heroes (e.g. Davy Crockett, Sam Houston, Stephen F. Austin), its own sacred sites (e.g. Alamo, San Jacinto) to be sure. My emphasis here is on the popular dimension of civil religion, which I describe as the everyday faith of civil religion. Texas has this in spades. Much as “God bless America” pins would be an example of popular American civil religion, “God bless Texas” would be a similar example for this state. To point out how unique this is, can you name one other state that with this kind of religious infusion?

in the everyday experience of Texas life. I often like to use my home state of Pennsylvania as a counterexample. I have never seen: 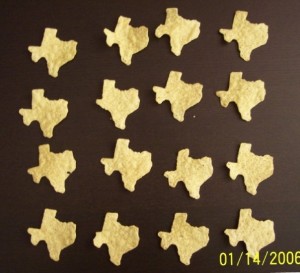 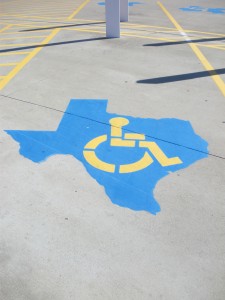 The other image that one sees with remarkable frequency is the state flag. It’s not just that car dealerships seem to compete for the biggest version of the state flag, it’s that the flag is visible in all manner of clothing and art (note the tattoo above).

It would not surprise me one bit if young Texans could well draw the shape of their state AND the state flag given the way these images are branded everywhere. I know of no other state with this degree of commitment to brainwashing, er, socializing the residents and visitors with Texas pride. Indeed I’ve grown so accustomed to these popular civic symbols that I now look for it (or even other state equivalents) whenever I am traveling.

What other states emphasize their identity in ways that resemble the Lone Star state? Any curious examples of Texas tchotchke come to mind?

July 12, 2012 Map of religion in the United States
Recent Comments
8 Comments | Leave a Comment
Browse Our Archives
get the latest from
Evangelical
Sign up for our newsletter
POPULAR AT PATHEOS Evangelical
1