Just days ago, on August 15th, immigration policy in the United States experienced a significant change.  For undocumented immigrants under 30 who came to the United States as children, the Department of Homeland Security will now accept applications for two year stays in the country.  It is expected that about 1 million people will apply this year by the deadline six months away, although in a report released August 14th by the Pew Hispanic Center, it is estimated that up to 1.7 million people may qualify.  While such a plan does not create a pathway to citizenship, it does eliminate some of the fear associated with deportation—at least for two years.

This policy change has not been enacted without opposition. As many recall, the DREAM Act, which proposes a path to citizenship for many of the same people targeted by the current policy, has repeatedly failed to be passed by the Congress. Governor Jan Brewer of Arizona, who is infamous for her stances on immigration, signed an executive order the same day that prevents undocumented immigrants (including those granted “deferred stays” through the policy) from receiving public benefits; a move that effects a potential of 80,000 immigrants in Arizona who would be eligible for stays in the United States.

While I recognize that many readers of the blog will have both strong—and different—views on the current immigration change, I think it also worth acknowledging that this is an issue where evangelicals of various political (and theological) stripes have come together to try and move past bipartisan conflict.  In the Evangelical Statement of Principles for Immigration Reform, released in June 2012, leaders such as Jim Wallis (Sojourners), Jim Daly (Focus on the Family), Richard Land (Southern Baptists) and David Beckman (Bread for the World) came together.

Our national immigration laws have created a moral, economic, and political crisis in America…. As evangelical leaders, we call for a bipartisan solution on immigration that: respects the God-given dignity of every person….

This letter, issued days before Obama announced the potential for undocumented immigrants to receive immunity from deportation, also calls for supporting secure borders, protecting the unity of the family, respecting the rule of law, and establishing paths for legal status and citizenship.

Regardless of how one responds to this recent effort at reform, or more comprehensive strategies being proposed, what does it mean for people of faith to respect and affirm the God-given dignity of every person?  As someone who studies discourse in the public realm, I would argue part of the answer entails examining our language (and assumptions) about others.  While this clearly is not the only way—or even the most central way—to affirm the dignity of one another, it is a start.

What language do we use to talk about immigrants?  “Undocumented immigrants” clearly conjures a different image than “illegal aliens.” There need to be an increased recognition that those who are here unofficially rarely see that as a good option. I often hear comments that people should just come legally; that would solve the immigration problem.  There is a lack of recognition of the real obstacles that immigrants face in coming to the United States.  Respecting the dignity of people requires acknowledging their stories and their realities.  For example, for those coming from Mexico and Central America unofficially, they often face the steadily increasing risk of dying in the desert and being separated from their families.  What are we doing to better understand those stories, and respect the dignity and lives of all in America? 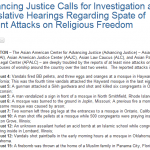 August 20, 2012
Ideals and Realities of Religious Tolerance
Next Post

Your Child Won't Be a Pro...
Ponder Anew
Related posts from Black, White and Gray

So What's the Deal with this "Ashes to...
Ash Wednesday is coming up next week. Those of you who aren't...
view all Evangelical blogs
What Are Your Thoughts?leave a comment
Copyright 2008-2020, Patheos. All rights reserved.