This is the third entry of my series based on my latest book entitled What Motivates Cultural Progressives. Just a reminder that this book contains research gathered from open-ended questions in an online survey sent to members of organizations that have as part of their purpose opposition to the Christian or religious right. The basic argument I forwarded in the first two entries is that cultural progressive activists shaped a movement that meets the needs of the people in the movement, who tend to be white, male, wealthy and highly educated. The social movement led by cultural progressives, like other social movements, develops in ways to serve the individuals in the movement. In my first entry I pointed out that a key value in this movement was the desire to keep religion from mixing with politics. In my second entry I discussed the value of rationality as a theme cultural progressive activists use to legitimate their movement.

In a perfect world, my neighbors would all be interesting, well-informed, atheist, and college educated. They would be concerned for the environment, interested in preserving bio-diversity, reasonably anti-war and concerned about human-rights. They would not impose their moral beliefs on others – they would be supportive of two gay friends getting married, or of a lesbian couple having a baby. They would be supportive, and never judgmental, of a woman contemplating abortion. They would want only science taught in science class. They would not force their atheism on others with symbols or monuments on public property. Such would be my perfect neighborhood(male, aged 46-44, Bachelor Degree).

Cultural progressive activists generally believe that if a person is rational then he/she is automatically going to conclude that a progressive stance on all political issues should be adopted. Acceptance of political progressive ideology is a marker for intelligence. Consequently, the opposite is true for these respondents as well. Those who accept a conservative political ideology must not be very intelligent or are being misled.

The Christian Right appears to be composed mainly of lower-middle class, blue-collar Caucasian workers with limited formal education who use their limited mental abilities to come up with illogical arguments, and then angrily enforce their positions with fear and intimidation (male, aged 56-65, Master Degree).

Texas, and other states dominated by the “Christian” Right, must wrest control of education and social welfare from these rigid, irrational hands. Texas in about 15 years will be a third-world country — uneducated and unhealthy (female, aged 66-75, some college).

Acceptance of an overall progressive political ideology is not merely an agreement among cultural progressive activists, but it is a value that they use to assess morality. Quite simply, cultural progressives perceive those who adopt political progressive ideas as good and those who accept political conservative ideas as bad.
Political ideologies in the United States are not necessarily tied to a consistent philosophical pattern. In reality they are socially constructed. For example, the Sandra Flock episode indicated that many progressives emphasize a value of a publically funded choice as it concerns supporting a woman’s right to an abortion. But these same individuals would not support publically funded choice as it concerns a woman’s right to send her kids to a religious school. Conservatives emphasize a value of life as it concerns abortion, yet they ignore that value as it concerns capital punishment. Political ideologies are really not about a consistent ideology of publically funded choices or life, but rather they develop to serve the interests of certain social groups. It stands to reason that political progressive ideology serves the social interests of individuals who tend to be cultural progressive activists. Those activists tend to enjoy majority group status in our society. How progressive political ideology serves such individuals is a major research question beyond what I am prepared to discuss with this blog. But it is a question that should be addressed by future research.
Values in social movements also are important for creating the identity of those in the movement. This was clearly a theme among many of the respondents. They perceived themselves as political progressives and were proud of that perception.

The Republican is less desirable. I am a Christian, but I am involved politically. I am not a fundamentalist and I am proudly a liberal Democrat (female, aged 56-65, Master Degree).

Ours is the only yard on our street with campaign signs for progressives come election season, but here in Texas supporting progressives (even if there is one on the ballot) is kinda futile, but we still try (male, aged 46-55, some college).

Even though I have discussed the values of cultural progressive activists, there is still a need to comprehend their motivations and approaches towards social change. These values are related to the motivational and diagnostical frames they use but the values, in and of themselves, do not completely explain those frames. In the next, and final, entry to this blog series I will explore these frames in more depth.
Previous Post 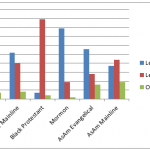 October 8, 2012 Unplanned Pregnancies: The Subtle Assault on Half of Us
Recent Comments
11 Comments | Leave a Comment
"George is right, Sam. Republicans and others only ask for the right to practice their ..."
True Why I am Supporting the American ..."
"If the "right to worship as you wish" means following scripture like Genesis 2:24, they ..."
True Why I am Supporting the American ..."
"I'm curious...did you ever read the book and review it?"
SamHamilton What I like About the Benedict ..."
""Science" guy, Bill Nye - R-rated:https://www.youtube.com/wat..."
See Noevo Bill Nye, the “not-so-science” Guy
Browse Our Archives
Follow Us!