It’s no surprise that part of my interest in sociology is autobiographical, and this week’s selection of a new pope brought me back to some of my own history with the Catholic Church. One of my most recent cultural encounters with Catholicism was at my father’s funeral. While he was not a religious person for most of his life (according to his friend) the last decade or so included weekly attendance at St. Basil’s with one of his siblings and his family.

St. Basil’s is one of the main Catholic churches for Los Angelenos and is well-positioned for walking from Koreatown. During my two days there, I witnessed specific Korean prayers and even modes of prayer that I had not seen in my years growing up in mixed-ethnic Catholic churches in New Jersey and Philadelphia. Three years later, I’m reminded of how significant Catholicism is for many Korean immigrants and many Koreans.

Given my interest in Asian America, I immediately wanted to know more about the Asian scene of Catholicism and its possible relevance to US Asian Catholics. I didn’t have time to find every Catholic figure for the same year in every Asian country, so I focused only on the top 6 countries that have been sending immigrants to the US since 1965: China, India, Japan, Korea, the Philippines, and Vietnam. This is a graph I made of the Catholic distribution across these nations, with an additional placeholder for all other Asian Catholics that are not from the aforementioned nations: 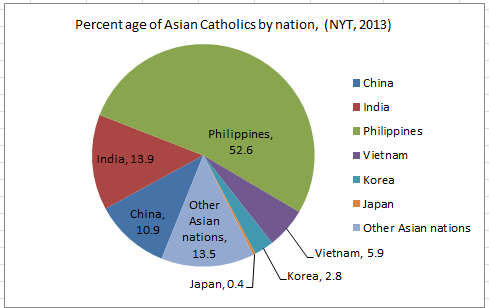 The main 6 countries add up to more than 2.8 billion people in 2010 including the two most populous countries, China and India. Given their size even the small percentage that claim to be Catholic is quite large with 15 million in China (1.2% of the population) and 19 million (1.6%) in India. To put this in perspective, there are about as many Catholics in China compared to Canada, and more than in Angola, Chile, Ecuador, Guatemala, Tanzania, and Uganda. From a US perspective there are only 3 states with populations that are larger than the Catholic populations of China and India: California, New York, Texas. Of the remaining Asian nations, the Catholic giant in Asia is the Philippines at 72 million and this constitutes about 78% of that nation’s population, and 53% of all Asian Catholics. Vietnam and Korea have a 6 and 3 percent share of Catholics respectively and slightly more than 500,000 Catholics reside in Japan (a 0.4% share of all Asian Catholics). Here are two images, one is a photo I took while traveling in Seoul of a Korean Mary and Jesus, and the other is a Vietnamese Mary and Jesus. 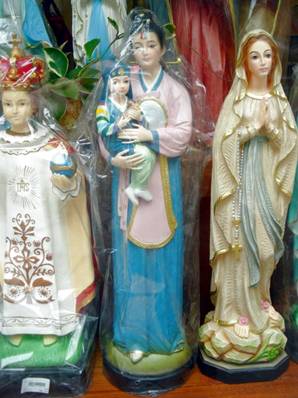 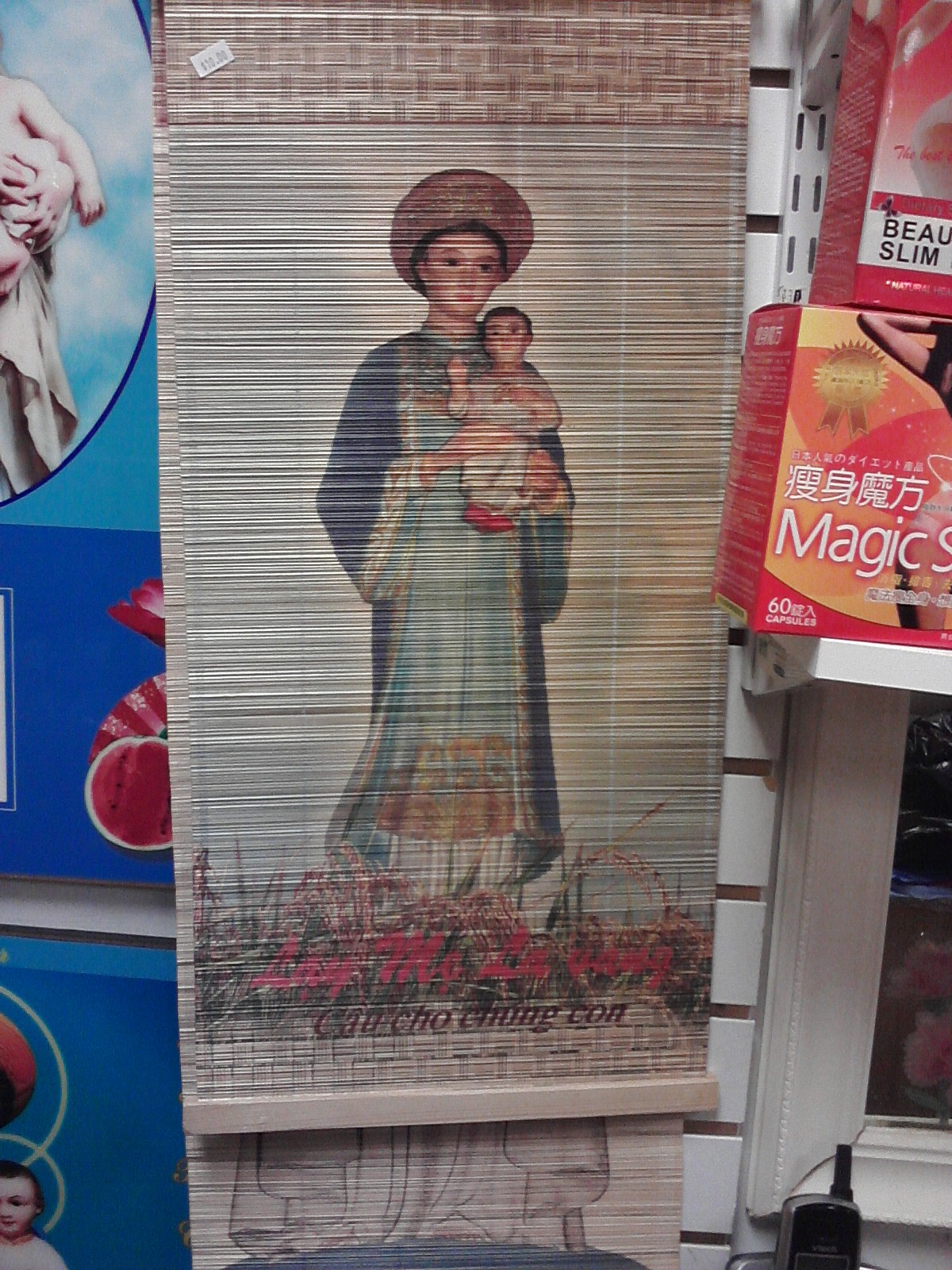 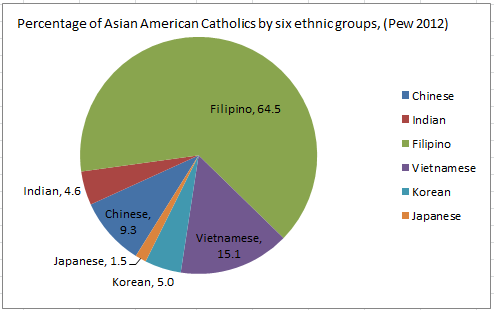 Encountering Asian American Catholics is somewhat of a rarity given these figures, and their practices vary based on the heritage they retain from the countries that many of the immigrants bring with them. Whether it is transmitted effectively to the next generation remains to be seen. One of the practices that interests sociologists is that of civic engagement. To what extent are Asian American Catholics participating in American civil society and within ethnic or Catholic communities? A few studies have emerged on the remittances sent by Filipino Catholics, as well as the larger scope of Asian American Catholic voluntarism relative to other religious groups (a couple of these were studies conducted by me and sociologist Elaine Howard Ecklund). These studies suggest that Asian American Catholics are similarly active in civic activities whether religious or secular, and in some instances financial support across the Pacific flows through religious networks. Ties between Catholic and non-Catholic local communities as well as transnational ties between US and non-US Catholic communities continue a pattern we have seen historically in the American Catholic experience. While travel and communication technology have allowed many of these ties to be stronger or more efficient, the ethos remains the same. The difference appears to be the source of Catholic migration which is much more Latin American and steadily Asian as well.

In editing the pie graphs I discovered some important discrepancies in the numbers reported by the New York Times and the Pew Research Centers. Stay tuned for a post that reveals differences in the portrait of Catholic diversity based on different sets of data.