I decided to take a page from Mark Regnerus and look at some old data to give it a new twist. Sometimes looking beyond the original intent of the data can provide interesting findings. For example, a couple of years ago my book Compromising Scholarship came out and documented academic bias against religious and political conservatives. It is mainly based on a survey I sent to academics in several disciplines. You can find the details of the survey in the book and how the findings support my contention that a real bias exists against conservative out-groups in academia.

But that is not the issue I wish to blog about today. I want to look at the general idea about tolerance, or accepting those who see things differently than us. My personal experience is that often the people who talk about how important tolerance is are often the most intolerant people I encounter. They are quite tolerant towards those they agree with, but that is not a good measure of tolerance. Real tolerance only becomes relevant when we encounter those we disagree with. It is here that a lot of people who like to talk about tolerance fail. So many times I hear such individuals talk about tolerance one minute and the next minute they are stating some of the most uncharitable stereotypes about their political and/or religious out-groups. My experience is that they are often political and religious progressives who do not see that they are as intolerant as they imagine conservatives to be.
But that is merely my experience. That experience can be corrupted by my own bias. For example, although I am a political moderate, I may be more sensitive to these observations among political progressives since I encounter so many of them in academia. I am more religiously conservative than the vast majority of my colleagues and that may also bias my observations. Until I conducted the research for my book I had to be content with having this observation with no data to support or refute it. But in that survey I asked academics about the qualities they want and those they don’t want in the people they work with. “Tolerance” was on the list of the qualities that academics were asked about wanting in a colleague and “narrow-mindedness” was on the list of the qualities that academics were asked about not wanting in a colleague. I did not report on this question in my book as it was not the focus of my investigation, but in this exploration of measuring the open-mindedness of those who preach tolerance the question is very relevant.

This table can be read in this way: those who were likely to state that tolerant was important to them were very slightly less likely (-.003) to be more willing to hire someone who is a Democrat. Those who were likely to state that narrow-mindedness was something they did not want to see in a colleague were slightly more likely (.075) to be more willing to hire someone who is a Democrat. These correlations are not huge, but the ones under the narrow-minded variable were statistically significant at least to the at p < .01 level. None of the correlations coefficients under tolerant variable are statistically significant. An observation worth making is that under the narrow-minded variable, with the exception of accepting ACLU members, the negative scores of rejecting out-group members are more powerful than the positive scores of accepting in-group members. It may be human nature to be more likely to reject our enemies than to accept our friends. I am curious about whether there is other research that would test the relative strength of hatred of enemies as compared to love of friends.
But more important than this tendency to reject our enemies is the qualitative difference between the valuation of tolerance and the opposition of narrow-mindedness. Once again making the logical assumption that most of these respondents are irreligious and politically progressive, the valuation of tolerance is not connected to rejection of out-group members or even support of in-group members. But those who reject narrow-mindedness also concentrate on rejecting their out-group members and offering support for their in-group members. Approving tolerance, or focusing on promotion of a positive quality, is not linked to rejecting others but focusing on negative qualities, such as narrow-mindedness, does lead to such rejection.

One may argue that such a position is not hypocritical. After all it may be the respondents’ opinion that the groups they reject are narrow-minded and thus they are justified in rejecting them. But it not lost on me that these respondents are stating that people they do not like should be hindered from fairly obtaining a job in academia. Such a response does seem to be a type of narrow-mindedness that should be resisted by fair-minded people. I am of the opinion that our religious and political opinion should not factor in an academic hiring decision, with the obvious exception of institutions with a religious mission. That attitude is a broad-minded approach to including people that I may not agree with in my workplace. An opposite approach of rejecting those with different religious and political opinions for employment seems to be narrow-minded to me.
These results emerge from a sample of academics, which is not representative of the larger society. Furthermore, I only selected certain disciplines and there may be a response bias influencing these results. So I am very careful about generalizing this to the rest of society. I rather think of these results as something that can be instructive and maybe someone in the future will design a study that has more far ranging implications. But even given these limitations I am still comfortable stating that at least among these academics, rejection of narrow-mindedness is correlated with rejection of out-group members in what I would argue is a non-tolerant manner.

My expectation that those who talk about how tolerant they are often end up being intolerant does not seem to be true, at least not with this sample. The problem may be with my memory and possible confirmation bias on my account. Perhaps previous friends and acquaintances talked more about the intolerance of others but I remember them as touting their own tolerance. I may have remembered what I perceived as hypocrisy but confused it as their claim that they are something that they are not when in fact those I interpreted as hypocrites assert a hatred for something that they were. If this is true then it is one more reason why we should not just rely on our own personal experience, but should seek out data to confirm or refute our social beliefs.
I take from this that seeing tolerance as a positive value does not lead to being intolerant. But focusing on the “narrow-mindedness” of others is correlated to having elements of that intolerance ourselves. The larger lesson here may be that looking at the negative qualities in others may reflect problems we ourselves have. Someone once told me that the characteristics people hate the most are the ones they themselves tend to have. For example, the person who hates gossip often has problems gossiping his/herself. I know from personal experience of individuals who do not tend to trust others often do so because they themselves are untrustworthy. This data may reveal another case of this aspect of the human psyche. Those who focus on the narrow-mindedness of others may do so since they see it in themselves and do not like what they see. 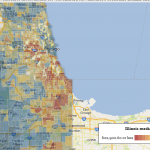 March 1, 2013
The Three Segregations and Asian America
Next Post