Baizhang and the Fox

The Barrier That Has No Gate

Baizhang and the Fox*

Every time Baizhang gave a dharma talk, a certain old man would come to listen. He usually left after the talk, but one day he remained. Baizhang asked, “Who is there?”

Immediately the man had great realization. Bowing, he said, “I am now liberated from the body of a wild fox. I will stay in the mountain behind the monastery. Master, could you perform the usual services for a deceased monk for me?”

Baizhang asked the head of the monks’ hall to inform the assembly that funeral services for a monk would be held after the midday meal. The monks asked one another, “What’s going on? Everyone is well; there is no one sick in the Nirvana Hall.” After their meal, Baizhang led the assembly to a large rock behind the monastery and showed them a dead fox at the rock’s base. Following the customary procedure, they cremated the body.

There are some magical elements in this and I don’t want to get hung up on those. They exist to teach us something, and don’t need to be taken literally.

A fox, first of all, in Chinese culture was like a trickster spirit, a creature that will try to trick you. We could say it’s like a devil, but it doesn’t have sinister connotations, so maybe more like a leprechaun.

So, he was born as that because he gave an incorrect answer. Does a great person fall into cause and effect?

What I think of when I think of this is: actions have consequences. It’s pretty clear to me that cause and effect are universal. It’s a Buddhist teaching but also a common sense idea. It’s something we try to hide from sometimes, but it’s pretty clear. You eat too much and you’re going to feel bad. If you treat people badly, they won’t like that. Cause and effect.

Does a great person fall into it?
What that makes me think of is this. Some people have this expectation. They think if they meet a Buddhist they’re going to be calm and even. They’re going to be kind and not torn up by things or carried away by the vagaries of life. If people think of Buddhists that’s what they think of sometimes. They don’t realize that we’re doing this because we need it. We’re struggling and we want to be better. Buddhism isn’t going to just make you calm and serene all the time. Having that expectation is unfair, in the same way that Christianity doesn’t make people really live like Jesus very often. Buddhism doesn’t make you calm and serene and able to have boundless compassion, at least not often and not easily. We still have to work at it.

So if you’ve ever had the experience where you’re frustrated about something and someone says, “That’s not very Buddhist of you” They’re in that trap, the same trap as the old man. The trap of thinking, “If you’re Buddhist you should be able to handle this. You should be ok, you shouldn’t be depressed. You shouldn’t be frustrated when you’re kids don’t listen or mad when you don’t get the promotion you deserved at work. You should just be sort of okay with everything. “

That’s really unfair because we’re all just people and we’re all struggling. Buddhism is not going to flip a switch and just change everything and make you not fall into cause and effect, that is make you not deluded anymore. Not all at once, suddenly, at the beginning. What it is going to do is help you build a framework to get a little better. When we become buddhist and have a diligent meditation practice, it doesn’t mean we’re not going to struggle anymore. It doesn’t mean we won’t have cravings and give in to those sometimes. It doesn’t mean we won’t get upset when things go wrong. It just means we have tools that we can use when things go wrong. Sometimes we won’t be able to use them, or we won’t want to. But we have the tools, that’s the point. We have the tools because of our diligent regular practice.

So, we still fall into cause and effect. We still stub our toe and swear. We still yell at our kids when they don’t listen. We still eat too much ice cream. We do all those things but we also have the tools to be a little better. We’re turning our minds toward wisdom, and compassion, and mindfulness. But that said we all stumble and we always, as far as I can tell, we always will. The point is we have the tools to get a little better and better. Some people say you shouldn’t think about buddhism like that. I’m sympathetic to that view but I think we can think on two levels. Yes our true nature is wise and compassionate, but at the same time we are in the ordinary world and what we’re trying to is just tune in to our true nature more often, to be able to turn our minds toward wholesomeness and virtue, mindfulness and compassion, and away from our delusions, cravings, selfishness, and obsessions. We’re training our minds to turn them in a better direction instead of always feeding our egos and our endless desires.

So to expect perfection from ourselves or from anyone, even buddhist teachers who have been practicing a long time, is not fair. We need to be working on ourselves and not worrying about whether others are working on themselves well enough. The one we should be expecting things from is ourselves. But at the same time we don’t need to tear ourselves down if we’re having a tough time. We will have a tough time. That’s the nature of things. We need to keep that in mind. We can only try to get better, to slowly get better and better.

That’s my interpretation of falling into cause and effect. We still let shit get to us, even when we know we shouldn’t. And sometimes we’ll even know. We’ll think, “This is nonsense, why is this bothering me?” but it still bothers us even though we’re aware of it. Having that kind of awareness helps because it’s proof that it’s working. The next thing after that is maybe sometimes we can put down our baggage and just go on with our lives.

I think some people come to meditation practice, and maybe they even practice for a while, and they’re just thinking that things aren’t getting better. We have to trust the process and we have to know that we’re training. And it’s just like anything else, like lifting weights or training for a marathon. You’re going to slowly get better and progress will be slow. And at times we may not notice. That’s the frustrating thing, when we’re not even aware. Sometimes things won’t bother us and we don’t even notice them. We don’t even realize some of our successes. And sometimes we’ll see our problems more clearly and we’ll think, “Well this isn’t really helping, it’s just showing me what a broken person I am.” But it does help. That’s the step that leads to the next step.

Baizhang’s answer was, “A great practitioner isn’t deluded by cause and effect.” And that is just that we learn how to see where we struggle. The delusion is not even seeing it, not even knowing where we struggle and where we don’t. Once we learn where our struggles that can be very helpful to us. Knowing what we need to work on is important.

The lesson is don’t be so hard on yourself. Don’t have this expectation that you’ll meditate for a while and then nothing will bother you ever again. I don’t believe that ever happens. Be humble and don’t expect yourself to be perfect.

(*this version of the Wild Fox Koan was translated by Kazuaki Tanahashi. I found it on Wikipedia: https://en.wikipedia.org/wiki/Wild_fox_koan) 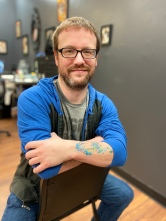 About Daniel Scharpenburg
Daniel is a Dharma Teacher, writer, and podcaster. In his day job he’s a labor activist and government worker. Daniel has been practicing Buddhism and meditating for over twenty years and has practiced with many different teachers. Daniel trained and ordained as a Chan Dharma Teacher in the Dharma Winds tradition. You can read more about the author here.
Previous Post

August 28, 2020 The Four Foundations of Mindfulness
Recent Comments
0 | Leave a Comment
Browse Our Archives
get the latest from
Bodhisattva Road
Sign up for our newsletter
POPULAR AT PATHEOS Buddhist
1