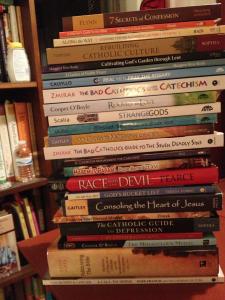 I suppose I could hoard worse things than Catholic books.  I once saw a show on people’s collections and one person collected used oil can’s from the 1930’s, another had thousands of penguin stuffed animals lining every inch of her home, and another woman collected rooster salt and pepper shakers.  All entirely fine but may I say reading great Catholic books helps us not just in this life, but into eternity!  No rooster salt shaker can do that.

The books just seem to come to me.  They’re seeking me out, somehow knowing the journey I’m on and just the kind of book I need and will dive right into.

Earlier on in my reversion to the Church, someone would suggest a book here and there to help me with my endless questions.  I’d pick up a couple in the library, and received a few as gifts.    One book would make me wonder about a whole other aspect of the faith and I started seeking out topics on my own.  Once I ordered a few, catalogues full of great Catholic titles tempted me to order more than I could read in an entire year.

As I became more involved with other practicing Catholics, life changing books would be recommended at prayer groups, rosary groups, retreats, talks.   My stacks of books grew and I’d be reading 3 or 4 at a time.  I had less and less interest in anything fictional or unrelated to seeking and finding God.  Church history, evangelizing, dealing with suffering and using it wisely, healing, apparitions, why we believe what we believe, purgatory, indulgences, miracles….each topic held its own fascination.

Recently a very holy woman I knew passed away, a few years after her equally holy husband.  Over the decades, this couple somehow managed to find time to read hundreds of books while raising ten children.  When I was offered whatever books the adult children didn’t want, I was like a kid in a candy store.  You mean I can have all of them?? I just couldn’t let them go to waste, knowing how my life has been transformed – and is still transforming – by simply reading the right books.  There were literally floor to ceiling shelves in almost every room, and 99% were Catholic.  Armed with boxes and bags, a friend and I perused the shelves.  I found an occasional book on African violets, but most were about living life devoted to Christ and getting ourselves to heaven.   Better yet, this beautiful couple, married 65 years, had their handwritten notes on the sides of pages here and there:  Wow!  Make a copy of this.  Send this to Jean.  Big stumbling block for me.  Pure genius.  Remember this.  Tucked inside more than a few books were various prayer cards from wakes of people loved and lost, meeting reminders (rosary Tues. 7 pm Barbara’s),  and scraps of paper with names of people to pray for on them.

I started out planning to limit myself to just to just the books I wanted to read, but then I had an inspiration….I can find people who really want these books.  When I arrived home with the first car load and asked my 23 year old son to haul them in, I got this fun comment: “This has gotta be the weirdest thing you’ve done yet.”  (I’m thinking, oh I’ve done much weirder stuff than this, while praying that maybe some day he’ll be just as fascinated by the truth of Catholicism as I am!)

So I sent out an email, which was forwarded around.  First I heard from a deacon who has a prison ministry.  I couldn’t wait to give him a box of books.  What a thrill it was to find people who didn’t just want the books, they needed them.  Then I heard from an Indian couple, living in the U.S. for a few years.  They said their area of India has a good number of Catholics, but for some reason it’s extremely difficult to get books and evangelization materials there.  They took at least 300 books, along with a few statues of the Blessed Mother and Sacred Heart of Jesus, and a bag of rosary beads.  A young brother and sister, both recent converts, took a shopping bag full.  A friend’s daughter and son in law took a few box fulls for their homeschooling group, and a revert to the faith said a number of titles “just jumped out” at her.   The next best thing to hoarding and reading great Catholic books is giving them to others!

I came across a book list put together by Fr. John McCloskey, Opus Dei priest and fellow book-lover.  His “Catholic Lifetime Reading Plan” lists the 100 best Catholic books of all time (the late Fr. John Hardon wrote a book with the same name.) From the Catechism to True Devotion to the Holy Spirit to Spiritual Combat, each book leads to a clearer understanding and a firmer faith to stand on.  If you want to get started on the road to holiness, check out this great list.  I’ve read quite a few that have helped get me on the right path.  Now I just have to keep reading to stay on it! 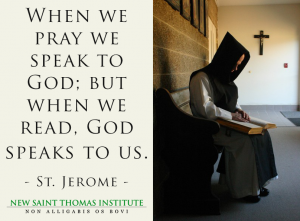 Lord of the World by Robert Hugh Benson
The Diary of a Country Priest by George Bernanos
Hopkins: Poetry and Prose by George Manley Hopkins
Don Quixote by Miguel de Cervantes
The Divine Comedy by Dante Alighieri

Confessions of St. Augustine by St. Augustine
Little Talks with God (modernized version of “The Dialogues”) by St. Catherine
City of God by St. Augustine
The Problem of Pain by C. S. Lewis
Dark Night of the Soul by St. John of the Cross
Mere Christianity by C. S. Lewis
The Screwtape Letters by C. S. Lewis
The Everlasting Man by G. K. Chesterton
Orthodoxy by G. K. Chesterton
The Greatest Story Ever Told by Fulton Oursler
Meditations from a Simple Path by Mother Teresa
Interior Castle by St. Teresa of Avila
The Way of Perfection by St. Teresa of Avila
Story of a Soul by St. Therese of Lisieux
My Way of Life/Summa Theologica by St. Thomas Aquinas

Difficulties in Mental Prayer by Eugene Boylan
The Tremendous Lover by Eugene Boylan
Covenanted Happiness by Cormac Burke
The Soul of the Apostolate by Jean-Baptiste Chautard
Friends of God by Jose Maria Escriva
Christ is Passing By by Jose Maria Escriva
The Way, Furrow, The Forge by Jose Maria Escriva
Way of the Cross by Jose Maria Escriva
All for Jesus by Frederick W. Faber
Abandonment to Divine Providence by Jean-Pierre De Caussade
Introduction to Devout Life by Francis deSales
Treatise on the Love of God by Francis deSales
Three Ages of Interior Life Volume I by Fr. Reginald Garrigou-Lagrange
Three Ages of Interior Life Volume II by Fr. Reginald Garrigou-Lagrange
Sinner’s Guide by Venerable Louis of Grenada
The Imitation of Christ by Thomas A. Kempis
True Devotion to the Holy Spirit by Luis M. Martinez
True Devotions by Louis-Marie Grignion De Montfort
The Hidden Power of Kindness by Lawrence G. Lovasik
The Betrothed by Alessandro Manzoni
The Sadness of Christ by Thomas More
Conversation with Christ by Peter T. Rohrbach
Spiritual Combat by Lorenzo Scupoli
Theology and Sanity by Francis J. Sheed
Theology for Beginners by Francis J. Sheed
To Know Christ Jesus by Francis J. Sheed
Life of Christ by Fulton J. Sheen
Three to Get Married by Fulton J. Sheen
The Spiritual Life by Adolphe Tanqueray
Abba Father by Bonaventure Perquin
Transformation in Christ by Dietrich von Hildebrand

Crossing the Threshold of Hope by Pope John Paul II
Companion Guide to Rome by Georgina Masson
The King’s Good Servant but God’s First by James Monti
50 Questions on the Natural Law by Charles E. Rice
The Intellectual Life by A. G. Sertillanges

Essays on Woman by Edith Stein 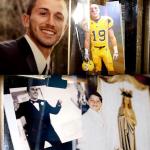 April 23, 2018 Hospital Removes Alfie Evans’ Life Support Over His Parents’ Objections
Recent Comments
2 Comments | Leave a Comment
Browse Our Archives
get the latest from
Catholic
Sign up for our newsletter
POPULAR AT PATHEOS Catholic
1

Not a Gumball God - A...
Faith on the Couch
Related posts from Born Again Catholic 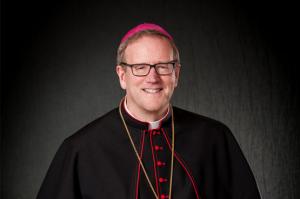