Awkward: The President Asks a Cashier if He’s Gay 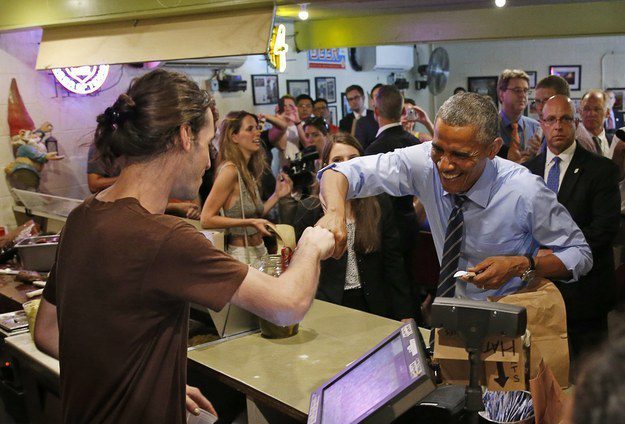 This is one of the weirdest things I’ve read:

During his recent trip to Austin, Texas — after shaking hands with a guy wearing a horse head in Denver — President Obama’s had an exchange with an employee of a popular joint that is raising eyebrows. When the president got up to the register (after cutting in line) at Franklin Barbecue, he was met by cashier Daniel Rugg Webb.

“Equal rights for gay people,” Webb said to the president.

“Are you gay?” President Obama asked, which apparently is a perfectly acceptable, not weird thing to ask that doesn’t involve making any assumptions.

“Only when I’m having sex,” the cashier responded.

The president laughed at Webb’s comment, before saying, “Not in front of the kids.” The two bumped fists before President Obama went on his way.

Obama, as President… just like Washington, Lincoln, and Reagan. Classy.

July 17, 2014 Chicago Residents: Obama Will Go Down as Worst President Ever
Browse Our Archives
get the latest from
Politics Red
Sign up for our newsletter
POPULAR AT PATHEOS Politics Red
1