Growing up my maternal Grandmother frequently told me stories about our family’s Scottish heritage. As far back as I can remember, I have felt a deep connection to Scotland and it has remained with me to this day. It is a place that ceaselessly inspires me, both igniting my emotions and captivating my imagination. But while there are many things about Scotland that fascinate me, it is the country’s Witchcraft history and folklore that I’m particularly drawn to. And within my practice as a Witch, finding ways to incorporate this history and folklore has been very important. There are numerous ways in which I go about this, but one of the most important is my partnership with the Goddess Nicnevin.

Nicnevin isn’t a Goddess you often hear about (if you have at all). In comparison to other deities, there isn’t much written about her. Yet, when I first read of her in Michael Howard’s Scottish Witches and Warlocks, I was instantly entranced. And while, through working with her as my matron deity, I have learned much more about her, she remains an enigmatic Goddess without a clear written history.

Therefore, the goal of this article is to gather together the few recorded references to Nicnevin in hopes of gaining a clearer perspective of who she is and where she comes from.

To start our exploration of Nicnevin, let us first begin by considering the meaning of her name.

A popularly cited etymological origin for Nicnevin is the Gaelic “Nic an Neamh,” which is said to translate to “daughter of frenzy.” It’s purported that this possibly connects her to the Irish battle Goddess Neamhan, who causes frenzy among soldiers at war. While this is certainly a romantic theory, I have found that, instead of frenzy, Neamh actually translates to heaven. This in turn fits well with a different claim, that Nicnevin comes from “Nic Noahm” which roughly translates to “Daughter of the Saint.” As to who this Saint may be, there has been some debate, with Brigid being named as a possibility.

Brigid, in some stories, is viewed as a seasonal deity who is partnered with the Cailleach who rules over the Winter months. The Cailleach (whose name translates to “old woman” or “hag”) is sometimes referred to as the Gyre-Carline. Gyre possibly comes from the Norse geri meaning “greedy” or gýgr meaning “ogress.” Carline is an old Scots word meaning “old woman.” As we will see later, Nicnevin is also at times referred to as the Gyre-Carline. Additionally, it is said that the Cailleach has power over land and sea, being able to transform the landscape around her. Nicnevin, too, is said to possess these powers.

Finally, another proposed etymological origin for Nicnevin is Nc (translating to “daughter of”) and Nevis. While the veracity of this theory is questionable, it’s interesting to note here as Ben Nevis (from the Gaelic Beinn Nibheis, or mountain of snow) is thought to be the home of the Cailleach.

Moving forward with our study, one of the earliest written references to Nicnevin comes from Alexander Montgomerie’s poetic duel (or ‘flyting’) with Patrick Hume of Polwarth in the year 1585. At one point in the duel, Montgomerie claims that Hume is the child of an elf and an ape. Within this speech he describes a conversation between the Weird Sisters about the fate of baby Hume. During this discussion, the second sister says to the baby that “Nicneuen sail norish thee twyse.” Soon after which, the Goddess herself appears:

Then a cleir companie came soone after closse,

Whose cunning consists in casting of a clew

The baby is swiftly taken away by Nicnevin and her nymphs, who are noted as being “venerable virgines whom the world call witches.” They take Hume with the intention of raising him to be an “imp of all ill, apt for their arte,” proclaiming that:

Nicneuen as nurish to teach it gart take it

To saill sure in a seiffe, but compass or cart;

And milk of an hairne tedder, though wiues sould be wrackit,

Two centuries later, Sir Walter Scott made mention of Nicnevin in his novel The Abbot. In the story, there is a character known as Old Mother Nicnevin who is known as a Witch. In a footnote Scott remarks that “This was the name given to the grand Mother Witch, the very Hecate of Scottish popular superstition. Her name was bestowed, in one or two instances, upon sorceresses, who were held to resemble her by their superior skill in ‘Hell’s black grammar.’”

In 1830 Scott again referred to her in his book Letters on Demonology and Witchcraft. Here he made mention of a “gigantic and malignant female, the Hecate of this mythology, who rode on the storm, and marshalled the rambling host of wanderers under her grim banner. This hag (in all respects the reverse of the Mab or Titania of the Celtic creed) was called Nicneven.”

Fifty years after this, she was mentioned in Cromek, Cunningham, and Gillespie’s Remains of Nithsdale and Galloway Song. The authors connect her with the Gyre Carline (who we will explore further on), calling her the “mother of glamour, and near-a-kin to Satan himself.” It’s remarked that she presides over the Hallowmass Rades and can be seen wearing a long gray mantle and carrying a magic wand which gives her the ability to convert water into rocks and sea into solid land.

Yet another avenue to explore is the possible historical basis of Nicnevin, not as a Goddess but as a real (in the physical sense) woman.

Recall for a moment how Sir Walter Scott claimed that the title Nicenven was sometimes given to Witches of certain stature. For example, he makes mention, in Letters on Demonology and Witchcraft, of a ritual led by “the sorceress Marion MacIngarach, the chief priestess, or Nicneven, of the company.”

Adding further evidence to this theory, a mention can be found in The Historie and Life of King James the Sext (1825) that in 1569, at St. Andrews, “a notable sorceress callit Nic Neville, was condammit to the death.”

74 years later, in 1643, a man named John Brughe was put on trial for Witchcraft, which he had supposedly learned from a widow by the name of Noance VcClerich. Interestingly enough, VcClerich was said to be the sister of Nik Neiving who was noted as being “that notorious and infamous witch in Monzie.”

Some have speculated that this “Witch of Monzie” may have been a woman named Kate McNevin who lived in the area and was supposedly executed as a Witch in 1615.

When we bring together these various strands of information, we begin to see a clearer picture of Nicnevin. Granted, there are no absolute facts or definite conclusions and in the end, all we can do is speculate. For there here are many possibilities of who Nicnevin is and where she came from and we cannot say for sure which one is more true than the others.

For example, it is possible that Nicnevin originated as a woman who was executed as a Witch. Perhaps this was the very Nic Neville who was burnt in 1569. Maybe it was she who, sixteen years later, inspired the character in Montgomerie’s Flyting. It could be that, over time, the name Nicnevin grew to become a colloquial term for Witches. And as time has gone on, these Witches began to meld into one archetype, the Grand Mother Witch.

Whatever her true origins, the fact of the matter is, Nicnevin has become a Goddess in her own right. Through centuries of blending and weaving, she has emerged a powerful Witch Queen. A large Hag clad in gray who rides on the sky on stormy nights, accompanied by a congregation of nymphs and ghosts. A Goddess of Witchcraft who can transform both land and sea, and specializing in acts such as glamoury, casting charms, diving the future, and magical travel.

Letters on Demonology and Witchcraft, by Sir Walter Scott

Remains of Nithsdale and Galloway Song, by Cromek, Cunningham, and Gillespie

The Abbot, by Sir Walter Scott

The Annals of Auchterarder and Memorials of Strathearn, by Alexander George Reid

The Historie and Life of King James the Sext, by John Coville and Thomas Thomson 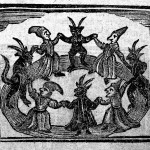 January 18, 2018 A Brief History of Modern Traditional Witchcraft
Recent Comments
0 | Leave a Comment
"I didnt care to finish my conversation but the other half goes like this: I ..."
Brianna LaPoint Introduction
"I was approached by Wesley Chiu of Callisto Media to write a book for them ..."
Madame Pamita Suspicious Witchy Authors: My Final Thoughts
"Thank you to the people who felt compelled to correct my grammatical error. You really ..."
Kyuss Why Men Cannot be Witches
"For me, traditional witchcraft is the kind of witchy work I do and was passed ..."
Estigia Introduction to Traditional Witchcraft pt. 1
Browse Our Archives
get the latest from
Pagan
Sign up for our newsletter
POPULAR AT PATHEOS Pagan
1

Six Ways My Catholic Upbringing Prepared...
Star and Snake
Related posts from By Athame and Stang