The Cartomancer: The Full Moon Cut

These days I’ve been sharing my love of all things Zen as represented in popular culture, more specifically in Japanese and Chinese samurai and martial arts films from the 60s.

One of my favorite Japanese actors is Raizo Ichikawa, who famously played the swordsman Nemuri Kyoshiro, a badass ronin, described by critics as a nihilist and cynic.

The figure of the nihilist and cynic is, however, a Western concoction based on existentialist thought à la Jean-Paul Sartre.

But if you know your Zen, then you also know that we call nihilism and cynicism is but the representation of a highly educated mind that understands non-attachment in a non-conceptual grasping-at-the-mind kind of way to ‘understand’ the mind.

This sounds convoluted as it goes in a ring that teases out the dualist idea of the perceiver and the perceived, which the mind does not distinguish as such, the mind being the grand void, the empty mirror that it is, always reflecting form that doesn’t even exist.

Let’s save this discussion for later. What I want to say here is that there’s something very specific in the aesthetics of the samurai mind-set that I consistently apply to reading cards.

As early as last week already, on my other blog, Taroflexions, I gave away my prime secret, as it were, in terms of what I consider the best method of reading cards that enables you to achieve a level of mastery beyond comparison: The samurai’s Cut.

This year I’ve been celebrating 100 years since the birth of writer Shibata Renzaburo, the creator of the character Nemuri Kyoshiro, by watching an endless string of films featuring the famous ‘full moon cut’, the samurai’s signature blow.

From a martial arts perspective this cut does not entail much sophistication other than the tracing of a circle with the sword. You start at the base, sword pointing to the ground. You turn the blade upwards so that it reflects the opponent’s gaze. You start tracing the moon’s counterclockwise movement. You win everything because the opponent has no patience, and tends to walk straight into the circle of your sword. You get out of the circle yourself when you almost complete it, with blood on your blade. The strike is always on the back of the other.

Now, the reason why I find this fascinating is because of this cut’s relation to how the swordsman gives himself time. He is not in a hurry. There’s a lot to be present for in the tracing of the empty mind.

In this sense the full moon cut is not overrated, as one of Nemuri Kyoshiro’s opponents tells him in Sleepy Eyes of Death: The Chinese Jade, but rather it entails the highest treatise on emptiness.

You make your cuts in accordance, when you live life, have fun, or read the cards, when you can grasp precisely what your empty mind is doing.

As with all stereotypes, in own understanding of fortunetelling and martial arts, what I see happening when the cartomancer succeeds is this:

She gives herself time to check with what the cards mirror about her situation, if she reads for herself, or for another.

Today is my last post on Patheos Agora. The Cartomancer Agora Column has been promoted to The Cartomancer Patheos Individual Blog. What this means for the audience is a shift in my approach, as I want to make new cuts in accordance with what I see is necessary to share, cartomantically speaking, as far as I’m concerned.

In honor of my Zen masters (from Bodhidharma to Hui Neng and Huang Po), I’ve decided to design a new spread called The Full Moon Cut, channeling the spirits of actor Raizo Ichikawa and writer Shibata Renzaburo, who died too early, the first at 37, and the latter at 61, but not before leaving us with shining blades we can use to cut through all illusion.

This is a 10-card spread following the method of reading in line, creating a narrative that is built of a few sentences, formulated according to the following positions:

When you pose a question, you may think that your mind is involved, disclosing fear, desire, worry, strong emotions and the like. In reality, your mind is as empty as it has always been.

What does the tip of your sword point to, when this emptiness is considered?

What weighs on your ‘emptiness’? You can think of this point as a gravity point, anchoring your mind in this awareness.

Card 2: The turned up blade is what the world reflects back at you

Think of this as the agenda that the world, through your perception, hands over to you. If you read for another, then this reflects that person’s agenda.

Cards 3-8: Take your time. These cards tell you what you do with your time

What do you spend your time on?

What do you cultivate?

What do you waste your time on?

Read these cards as one sentence.

Card 9-10: Fullness of being, and strike

Think of these cards as a representation of what makes you say:

You know what the problem is. How do you solve it? What makes you say, ‘I’m nailing it like this’?

The Full Moon Cut in action

Here’s my example of my own Full Moon Cut.

My entry point is the Magician. I know how the mind works, and what tricks it plays. When the tip of my sword enters another body, it has the magic of the trick to it. You never know what it is.

The world reflects back at me the World. How appropriate. No need to waste more words on the implication of this one. It is what is.

I spend time on cutting through illusion, cultivating freedom. Problems still arise, but I let them pass, while investigating into their nature.

I arrive in a chariot, thus, with a book in my hands.

The Popess’s book is my exit point out of the Zen circle. My sword is my word. I strike with the written word on the back of all who are full of concepts, understanding nothing.

Think of the The Full Moon Cut as an exercise in Thusness.

You are here now, watching, and making your cuts in accordance.

Stay tuned for courses and other, or check out the related post The Samurai’s Cut, featuring an original 13-card design with only the suit of swords. 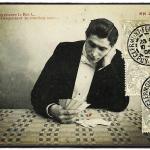 September 12, 2017
The Cartomancer: 5 Ways of Boosting Your Mojo Through Patience
Next Post 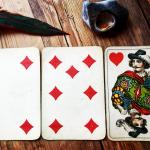