These days I’ve been performing a lot of I Ching divination.

I like the simplicity of the message: not now, not yet, it’s done. Either you’re above it or below it, continuous or broken, connected to disconnected. Meanwhile everything changes. Damn right.

What I also like is the way in which whatever message I get shows up in some form or another in the martial marts movie that I happen to watch later at night. I watch a lot of those, my favorite being Japanese and Chinese movies from the 60s.

What I then do is ask the cards about it.

Last night I watched A Touch of Zen (1971) – a completely misleading English title, as the film has zero do to with Zen.

This one is about a martial arts woman on the run from bad government officials. She hides in a place where a scribe, calligrapher and painter in his 30s, lives with his mother.

The scribe’s mother decides to woo the woman on her son’s behalf. But she gets a firm no. The man is slightly intrigued, and wants to know more. He goes over to the woman’s place and ends up in her bed. Fair enough.

Later they all get embroiled in her bloody affairs, and after some serious kung fu and swords play, the woman vanishes. It turns out she went to a monastery in the mountains where Buddhist monks, martial arts masters, protect her.

The scribe decides to find her. As soon as he approaches the place, a monk comes his way. He places a bundle on a rock for him to find. It’s a baby. Attached to the baby there’s a note: ‘Our fate is done’.

Our fate is done

Now, this is the part that both excites me and entertains the hell out of me. In all these films there’s a lot of talk about fate, when it’s ‘done’, when it’s ‘in the making’, and when it’s ‘not now’.

I took out my Visconti Sforza cards and asked about it, tentatively, leaving out my insistence that whenever we read the cards we must pose a very precise and concrete question. I must confess that sometimes I like the sense of dense clouds over my head combined with my sense of where I keep my own samurai sword. cutting through dense clouds in the dark can be very entertaining…

The cards here were very generous, disclosing precisely what I’ve just watched at the level of plot. I’ll just do a quick reading here following the columns.

An Empress comes to a shelter and awakens the scribe’s unmotivated existence (4 Batons, Empress, Judgment).

I say ‘of some’ value,’ as the scribe is clearly represented here by the ever-hesitant Page of Swords, accustomed to saying ‘I prefer not to…’ to everything, until something shiny comes galloping his way, or his mother pushes him in the right direction.

The two collaborate on the restraining power of the swords and on escape (3 Batons, 4 Swords, 6 Batons).

Is their fate done? Hmm, I’m looking at that Ace of Swords, the surprise card, looking on…

A square of 9 cards is great for describing the status quo. With the 6 Batons in the final position, suggesting strategies of moving forward – or backwards as the case may also be – we can get the notion that, yes, fate is done, under the condition of the big, fat baby at the center of the square pushing change forward where change is due.

Not now, not yet, it’s done

Inspired by this, here’s what you can do:

Think of a situation that’s similar to a question about the status quo of ‘fate’. You can ask about an impossible situation: ‘Is my fate done?’

Draw three cards and read them for these three positions: ‘not now,’ ‘not yet,’ ‘it’s done.’

Make sure, however, to make the positions loose, or else you’ll end up with reading cards one by one and that is never very interesting.

For example, if you got these three cards, The World, King of Cups, 2 Batons, you could say the following:

Your world is not now. Accepting an offer from the King of Cups is not yet auspicious. It’s a done deal that there’s a crossing of aims.

Now, once you have such a line, start thinking about its implications. I bet you’ll find a lot in it. Here, for instance it’s clear that the crossing of aims trumps both the world and the cup. No world cup for you.

It goes to show, in divination it’s not always that the big cards win. Sometimes they get restrained by the taming power of the small.

Thanksgiving is around the corner. Perhaps you want to start yours with some statements that conflate the ideas of ‘not now, not yet, and it’s done.’ 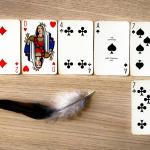 November 14, 2017
Three Ways of Reading Cards: In Line, Singling Out, and Layout
Next Post 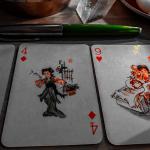 November 29, 2017 LINEAGE OF THE SCRIBES
Recent Comments
0 | Leave a Comment
Browse Our Archives
get the latest from
THE CARTOMANCER
Sign up for our newsletter
Related posts from THE CARTOMANCER