WHEN FORCE IS ON THE DOT 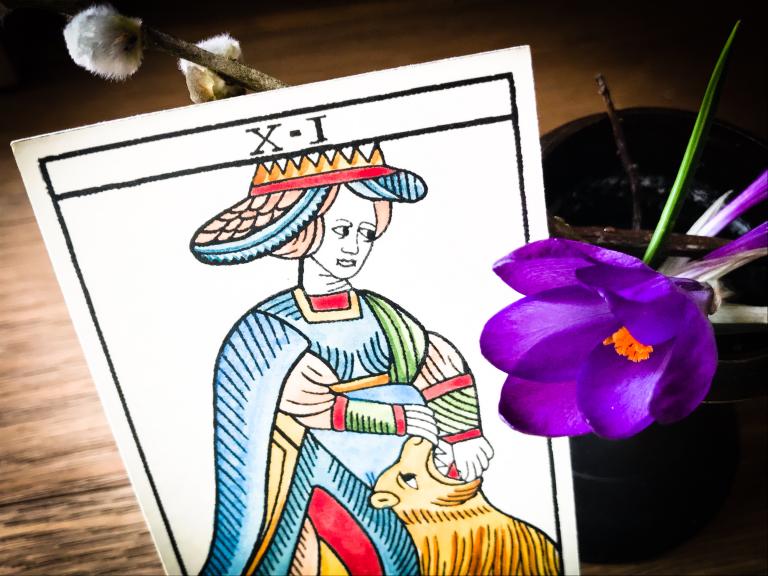 Many see the card of Force as a representation of strength. In invented stories about this card, the woman with the lion is an archetype of power; not social power, as we reserve that for the Emperor, but power that has to do with character and moral spine.

But if we are to look at the card from the position of having firsthand experience of it, rather than from the position of succumbing to other people’s stories about it, then we can see that this card has a very peculiar function, namely, to instruct on how to deal with what is inferior to one’s own standing.

Although acknowledging this as the most immediate response we can have to this card, interestingly enough, in most narratives about it, we find an insistence on other ‘lessons’.

You will hear people talk about this card in terms of a lesson in strategies of overcoming resistance, or a lesson in diplomacy of cautionary nature that we find in the old wisdom: ‘Don’t bite the hand that feeds you’, or even more contrived, a lesson in animal passion and magnetism. There’s no end to what the ‘little white book’ can come up with.

But what interests me in the series of talks Deconstructed Cards is what is closer to what we can term is a correct response to the card; ‘correct’ not in the sense of there being a superior ‘meaning’ to it all, but in the sense of what is there prior to thinking and over-thinking. That is to say, what can we see when there’s nothing there to see, when we deliberately leave out of the equation ‘what we know’, concepts such as power, passion, and possibility? What can we see when we don’t universalize?

In the context of diplomacy, what if the hand that feeds you belongs to an unscrupulous person, dealing you hidden and not so hidden double and triple agendas? Are you going to rise against it and bite it, or are you going to bear it?

In the context of overcoming resistance, what is the appropriate action? To let the inferior who never gets it just be, or force your superior values down his throat?

To what extent do you engage in making preliminary assessments of the situation, before you decide what the correct response is in relation to it?

Your function as a reader of cards is to make such identifications that pertain to discriminating between what the cards suggest is the situation, what the cards point to in terms of positioning, and what the cards address at the level of function.

The card of Force in context and action can tell you something about the quality of resistance, how you position yourself vis-à-vis this resistance, and how you see yourself making the ultimate discrimination between what is superior and what is inferior in your own attitude, or that of the ‘thing’, the ‘creature’ or the ‘beast’ that you think you need to ‘passionately’ overcome.

How annoying are you?

Mostly I think of the card of Force as testing the level of our annoyance. We tend to get annoyed, or we annoy our querents, with anything that suggests serious change or a head-on confrontation with our illusions and fantasies.

We don’t seriously want to engage with the inferior, ‘animal’ side of a simple and primitive, yet strong and superior question.

We don’t want to answer the question of why we eat, why we have children, or why we need an identity, because we intuitively know already that if we were to give an answer ‘before thinking,’ then we would lose the social comfort that anchors our consciousness in dictations:

‘I eat so that I participate in the communality of the act; I have children so that I can mirror my narcissism in them – when they exhibit signs of being successful, that is; there’s another story tagged to the inverse of the situation; I need an identity so I can BE somebody, sell something, have things, or have the power to influence others.’

The card of Force tells you to confront what you know by listening first to the lion’s roar, yelling at you: ‘How do you know this?’, ‘Are you sure this is so?’

If you read for others, be prepared to annoy them. Strength is not about increasing the dominant power, but rather about identifying how you respond to each connecting dot in a situation, so that you end up functioning precisely on the dot, and not outside of what is called for.

People won’t like you much for seeing things as they are and leaving it at that – ‘it rains’ – while adamantly refusing to sympathize with their lamentations: ‘I know it just rains. But it pisses me off’.

Seeing things as they are is never about what comes after the full stop – ‘But it pisses me off’ – for what has liking or disliking to do with clarity?

Stay in the loop. Next course in line is Radiant Reading – the advanced module in reading with the Marseille tarot. 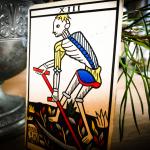 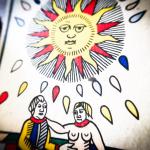 April 11, 2018 WHEN THE SUN IS ABOUT LOVE WITHOUT TRUST
Recent Comments
0 | Leave a Comment
"It was really helpful to see you literally lay out the many different messages you ..."
Laurie READING DIRECTION IN LENORMAND
"You're welcome."
Camelia Elias Playing cards for risk analysis
"Great article on working with Playing Cards. Thank you Camelia!"
CaitrionaReed Playing cards for risk analysis
"Timely. A good reminder (for me) that, ultimately, what is being preached is based on ..."
Beverly Frable The dead serious occultist in the ..."
Browse Our Archives
get the latest from
THE CARTOMANCER
Sign up for our newsletter
POPULAR AT PATHEOS Pagan
1