IN A LEAGUE OF YOUR OWN

This week I made a few comments about the Star and the Sun in the context of one-on-one teaching that I think others here might benefit from hearing, especially since I haven’t seen anyone else offering similar insights.

Clothes on, clothes off. That’s what we see in the Sun card, if it’s the Marseille Tarot we’re working with.

In the Star card we have a steady stream of nakedness, as it were, mirroring the flow of the river. But also here there’s intermittence. Depending on how much disturbance you apply to the surface and density of the water with your outpouring, reflection on, reflection off.

Have you ever thought of why the people in the Sun card are both dressed and undressed?

As yet I haven’t heard anyone proposing any interesting theory about it, but in context, it seems to me that there’s something to it, to the idea of always having an encounter with others either in dressed mode, or in undressed mode.

In one of the examples, the student I said this to had the Magician and the World flanking the Sun. My suggestion was that in the context of assessing the value of an encounter, what one needs to consider is the extent to which now you fake it, and now you don’t.

That’s the beat. Clothes on, clothes off.

As far as the Star goes, the student whose assignment I commented on was discussing the issue of confidence.

Yes. There’s that. But how many understand confidence beyond theory?

If you think about this card, you’ll see that it’s not only about nakedness and vulnerability. Rather, it is very much also about standing alone and being self-reliant.

But here’s what I think: What you can get from the Star standing alone, naked, is the type of confidence that’s called, ‘being in a league of your own.’

It’s a good idea to know what that really means. It’s also a good idea to know that while there’s never any point in comparing – apples and apples or apples and oranges alike – others will insist on doing it, and you will have to take that into account, when you’re ready to flaunt being in a league of your own; not in the sense of letting opinions of what you do influence you, but rather in the sense of learning how you position yourself vis-à-vis what’s being thrown at you, from sincere feedback to flattery for an agenda, or full blown hatred.

To give an example from the spiritual world that’s not very different from the mainstream world of education, everyone is mighty keen on ‘rating the professor’.

‘This is the best,’, ‘this other one sucks, because I’ve tried the other one who was sooo much better’.

While comments such as these can be helpful and have a function, the most helpful is to try things for yourself. Read that book and make up your mind about it for yourself. Take that course and judge its value for yourself.

If you don’t, you might later come to the conclusion that you’ve been listening to the wrong channels of communication and you learn that the train has left the station without you onboard – hence you wasted an opportunity. You might also learn that there’s a lot of energy that people invest in utter nonsense. But let that be your own judgment.

When you’re confident à la the Star, what it means is that you’re in a league of your own, and always already beyond comparison and beyond influence.

You can also develop compassion for the ones who will insist on placing what you do in relation to what others are doing, but then you have to think of your thing as that which has no match.

From my own life experience, for instance, it never ceases to amaze my why people want to compare what I do to what other people are doing.

What is the point? We each mind our business, and although we may have conversations about philosophy or the tarot, at the end of the day, I will never have any interest in looking anxiously over my shoulder, and try to match what these other people do – often just because some think I should, as male academics or diviners tend to have infinitely more authority than a woman.

I could spend an inordinate amount of time being frustrated, but I choose to see the reality of what I do, and that is the fact that what I do has absolutely no match. Others may want to compare, but let that be their loss of breath.

This doesn’t mean that what I do that has no match is better or worse than what others do. It simply means that if something has no match, then it has no match.

The Star has internalized this knowledge, and she keeps going her way, doing her thing, enjoying being in her own league.

The Sun features two people who know their place and when it’s appropriate to have an encounter with their clothes on and when they can afford to display their nakedness.

Being in a league of your own means having distinction that you apply to yourself first.

Thank you to my students in the Nonreading program who prompt me to think further about what I teach. 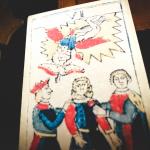 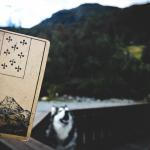 August 25, 2018 WHAT TO DO WITH LITERALNESS
Recent Comments
0 | Leave a Comment
Browse Our Archives
get the latest from
THE CARTOMANCER
Sign up for our newsletter
POPULAR AT PATHEOS Pagan
1

Pagan
The art of the question: sins and virtues
THE CARTOMANCER

Pagan
How to rest in a world that's not...
THE CARTOMANCER
TRENDING AT PATHEOS Pagan