WHEN VOCABULARY IMPRESSES YOU

If there’s a difference between the way people read cards, then it’s all cultural. Method creates this difference to an extent, but culture has more impact.

And what is culture in this context? Language and attitude.

I have the advantage of speaking several languages, having lived in several countries too.

I hear things that the native people don’t.

Where cards are concerned, there’s always a difference in vocabulary that discloses many things:

For example, most of Anglo-American readers refer to the suit of 22 cards in a Marseille Tarot pack as the major arcana. Non-English speakers of the European fortune-telling school call them trumps.

This difference is consistent.

If you’re in the first camp, following the Marseille trend, think: How might it change your view of the cards, if you started referring to the 22 cards as ‘trumps’, rather than ‘majors’?

If you stopped to think about it, what would you understand by the concept of ‘trump’ in the context of divination?

This further invites to this question:

How might it help your perception to know that some readers actually never think of the 22-suit as having anything whatsoever to do with secrets, mysteries, or personal gnosis?

Among the French readers I know, there are some who are heavily invested in the esoteric aspect of the trumps, seeing a secret in every detail that is either linked to the building of cathedrals, or to the unconscious mind that rules you through the inescapable mother/father symbolic dyad.

And yet, among the ones who are not so high-mindedly ambitious, a trump card is just that: A card that has the power to take a trick in a game. It’s not about revealing anything, it’s about winning.

If this never crossed your mind, imagine actually sitting with the cards and not think of the trumps as arcana. Sit with your querent and instead of thinking: ‘I’m going to reveal secrets for this person,’ adopt the warrior’s attitude, and say to yourself: ‘this is a battlefield and I’m going to win this war.’

The war metaphor is a given to me, as I never presume to fix anything for another, but rather, when I read the cards, I have this intent: to overpower whatever the querent brings to the table in the form of a problem or concern. My ambition is to transmit a winning verdict to the person I read the cards for, rather than sit an revel in dream and mystery.

Also, if you import French names into your reading practice, how do you hear the cultural differences between what you make of it, and what the French make of it?

It may be a good idea, once in a while, to question the conceptual premise for the way in which you understand the function of the cards, as this function is inherently described by a specific foreign name.

What does a trump card do that a major arcana card doesn’t?

I let the cards answer this, as here we read cards rather than merely talk about them.

A trump card will not reveal the secret to your impotence due to your ambivalence. But it will point to how you can bottle the shit, mix it up, so that at the end of the day you won’t know the difference; the one that sends you questioning which one to pick, and for what absurd purpose.

Loud but not so expert

In the last couple of years the Marseille trend has grown exponentially, and so has the army of experts.

But you will note that not all who loudly now go French on you, have also changed their old attitude or conceptual frame of reference.

Since we’re comparing cultures, for your own entertainment, you might want to start noticing to what extent attitude actually follows vocabulary.

How does the expert crew actually read a line of three cards, or the French Cross, a tableau or a square of 9 cards, carrying the sound of the fortune-teller’s French into the practice of ’empathic’, ‘ethical’ or ‘intuitive reading’?

It’s an old hat that names mean nothing. What makes the difference in claims to knowledge is not the French that you can now speak, but the attitude that you bring to the table when you can demonstrate how you go from processing the visual and cultural information that the cards present you with to your core wisdom based on essential knowledge that you’re able to extract from the cards.

Knowing your vocabulary is knowing the language of description. This is crucial especially when you’re dealing with images, ambiguous content, and poetic input.

As they say about picking your own battles, the same applies to picking who or what impresses you. Try to know why you’re impressed, why you fall for some words and systems merely because they sound authoritative or exotic in some people’s mouths. Not knowing why exactly you’re impressed amounts to losing the battle with the art of distinction.

I leave you with an apt statement from Ursula K. LeGuin’s book, Late in the Day, where she also compares vocabularies:

“Poetry is the human language that can try to say what a tree or a rock or a river is, that is, to speak humanly for it,in both senses of the word “for.” A poem can do so by relating the quality of an individual human relationship to a thing, a rock or river or tree, or simply by describing the thing as truthfully as possible.

For more comparison, you may like my essay: Three Ways of Reading Cards: In Line, Singling-out, and Layout.

For more on the consequences of being impressionable, see my essay:  When the Lovers are Ridiculous.

Stay in the loop for activities related to cartomancy of virtuosity. 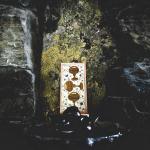 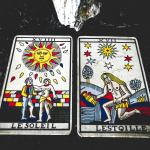 August 17, 2018 IN A LEAGUE OF YOUR OWN
Recent Comments
0 | Leave a Comment
Browse Our Archives
get the latest from
THE CARTOMANCER
Sign up for our newsletter
POPULAR AT PATHEOS Pagan
1

Pagan
The art of the question: sins and virtues
THE CARTOMANCER

Pagan
How to rest in a world that's not...
THE CARTOMANCER
TRENDING AT PATHEOS Pagan