As a counselor I make an effort to motivate. I don’t do validations, even through validation is all the rage.

The reason why I don’t do validation – such as validate others in their beliefs and feelings, sympathize, empathize and all the other ‘path’ words – is because I’ve no interest in putting my words into other people’s mouths.

For instance there’s nothing that gets my blood pressure up more than the narratives that have a premise of putting me on the spot, with the simple, grammatical conceit that’s called ‘using the second person voice’.

‘You feel small, you’ve been hurt, you’re like a beautiful bird in a cage, you’re miserable and confused, your heart is broken, you reach for the knife, you go down to your favorite bar…’

The only thing I get out of this second person address is an instant reaction followed by two words: ‘Fuck off’.

I can’t say that it never ceases to amaze me seeing just how much assumption about ‘me’ there’s out there, coming out of the mouths of complete strangers, because I’m not surprised at all. When people go ‘you are like this’, there’s always the implicit promise, ‘and I can fix it’. Right.

Which brings me to the point I actually want to make, regarding living according to what is always another person’s story.

‘My words, your story’

The second person address is powerful, as it makes feelings tangible. You’ll hear people say or comment whenever someone is ‘in the know’ again about how ‘you’ feel, that they are grateful. They’re grateful because another person can articulate what they’ve been feeling for ages, yet unable to put it into words. ‘I’m grateful for your words,’ people say, without actually thinking of the implication of this gratefulness.

This is where the problem actually is. Whenever someone tells their own ‘vulnerable’ and ‘honest’ story that you so happily relate to, what you do in this relating is actually borrow a story about feelings that are not yours at all. You may think that another person’s assumptions about you are one hundred percent correct. You may even feel validated and supported in your feelings, but the reality of it remains that there’s no such thing as others having access to what you are and how you feel.

We go with other people’s stories of heartbreak, misery, and living on a couch, because they make it easy for us to ‘accept’ ourselves, but in reality, whenever we fall for the story of ‘me’ as told by another, what we do is evade the work of looking at ourselves on our own.

The fact that you can’t quite articulate your feelings is actually a great state to be in, as it means that you’re free of framing. As language frames what we feel, language is not reliable for the simple reason that it operates with shifting signifiers. When people tell you that you feel small, what does that actually mean? That you fail to fit your britches (the British informal designation of small for underwear); that you’re having a problem with scaling (if small is here, then big is here too, and you had better ‘feel’ that); that you’re insignificant and unimportant, and it’s too bad that no one respects you? How can anyone capture into their words just what you feel?

When people tell you a story about how you feel, it’s worth considering the fact that they have no real access to how you actually feel. It’s a story they serve up for a particular motivation: Validating you in your feelings means motivating the other to profit from your ‘confusion’.

It’s also worth considering that it’s never a given that the people who are good with words are also wise. Possessing linguistic competence and the ability to frame a story does not equal clarity and insight. Being good with words simply means being good with words, cultivating eloquence and the art of speech at best, and rehashing the worst clichés at worst. Wisdom is something else. In my book wisdom resides in knowing your place.

People make all sorts of proclamations – big is better than small, the cultural and ‘spiritual’ story goes – and statements of embodying specific identities that are then broadcast as ‘desired’ abound. But is ‘relating’ to the shoutouts the same as what you actually feel? What you relate to is the words of another, framing a story for you of ‘you’, because that’s what makes the transactional world go round. If you can’t know what and who you are, or where you’re going and what ‘purpose’ you have in life, you can be sure that others out there are more than willing to enlighten you. At a small cost.

What do the cards say?

In my work with the cards, people often approach me with this ad verbatim request: ‘What do the cards say about me?’

I squint, thinking to myself that it’s nice to have an intermediary: ‘I am not saying you’re like this. The cards say it.’ But I prefer to not follow this kind of thinking with the action that enforces it. ‘Yes, the cards say you’re like this…’ I may come close to it and even write about ‘personality tests‘ because I’m a storyteller, but at the end of the day, I don’t let the words I put into my own mouth win the argument over what reality is. Therefore I tend to disregard the request for a descriptive narrative of what the cards have to say about another person. I do that in the name of personal professional integrity.

‘He left me abruptly, and I’m not sure how I feel about it’.

Three cards fell on the table:

The Empress, the Sun, and the Lovers

I read them in this way:

There’s nothing to feel. You’re your own sovereign. You could feel small, scaled down in size and put on a par with another of your kind, but is subjecting yourself to a comparison that turns the odds against you useful to you?

Think about the man who leaves an Empress, thinking that she is comparable, subject to being weighed and measured against another. Think about the suspicious man who ultimately sees both women pretty small in size.

If we must press the small/big button, then let’s say that going from full power to divided identity is not useful. Being stunned and thrown into self-doubt about the man who chooses small is not useful either.

If you’re not sure about what you feel, you can look at how being passed over impacts on your sovereignty. Is there an impact at all, or are we dealing with a story of regret – regret because the other you love is unable to see your actual size? Why would you even want to be with a man who thinks you’re half the size you are, and ultimately less than that one he chooses over you? Go cry over that, if you think such a regret enriches your life.

Words in your mouth

The point with this reading is to demonstrate that we can give efficient counsel, without putting words into the other person’s mouth about what they feel, how they’re doing, and, what’s worse, how successful they’re at either failing – delicious trendy story of the value of the vulnerable – or at acknowledging their so-called shadows.

Reading cards is not about validation of any kind. It’s about motivation. It’s about how you inspire the other to see things as they are, not to hop on your story of eloquence in which the heartbreak is a bestselling act, making you a bestselling author, standing there all shining and basking in the glorious rays of your own seductive words. Reading cards is about asking provocative questions: ‘How do you feel about your feelings being nothing other than another person’s words for them?’

If you don’t know how you feel, be happy, because in that ‘not-knowing’ you can find a measure of true freedom; freedom from words, words that are never yours or that tell a true story about you.

You are not your words, nor are you the words of another about you. How is that as a sale’s argument?

Stay in loop for cartomantic courses of the nasty Zen kind. 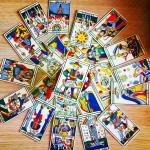 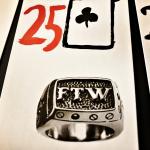 May 2, 2019 LOVER'S HATRED
Recent Comments
0 | Leave a Comment
"It was really helpful to see you literally lay out the many different messages you ..."
Laurie READING DIRECTION IN LENORMAND
"You're welcome."
Camelia Elias Playing cards for risk analysis
"Great article on working with Playing Cards. Thank you Camelia!"
CaitrionaReed Playing cards for risk analysis
"Timely. A good reminder (for me) that, ultimately, what is being preached is based on ..."
Beverly Frable The dead serious occultist in the ..."
Browse Our Archives
get the latest from
THE CARTOMANCER
Sign up for our newsletter
POPULAR AT PATHEOS Pagan
1