WHAT RULES YOU FROM THE INSIDE

WHAT RULES YOU FROM THE INSIDE September 11, 2019 Camelia Elias

Why the reading of cards is endlessly fascinating is not a mystery. As soon as you grasp the idea that all images are about process, it’s not difficult to understand why you like to read the cards.

Think of your dreams and their symbolic content. Although we jump at interpretation, the truth of the matter is that the image-content of our dreams is also process. We process the inside, as it were, of our unconscious.

Although I’m not keen on Tarot clichés, there’s a phrase that I like from the world of positional readings, that is to say, when we lock cards in pre-determined signification as a premise for how the individual card that lands in the said position is supposed to act.

This phrase is ‘what rules you from the inside.’

Although I only rarely read the cards according to positional spreads – the Celtic Cross being one such – I like to think of what is processed when I consider the idea of what rules me from the inside.

If all images are about processing by default – the reason being the fact that we don’t consciously use meta-language when we look at images, even though it is language that we use to process what we see – what interests me is the idea that ‘what rules me from the inside’ is present all the time, not just when a card happens to land in the ‘house’ for this meaning.

That is to say, unless we play games with ourselves, we hardly ever process an image with this introduction, for instance: ‘I’m looking at the image of the Magician.’ What we do instead is go straight to looking: ‘I see a Magician’, we say, while unconsciously allowing our brain to process the information, a processing, however, that’s entirely based on linguistic precedence. We have learnt at some point that there’s such a thing as a Magician, who looks like such and such, and behaves like such and such. Thus our understanding of the Magician is purely metaphorical.

When it gets interesting is when we realize the fact that such and such being like such and such is not anchored in any reality, but rather in a continuous string of symbolic representations.

I’m thinking about all this as I look at Maurice Baskine’s ‘alchemical’ cards called The Tarot of the Conscience.

All I see is petroglyphs. But I also see language. While ‘petroglyphs’ is also language fair and square, the Page of Batons (Master of Balance), Ace of Cups (Root of the Powers of Fire), and 8 Swords (Lord of Impositions), is language that messes with my petroglyphs – not to mention the expected symbolic associations: The Ace of Cups is about the root of fire? Hmm…

It’s a reading all right, though in most cartomantic circles the descriptive level is followed by some measure of analysis and reflection and then a whole lot of mystery. Analysis itself has a hard time hitting the heart, but the secret never misses a mark, as in this scenario:

The sitter: ‘If what you say is true, that he doesn’t love me anymore, then are you also saying that’s it’s impossible to win him back?’

The cartomancer: ‘Well, not exactly, because you see, there’s this thing called language, the language that can psych you up into imagining all sorts that can then be projected into the realization of a desired outcome.’

The sitter: ‘Oh, this sounds just like the thing I need.’

Now, the straight psychoanalysts, consecrated by culture, would swear that it’s not possible to bypass language. Zen masters, the opposite. Although I hold zero beliefs about anything and anybody, I believe the Zen masters, precisely because I find that in the entire occult world they turn out to be the best magicians, simply because they know exactly what language is and what it does to our dreams.

There’s great insight in the obvious: ‘when you dream you dream, when you eat you eat, and when you walk you walk.’

When you read cards you read cards. If you just read the damn cards with the knowledge that looking at images is all about process, not interpretation and even less dogma, then you’ll know what to say about ‘what rules you from the inside,’ displaying also the kind of precision that you can only dream of.

There’s more between heaven and earth than the reading based on ‘interpretation,’ the one that may sound like this: ‘The page of batons is well inclined towards the nasty man of the world of swords.’

Jolly good. We can now all stop overthinking, and let process be about what it wants to be. 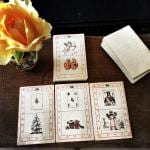 September 4, 2019
ARRIVING AT THE SCENE WITH THE GUN
Next Post 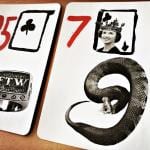 September 22, 2019 EUPHEMISMS IN LENORMAND
Recent Comments
0 | Leave a Comment
"It was really helpful to see you literally lay out the many different messages you ..."
Laurie READING DIRECTION IN LENORMAND
"You're welcome."
Camelia Elias Playing cards for risk analysis
"Great article on working with Playing Cards. Thank you Camelia!"
CaitrionaReed Playing cards for risk analysis
"Timely. A good reminder (for me) that, ultimately, what is being preached is based on ..."
Beverly Frable The dead serious occultist in the ..."
Browse Our Archives
get the latest from
THE CARTOMANCER
Sign up for our newsletter
POPULAR AT PATHEOS Pagan
1

Green Witch Plant Profile: Rosemary For...
3 Pagans and a Cat
Related posts from THE CARTOMANCER