Concepts at odds: the intuitive, the spiritual, the plain clear

Concepts at odds: the intuitive, the spiritual, the plain clear April 24, 2020 Camelia Elias

Yesterday I launched my new book, Tarot Tracings: Essays on literature and divination. In connection with the launch – part as a live event on Facebook and part as ‘explanatory note’ on Instagram – the gist of the message was that the fortuneteller is not spiritual, but rather invested in clarity. So my talk about the book – which is an exploration of tracing the surface of divination in authors Italo Calvino, Robert Browning, W.B. Yeats, and Rachel Pollack – was in fact a Zen talk about the need to distinguish between what we’re doing and what we think we’re doing when we read the cards. Because this is an important discussion, I allow myself to reproduce a dialogue that took place in the Aradia Academy alumni group, between brilliant cartomancer Dorian Broadway, and myself. Dorian had this question for me, and the answer I gave may be of use to others:

“Camelia, you mentioned in your live talk that you are zen rather than spiritual.

I pulled this from Merriam-Webster on zen:

1: a Japanese sect of Mahayana Buddhism that aims at enlightenment by direct intuition through meditation

2 or zen : a state of calm attentiveness in which one’s actions are guided by intuition rather than by conscious effort

And this from Merriam-Webster on spiritual:

1: of, relating to, consisting of, or affecting the spirit : INCORPOREAL

2a: of or relating to sacred matters

b: ecclesiastical rather than lay or temporal

4: related or joined in spirit

5a: of or relating to supernatural beings or phenomena

b: of, relating to, or involving spiritualism.

Now let me also ask you this: Is your experience of what you conjure into language ‘of the outside’, or ‘of the inside?’ How? Convince me that such a thing exists, that is, things like ‘inside’, or stuff, aka spirit ‘out there’. WTF is all that about? If we have access to ‘spirit’, it’s because we think ‘spirit’. AND, since when is what we think reality? Get real here… I tell everybody. So, the difference between ‘direct experience’ and ‘spiritual experience’ is one of language and the degree to which we live and see phenomena through language; language that describes what we experience.

AND, lastly, now I ask you: Since when is language the thing itself? The real? Let’s get real again, amen, and if we are to make an effort, then let that effort be about being clear, or standing clear of all the gross bullshit out there. There’s no ‘inside’, ‘inner’, ‘spiritual’, ‘shadow’, ‘mystery’ or ‘the unconscious’. The unconscious is as inaccessible as the real, that’s why it’s called the unconscious. If you ‘make the unconscious conscious’, to go with this popular illusion right now, what you do is place more layers of fiction on top of what your regular linguistic fiction is already all about. You think can you make your inner, spiritual, shadow, unconscious life conscious? Good luck to you. The only thing you CAN have access to is HOW you name your shit on the surface of life. Know it for what it is, not for what it isn’t, and you’ll be a sage. There’s no ‘spiritual’ dimension to our linguistic strategies and tactics, manipulations and enchantments. It’s just pretty words that we use to comfort or to kill with. And that’s that.”

To give an example that I also offered: The corona virus is a virus. It’s not a ‘message from the universe,’ ‘a lesson’, ‘an opportunity to grow’, ‘an initiation,’ ‘an alchemical process,’ ‘shedding the old self so that a new self can emerge,’ ‘the Armageddon’, ‘the end of the world’, or ‘the end of capitalism’. It’s a virus. All the other intangibles related to our numerous beliefs about what this crisis is all about are anchored in fictions, wishful and willful thinking. Now, obviously, it’s not good business to say that a pandemic is devoid of meaning, financial or spiritual business alike, but when it comes to clarity, the only statement that we can provide in actuality is to simply say it like it is, the corona virus is a virus.

Extrapolate from this now to the practice of fortunetelling, something that’s actually anchored in calculating angles based on context, image text, and story text. When I read fortunes I permute with variables of risk and probability. Game theory 101. There’s nothing spiritual about reading cards.

Here’s an example: Woman meets man. ‘Cosmic connection,’ she says. ‘But how long will it last?’ I understand two things from this question before I let any cards hit the table: 1) If it’s cosmic, ‘what if you can’t handle it?,’ so it’s fair to be anxious about recognizing your human limitations in the face of the big thing. 2) If ‘it feels spiritual’, then why worry at all? Isn’t belief in the cosmic order of things enough? The assumption here is that the woman can’t trust her own words about the relationship – ‘it’s a cosmic connection’ – because if she did, she would not come to see me. Regardless of my preliminary analysis of the basic human concern here, I let three cards fall on the table.

The Sun, Ace of Swords, the Moon.

I said the following: ‘The cosmic connection will last half a day.’ ‘Eh?,’ the woman exclaimed, making ‘goo-goo’ eyes. ‘What do you mean by ‘half a day’? I explained. ‘We go from daylight to the night. That’s 12 hours. In between we got the sword. We’re with the ‘fast and furious’ here.’ ‘So, it won’t even last a year?’ the woman wanted to know in a tone of disappointment.’ ‘Not very bloody likely,’ I said, and left it at that. And no one said a word about the cosmic.

And so it goes. I call this reading a ‘clear reading’. If it’s ‘spiritual,’ or based on an ‘intuitive channeling’ of a mean fortuneteller, yet full of compassion that came before me, I haven’t clue. What I do have a clue of is precisely what I gave my attention to: the cards, the context, and the caliber of my precise shot.

Try being less spiritual in your readings and more clear on what you actually see is happening, and take it from there. 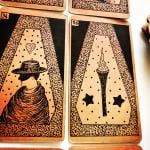 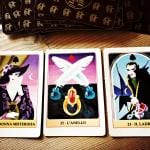 May 7, 2020 Magicians, marriages, and conmen
Recent Comments
0 | Leave a Comment
Browse Our Archives
get the latest from
THE CARTOMANCER
Sign up for our newsletter
POPULAR AT PATHEOS Pagan
1